After months of buildup, city of Portland moves in to clear homeless camp at Laurelhurst Park

Police officers, park rangers and biohazard crews were greeted by a crowd of activists, angry that the city is clearing camps amid a housing crisis. 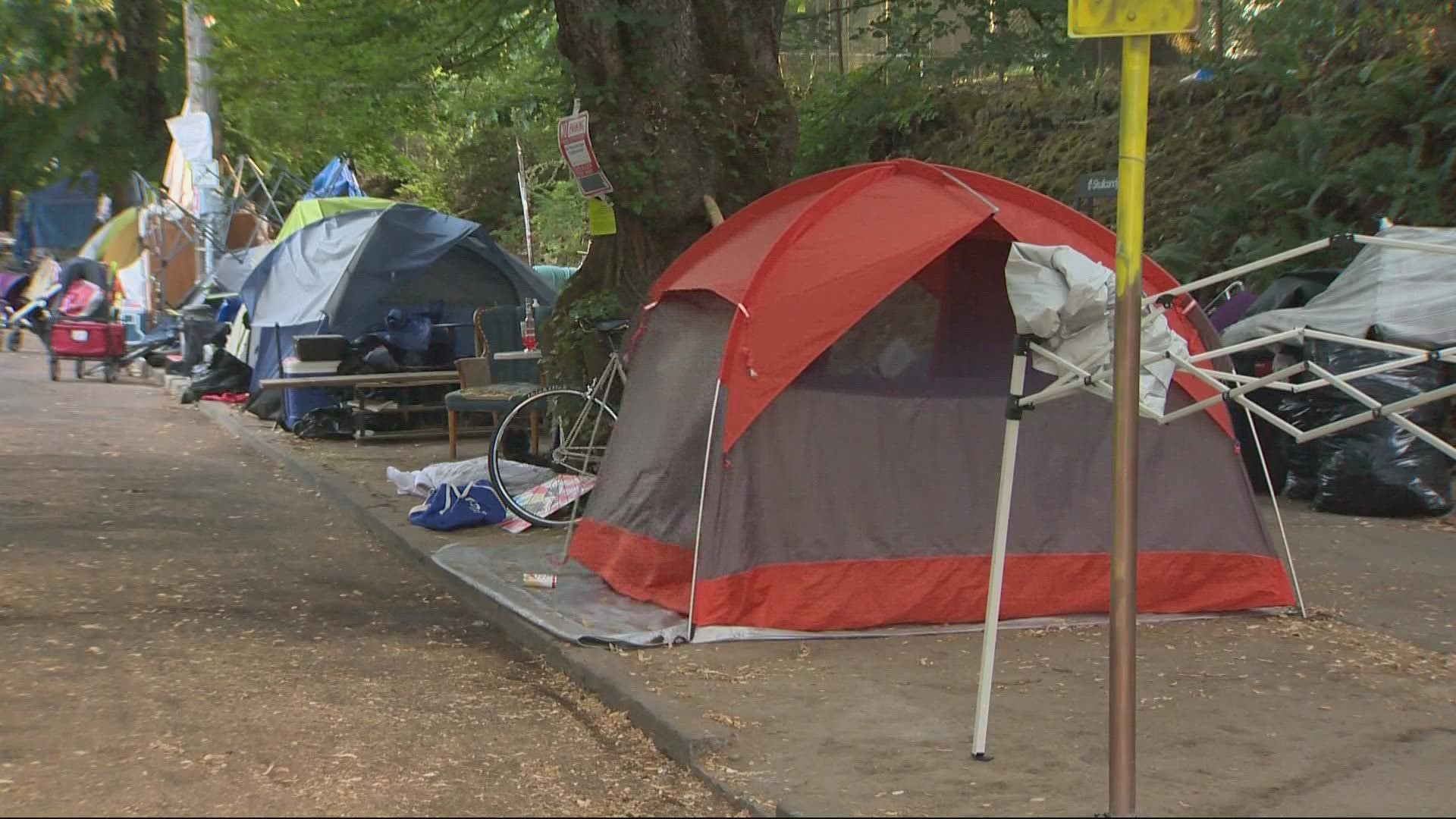 PORTLAND, Ore. — After months of tense public buildup, the city of Portland moved in on July 29 to clear dozens of people from a large homeless camp along Laurelhurst Park.

Police officers, park rangers and at least eight biohazard crews arrived in the Southeast Portland neighborhood around 8 a.m. They were greeted by a crowd of activists, angry that officials are clearing camps amid a housing crisis and a pandemic.

72 hours after the city of Portland posted eviction notices at this longstanding homeless camp, @PortlandPolice & biohazard crews have arrived at Laurelhurst Park.

40+ activists are attempting to stop the camp from being cleared.

“We have to relocate and start over,” said Kelli Harvey, as she packed up her things. She noted she’d hoped to spend her day helping her son get into rehab for his heroin addiction but now her focus had shifted. “You know, these sweeps just take us back a few steps.”

Activists, many of whom have been stationed at the camp for months to try and prevent it from being cleared, stood toe to toe with police. Some chanted and hurled obscenities. At one point, a woman who identified herself as Mama Zeigh laid down in front of a truck from Rapid Response, the biohazard firm contracted by the city to clear homeless camps.

“[Officials should give us a place of permanence,” Mama Zeigh said. “Even an acre of land where we could put plywood and be private and let us live like this without people coming in with cameras. We don't want to be in the public.”

Indeed, the camp has been in the public eye for nearly a year.

Laurelhurst has a long history with homeless camping, but things escalated during the pandemic. Dozens put down roots around the park in late summer 2020. Activists followed, demanding the city let them stay.

For months, officials largely complied. In May, representatives from all five city commissioners’ offices held a meeting with members of the activist group Stop The Sweeps.

Meanwhile, neighbors, who weren’t invited to that meeting, argued the camp was unsafe. For months, they've documented fires, fights, break-ins and threats.

Nothing changed, until this week. Monday, the city posted lime green eviction notices, informing campers they had 72 hours to pack up and leave before crews came in to clean the site.

Commissioners wouldn't do interviews, but they released statements citing multiple, recent reports of people in the camp carrying, loading and brandishing guns. A joint statement from all five commissioners, including Mayor Ted Wheeler, called the camp "unsafe and unhealthy for everyone involved".

“I want to know why it's taken so long and why the city wasn't better prepared,” said TJ Browning, safety chair of the Laurelhurst Neighborhood Association. “We've been telling them about these conditions for almost a year.”

Crews Thursday worked well into the afternoon, clearing the camp. Representatives were on hand from several agencies that help people get access to housing and treatment services, including Cascadia Behavioral Healthcare.

In their joint statement earlier this week, city commissioners reiterated plans to open six “safe sleep villages” throughout the city, by the end of 2020. Officials haven’t yet chosen the locations of those villages. While people cleared from future camps could hypothetically migrate to them, that wasn’t an option for those cleared from Laurelhurst.

“We recognize the challenging times we are in and that vulnerable populations have many historic and recent reasons to distrust government. As such, this decision was difficult to arrive at and is also not a solution,” read that joint statement from Portland’s city council. “It is necessary to intervene at this moment to maximize public safety, but it is not a solution.”