Experts say there is about a 1-in-10 chance that another 7.0 quake could hit Southern California within the next week. 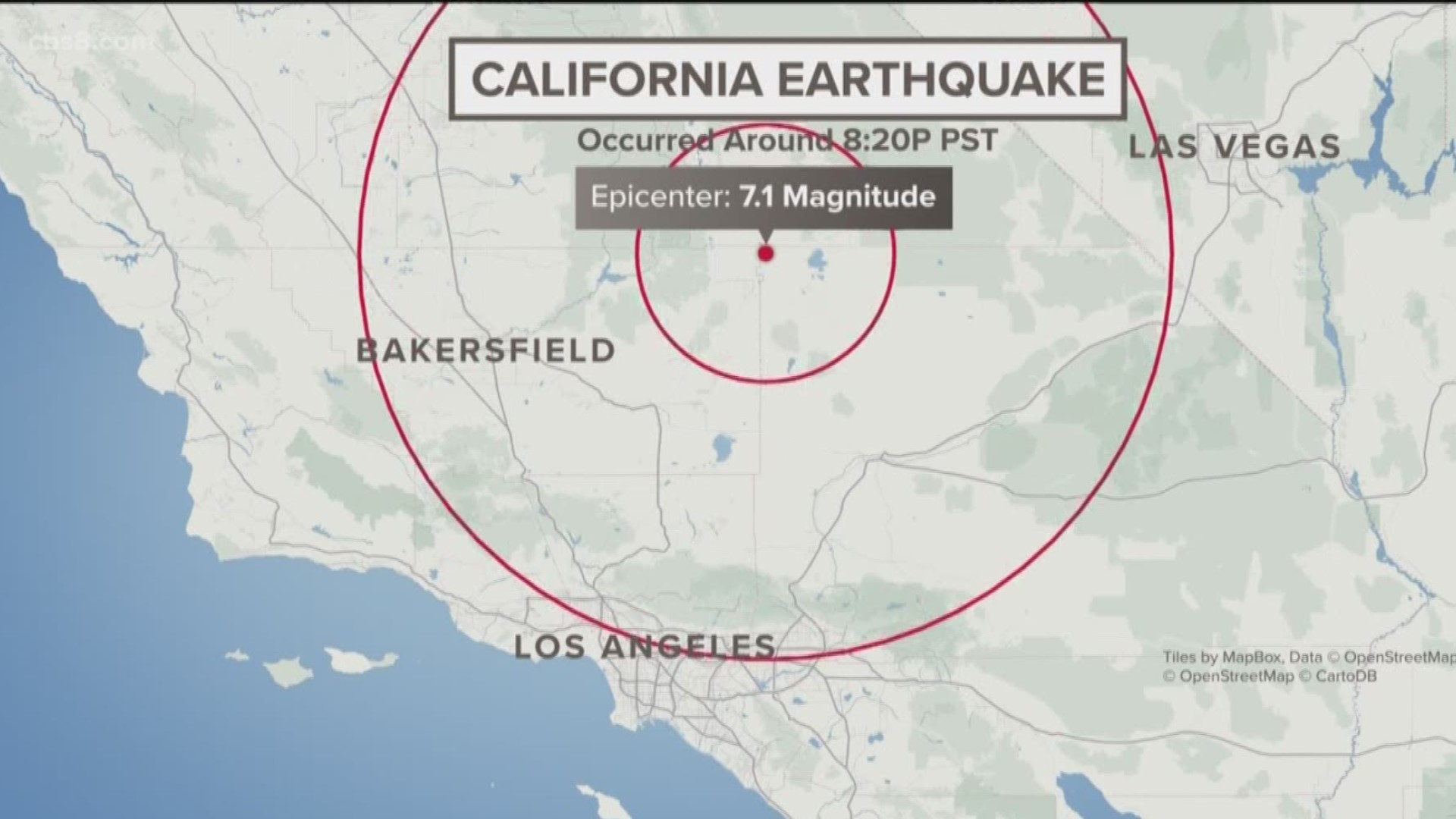 A quake with a magnitude of 7.1 jolted much of California, cracking buildings, setting fires, breaking roads and causing several injuries while seismologists warned that large aftershocks were expected to continue for days, if not weeks.

The Friday night quake — preceded by Thursday's 6.4-magnitude temblor in the Mojave Desert — was the largest Southern California quake in at least 20 years and was followed by a series of large and small aftershocks, including a few above magnitude 5.0.

The quake was centered 11 miles from Ridgecrest, a Mojave Desert town 150 miles from Los Angeles that saw building damage, fires and several injuries from the earlier quake.

Officials in San Bernardino County reported homes shifting, foundation cracking and retaining walls coming down. One person suffered minor injuries and was being treated by firefighters, they said.

Lucy Jones, a seismologist with the California Institute of Technology's seismology lab, tweeted that the quake was part of the sequence that produced the earlier quake.

The new jolt was felt in downtown Los Angeles as a rolling motion that seemed to last at least a half-minute. Reports said the quake rocked chandeliers and rattled furniture as far away as Las Vegas, and the U.S. Geological Survey said it was felt in Mexico as well.

The press box at Dodger Stadium lurched for several seconds, and fans in the upper deck appeared to be moving toward the exit. Enrique Hernandez of the Dodgers was at-bat in the bottom of the fourth when the quake occurred. He stepped out of the batter's box, but it wasn't clear if that was because of the quake.

An NBA Summer League game in Las Vegas was stopped after the quake. Speakers over the court at the Thomas & Mack Center continued swaying more than 10 minutes after the quake.

The quake came as communities in the Mojave Desert tallied damage and made emergency repairs to cracked roads and broken pipes from the earlier quake.

Hours earlier, seismologists had said that quake had been followed by more than 1,700 aftershocks and that they might continue for years. However, that quake would now be considered a foreshock to the Friday night temblor.

Andrew Lippman, who lives in suburban South Pasadena, was sitting outside and reading the paper when Friday's quake hit.

"It just started getting stronger and stronger, and I looked into my house and the lamp started to sway. I could see power lines swaying," he said. "This one seemed 45 (seconds)... I'm still straightening pictures."

The hospital was prepared to help women in labor and to give triage care to emergency patients. Fifteen patients were evacuated to other hospitals after the quake, Glenn said.

The quake did not appear to have caused major damage to roads and bridges in the area, but it did open three cracks across a short stretch of State Route 178 near the tiny town of Trona, said California Department of Transportation district spokeswoman Christine Knadler.

Those cracks were temporarily sealed, but engineers were investigating whether the two-lane highway was damaged beneath the cracks, Knadler said. Bridges in the area were also being checked.

The Ridgecrest library was closed as volunteers and staff picked up hundreds of books that fell off shelves. The building's cinderblock walls also had some cracks, said Charissa Wagner, library branch supervisor.

Wagner was at her home in the small city of 29,000 people when a small foreshock hit, followed by the large one, putting her and her 11-year-old daughter on edge.

"The little one was like, 'Oh what just happened.' The big one came later and that was scarier," she said.

The earthquake knocked over a boulder that sat atop one of the rock spires at Trona Pinnacles outside of Ridgecrest, a collection of towering rock formations that has been featured in commercials and films, said Martha Maciel, a Bureau of Land Management spokeswoman in California.

Meanwhile, the nation's second-largest city revealed plans to lower slightly the threshold for public alerts from its earthquake early warning app. But officials said the change was in the works before the quake, which gave scientists at the California Institute of Technology's seismology lab 48 seconds of warning but did not trigger a public notification.

"Our goal is to alert people who might experience potentially damaging shaking, not just feel the shaking," said Robert de Groot, a spokesman for the U.S. Geological Survey's ShakeAlert system, which is being developed for California, Oregon and Washington.

The West Coast ShakeAlert system has provided non-public earthquake notifications on a daily basis to many test users, including emergency agencies, industries, transportation systems and schools.

The trigger threshold for LA's app required a magnitude 5 or greater and an estimate of level 4 on the separate Modified Mercali Intensity scale, the level at which there is potentially damaging shaking.

Although Thursday's quake was well above magnitude 5, the expected shaking for the Los Angeles area was level 3, de Groot said.

A revision of the magnitude threshold down to 4.5 was already underway, but the shaking intensity level would remain at 4. The rationale is to avoid numerous ShakeAlerts for small earthquakes that do not affect people.

"If people get saturated with these messages, it's going to make people not care as much," he said.

Construction of a network of seismic-monitoring stations for the West Coast is just over half complete, with most coverage in Southern California, San Francisco Bay Area and the Seattle-Tacoma area. Eventually, the system will send out alerts over the same system used for Amber Alerts to defined areas that are expected to be affected by a quake, de Groot said.

California is partnering with the federal government to build the statewide earthquake warning system, with the goal of turning it on by June 2021. The state has already spent at least $25 million building it, including installing hundreds of seismic stations throughout the state.

This year, Democratic Gov. Gavin Newsom said the state needed $16.3 million to finish the project, which included money for stations to monitor seismic activity, plus nearly $7 million for "outreach and education." The state Legislature approved the funding last month, and Newsom signed it into law.