Leaders with the city and the Port of Skamania County are restoring part of the city's waterfront along the Columbia River. 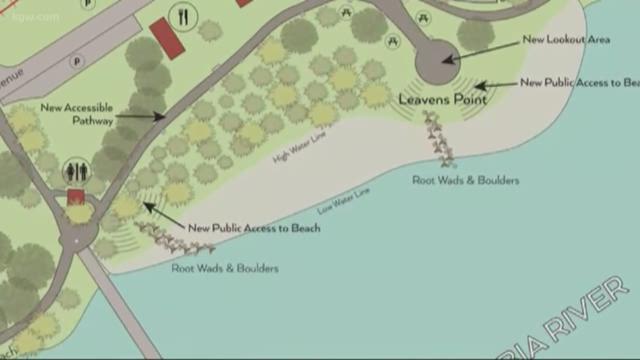 STEVENSON, Wash. -- A change to the waterfront in Stevenson, Washington could draw more visitors.

Leaders with the city and the Port of Skamania County are restoring part of the city’s waterfront along the Columbia River.

The area, just southeast of downtown, encompasses roughly 1,000 feet of shoreline near the port. The land was previously less accessible due to the terrain.

“Stevenson has access, but it had been totally closed off in the past,” said Stevenson city planning director Ben Shumaker. “This is exciting to open up some of that access and get a project that people are going to be able to enjoy.”

The project, which has evolved over time, will take several years to complete. In addition to more access points for the public, the restoration project includes a small beach and an improved trail along the shore. Other additions include new lighting fixtures and public art, according to the Port of Skamania County website.

Leaders hope the restored waterfront will continue to spur tourism in the area and connect downtown businesses and restaurants with the river.

“Seventy-five cents of every dollar spent in Stevenson is spent by a tourist. The more that we can accommodate them but also provide useable spaces that our residents can enjoy, the better a project it is,” Shumaker said.

While the project has been in the works for some time, Shumaker says that Stevenson’s economy may be impacted due to the Eagle Creek wildfire. The fire scorched thousands of acres across the river and has since closed several popular areas on the Oregon side of the Gorge.

“We’re expecting more visitors to come to this side to find out waterfront here. This is a way to accommodate those visitors and is something that we are looking forward to,” Shumaker said.

Erik Von Eggers, who was visiting Stevenson from Portland with his girlfriend, expressed interest in returning to the waterfront once the restoration was complete.

“I think that would be awesome. I think it would definitely add to the tourists,” he said. “If there’s a beach and it’s a perfect day, and the weather is on par, I don’t see why not.”