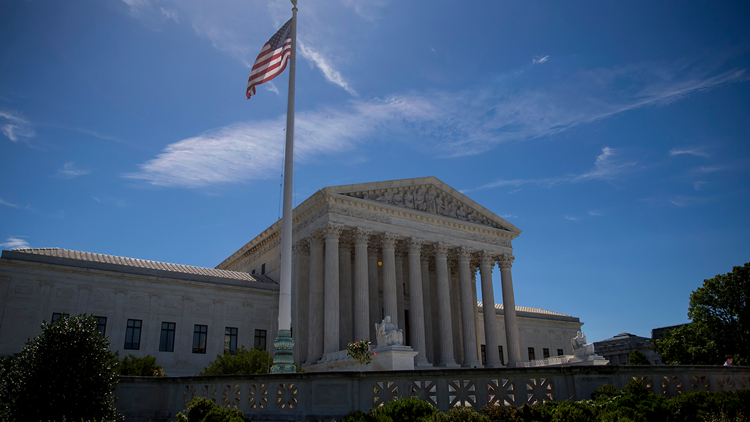 Photo by: Eric Thayer/Getty Images
A flag flies outside the U.S. Supreme Court.

While some view the decision as a victory for employers, others see it as a further weakening of the ability to fight for fair employment standards in an economic climate where many Americans are living paycheck to paycheck.
Author: Kat Khoury (MagnifyMoney)
Published: 3:29 PM PDT May 23, 2018
Updated: 7:15 AM PDT May 24, 2018

This week’s U.S. Supreme Court decision holding that private-sector employees may no longer unite to bring class or collective actions against an employer has shaken the historical ground that workers’ rights stand on.

Some of the nation’s 126 million private-sector workers fear what they see as a reversion to 1920s and ‘30s “yellow dog” contracts that offered take-it-or-leave-it arbitration agreements during one of our nation’s toughest times for the working class.

The decision came on Monday, the vote 5-4, with Justice Neil Gorsuch, who joined the Supreme Court last year, writing for the majority.

While some view the decision as a victory for employers, others see it as a further weakening of the ability to fight for fair employment standards in an economic climate where many Americans are living paycheck to paycheck.

This ruling comes a year after the 10 largest settlements in employment-related categories reached a record high $2.72 billion, according to the 14th annual edition of the Workplace Class Action Litigation Report by Seyfarth Shaw LLP, a Chicago-based law firm. The aggregate settlements of the top 10 are almost $1 billion more than they were in 2016, despite 2017 being a more favorable year overall for employer rather than employee victories, the 2018 report notes.

“I think it’s going to potentially reduce a lot of very costly litigation for employers,” said

Suzanne Boy, an employment law attorney with Henderson Franklin Attorneys at Law in Fort Myers, Fla. “While it certainly does not erase the employees right to bring a claim, it just limits the potential for them to bring them as a group essentially.”

Attorney Benjamin Yormak, who represents employees and is a board-certified expert in labor and employment law, noted that the point of a class or collective action is to streamline the litigation for consistency in the results and to save on costs.

“But the ruling from the Supreme Court does the exact opposite,” said Yormak, an attorney based in Bonita Springs, Fla., who often represents employees with wage and hour disputes.

While Yormak said he believes wage and hour litigation will be the hardest hit, other workplace conditions could become more difficult to fight as well.

Some members of Congress and candidates for office voiced their concerns this week on social media.

The laws of our land should protect the people, not corporations. This disgraceful #SCOTUS decision will undermine workers' rights for generations to come and further rig the system for corporations and billionaires. https://t.co/IFTcMHqwM5

The billionaire-backed GOP agenda keeps handing over power to corporations over working families. This will leave so many workers and women unable to enforce their basic rights when they face wage theft and sexual harassment. https://t.co/nypxkCuL76

#SCOTUS ruling yesterday that prohibits workers from banding together to challenge violations of federal labor laws is a step backwards for workers’ rights. https://t.co/TFXSfnQgRn

The Federal Arbitration Act, enacted in 1925, specifies that agreed-upon individual arbitration contracts must be enforced, unless that agreement violates another federal law, which, according to those on the dissenting side, is the National Labor Relations Act, which was enacted 10 years later.

The NLRA provides “the right to self-organization, to form, join, or assist labor organizations, to bargain collectively through representatives of their own choosing, and to engage in other concerted activities for the purpose of collective bargaining or other mutual aid or protection.”

In what Yormak calls an “epic case,” the problem is that the NLRA and the FAA “are not in harmony with one another on this issue.”

Both sides were looking for direction from the Supreme Court, but the outcome was not what he and employees such as those he represents had hoped for, Yomak says.

Who’s affected by the ruling?

Expect a dramatic increase in the number of employers who require arbitration agreements to be signed by their employees, both Boy and Yomak said.

The Economic Policy Institute, a Washington, D.C., nonprofit think tank, notes: “For over eighty years, the National Labor Relations Act has guaranteed workers’ right to stand together for ‘mutual aid and protection’ when seeking to improve their wages and working conditions. However, today’s decision clears the way for employers to require workers to waive that right as a condition of employment.”

According to the EPI, 56.2 percent of private sector employees are already subject to arbitration proceedings that are laid out by their employer, and of those employers, 30 percent include a class-action waiver.

With this new ruling and the number of employers who require such agreements projected to rise sharply, the ways they might implement them could be less-than-transparent, such as the blanket take-it-or-leave-it policies emailed to employees that sparked the three cases that were consolidated by the Court and that served as the basis for the decision.

The EPI is asking Congress to ban mandatory arbitration agreements and class and collective action waivers.

“Workers depend on collective and class actions to combat race and sex discrimination and enforce wage and hour standards,”Celine McNicholas, Director of Labor Law and Policy for the EPI said in a statement. “It is essential to both our democracy and a fair economy that workers have the right to engage in collective action.”

For employees, attorneys recommend having awareness and taking a few steps, such as these:

Watch out for class-action waiver. “If an employee is presented with an arbitration agreement, he or she should certainly look closely as to whether or not one of these waivers is in there, because they may not be,” said Boy. She adds that if an employee refuses to sign it, an employer can rescind the job offer.

Find out the financial ramifications. Boy advises employees to look at the ramifications from a cost perspective, such as how the cost shifting is defined and if it’s split in half between employer and employee.

Pay attention to other provisions. Determine if there is a jury trial waiver or what kind of confidentiality is included in the arbitration agreement.