The governor released her suggested budget and policy agenda for the 2021-23 biennium on Tuesday. 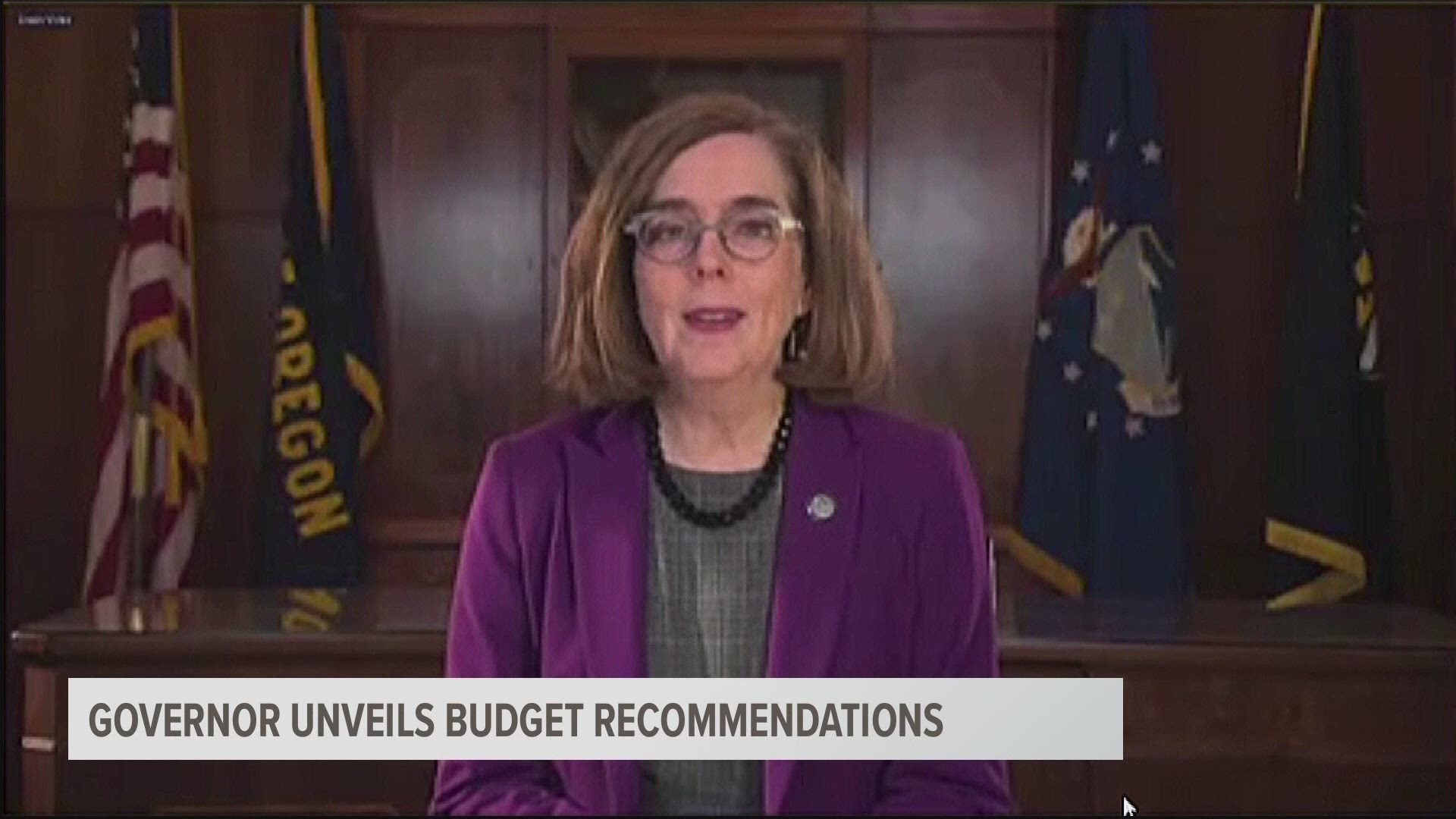 PORTLAND, Ore. — Oregon Gov. Kate Brown released her recommended budget and policy agenda for the 2021-23 biennium on Tuesday, and it invests heavily in state pandemic relief efforts while calling on the federal government to provide financial assistance.

In a press release, the governor’s office said a federal stimulus plan is “critical to addressing the dire needs Oregon and other states face due to the COVID-19 pandemic and wildfire recovery.”

The governor emphasized that point in a Tuesday news conference.

"I know Oregon will recover from these turbulent times but we can't do any of this alone... let me be very clear: this budget doesn’t put enough money into our schools, it doesn’t make the investment in public health that we need. It’s a budget built on sacrifice and hard choices," said Brown.

Brown’s budget for 2021-23 totals $100.2 billion in spending, including $25.6 billion in budget proposals that would come from Oregon's general and lottery funds.

“Thanks to prudent spending and healthy reserves, Oregon remains in a healthy position to meet future challenges,” the governor’s office said in a press release, noting that the budget includes more than $293 million in increased revenues and a surplus of $243 million in the General Fund.

Read a condensed budget summary and get more information at budget.oregon.gov.

The proposed budget for the 2021-23 biennium includes an increase of nearly $66 million in funding for housing and homelessness. In addition, Brown says she’ll ask Congress for $350 million in rent assistance.

And the budget also calls for $17.9 million in funds to invest in a range of strategies to help protect seniors living in assisted living and nursing homes from COVID-19.

On the state side, the budget maintains funding for the Oregon Worker Relief Fund, Oregon Worker Quarantine Fund, the COVID temporary paid leave program, and the Oregon Employment Department.

The governor’s office said the state faces a $718 million budget gap for the Oregon Health Plan, primarily because of the pandemic. Brown’s budget aims to help close the gap “through cost savings,” but also relies “an expected extension of enhanced Federal Medical Assistance Percentage (FMAP) funding.”

The governor’s budget directs $9.1 billion to the state school fund, which includes full funding for Student Success Act programs and initiatives and grants for schools under the High School Graduation and College and Career Readiness Fund. The budget draws $215 million from the Education Stability Fund for public schools.

Brown directs $189.5 million to rebuild communities impacted by the wildfires. Another $170 million of community development resources will be made available to the Governor’s Wildfire Economic Recovery Council. It also includes $73.7 million in fire preparedness, response and prevention.

The governor’s budget includes $118 million for broadband expansion across the state, which “will connect an additional 50 urban and rural communities that currently lack access.”

The governor’s policy agenda, which was also released Tuesday, focuses on steps to end systemic racism and racial disparities in Oregon.

“We must ensure the future is a just one,” Brown said. “That we create an Oregon where everyone has the opportunity to thrive. Where every voice is heard.”

Here’s a look at some of Brown’s proposed policies:

Brown’s office said climate change, wildfires, water quality and access disproportionately impact minority communities. To address this, Brown’s budget will invest in the creation of an Office of Environmental Justice and will also invest in “greenhouse gas reduction programs, and equitable water access, and wildfire preparedness, response, and prevention.”

The governor’s office said in a release that the events of 2020 have magnified the urgency of the need for reform of the criminal justice system. The proposed budget and policy agenda calls for expanding police accountability measures, reforming the state’s courts and stabilizing the budget for the Department of Corrections.

Brown’s budget calls for investments to “strengthen the core functions of our democracy” through the expansion of voting access and institutionalizing the governor’s Racial Justice Council. The Racial Justice Council was convened in 2020, bringing together leaders from the state’s minority communities to “develop specific investments and policy proposals to begin to dismantle systemic racism in Oregon."