"It's a very tricky business in the best of times, so when it's like this it's almost impossible," said Renata owner and chef Sandra Arnerich. 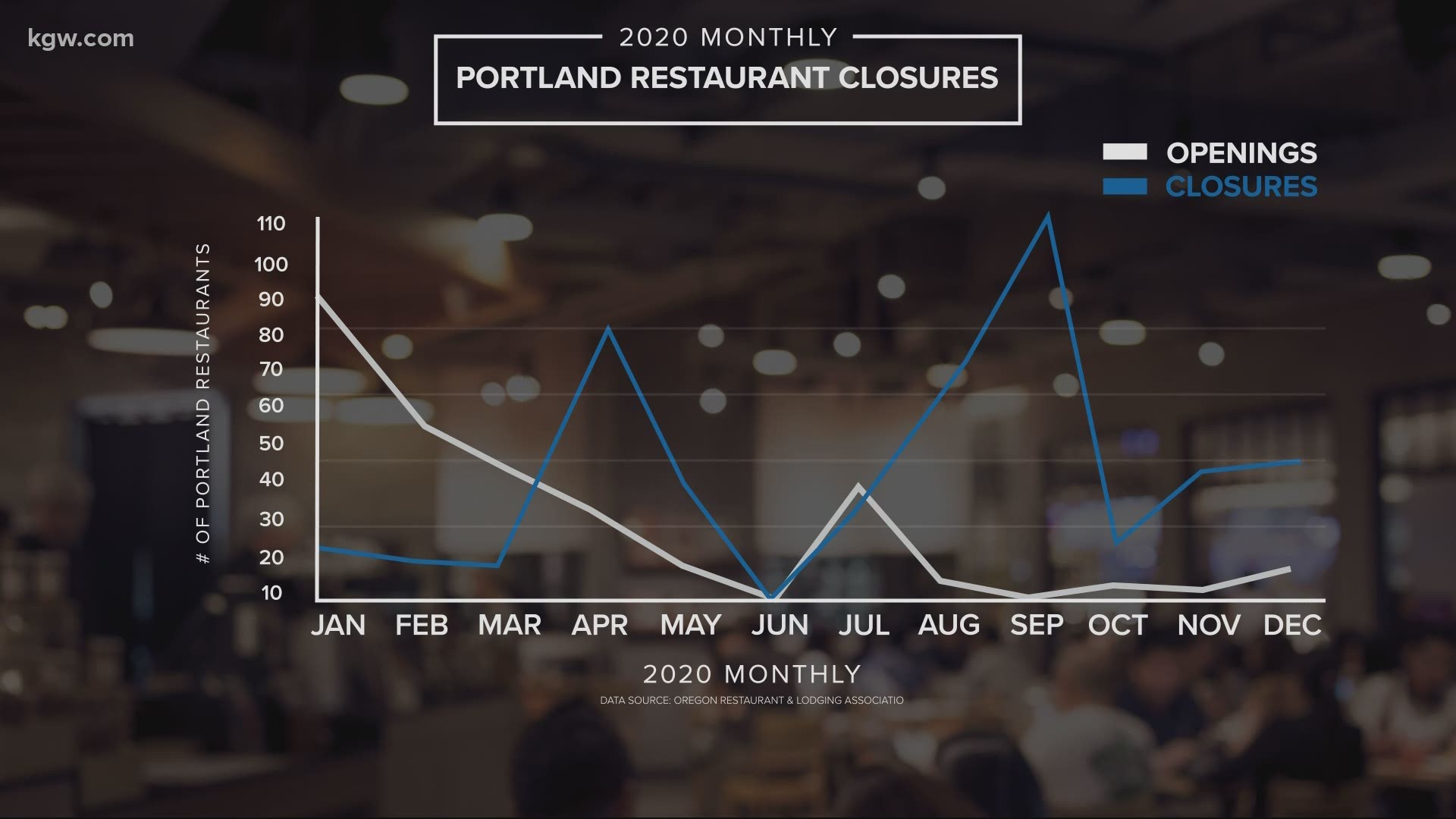 Already in 2021, ORLA says almost 90 restaurants have shut their doors.

A city famed for its flavorful scene has drawn foodies from near and far in recent years. But today, the scene looks starkly different.

"There are people who have to lose their entire business and their dream and everything they worked hard for," said Renata owner/chef Sandra Arnerich.

"We were a thriving business. All of downtown was a thriving place to be, that's where you wanted to be — until COVID hit," said Vitaly Paley, owner/chef of Paley's Place.

Award-winning chef Vitaly Paley and his wife Kimberly closed four of their five renowned Portland restaurants. Four were inside hotels in Downtown Portland, including Imperial, Crown, Rosa Rosa and Headwaters.

"It just made no sense to stay open," Vitaly said.

"It was a huge heartbreaking thing," Kimberly added.

The frequently changing COVID-19 restrictions for restaurants have added to the challenge.

"That's the hardest part is the uncertainty and not knowing," said Normandie general manager/co-owner Amanda Winquist.

When Oregon Gov. Kate Brown ordered a shutdown in March, restaurants shifted to take out and delivery. A few months later, in June, the state allowed Portland restaurants to seat a limited number of people until a certain time.

Owners re-hired staff and many updated their HVAC systems or invested in air purifiers and plexiglass.

"When we did do indoor dining this summer we left the windows open and put in a filtration system and we felt safe and comfortable about that," Winquist said.

"We were 'sustainable' and I say sustainable in air quotes because we were just kind of breaking even," said Ned Ludd owner/chef Jason French.

As weather worsened, others opted out, including Renata.

"Putting all those resources into making outdoor dining feasible and comfortable for people didn't make sense because the volume was not going to be there to support having staff on and the build-out and all that," Arnerich said.

November brought dreary weather and another shutdown as the pandemic worsened. Restaurants were pushed back to takeout and delivery only.

Owners had brought back staff to handle indoor and outdoor dining, as well as takeout. This time, most were forced to lay off almost all their staff again.

"We're dealing with perishables," Arnerich said. "It's a very tricky business in the best of times, so when it's like this it's almost impossible."

In early December, state leaders allowed people to eat outside at restaurants again.

"This is precisely why we decided not to play yo-yo with our restaurant, open and close, open and close," Paley said. "We picked a path and that path is: stick to takeaway until it's allowed and safe enough for us to open the restaurant."

Today, hair and nail salons are open with restrictions and a few people can work out in a gym. But you can't eat inside Portland restaurants.

Many restaurant owners are frustrated and disappointed they don't have the option to open indoor dining with safety measures in place at this point.

Other restaurant owners feel it's the right move, saying we are still in the middle of a pandemic and sitting inside with other people maskless while eating and drinking may not be the safest activity to do right now.

Those still open had to pivot, get creative and innovate.

Renata, on Portland's east side, did a 180: from fine dining to frozen pizzas.

"When times are this tough you have to be creative," Arnerich said.

About a mile away, Normandie took a month off to give staff a breather and started outdoor dining again this week.

Further north, Ned Ludd's future is up in the air because to-go didn't work out well for them. However, French is hopeful after receiving a second round of PPP money.

"I cannot produce enough revenue to pay rent, bills and staffing with the current restrictions as we have them," French told KGW.

The Paleys are focusing now on perfecting their popular to-go menus at their original restaurant, Paley's Place in Northwest Portland. They are optimistic Portland will one day regain its reputation as a popular destination for foodies.

"Restaurant people are a scrappy bunch," Vitaly said. "We will make it work. I promise you."