Portland shops open up for business again - or not

Just because they can reopen doesn’t mean all shops did. NW 23rd Avenue slowly began buzzing back to life but while several stores were open again, several were not. 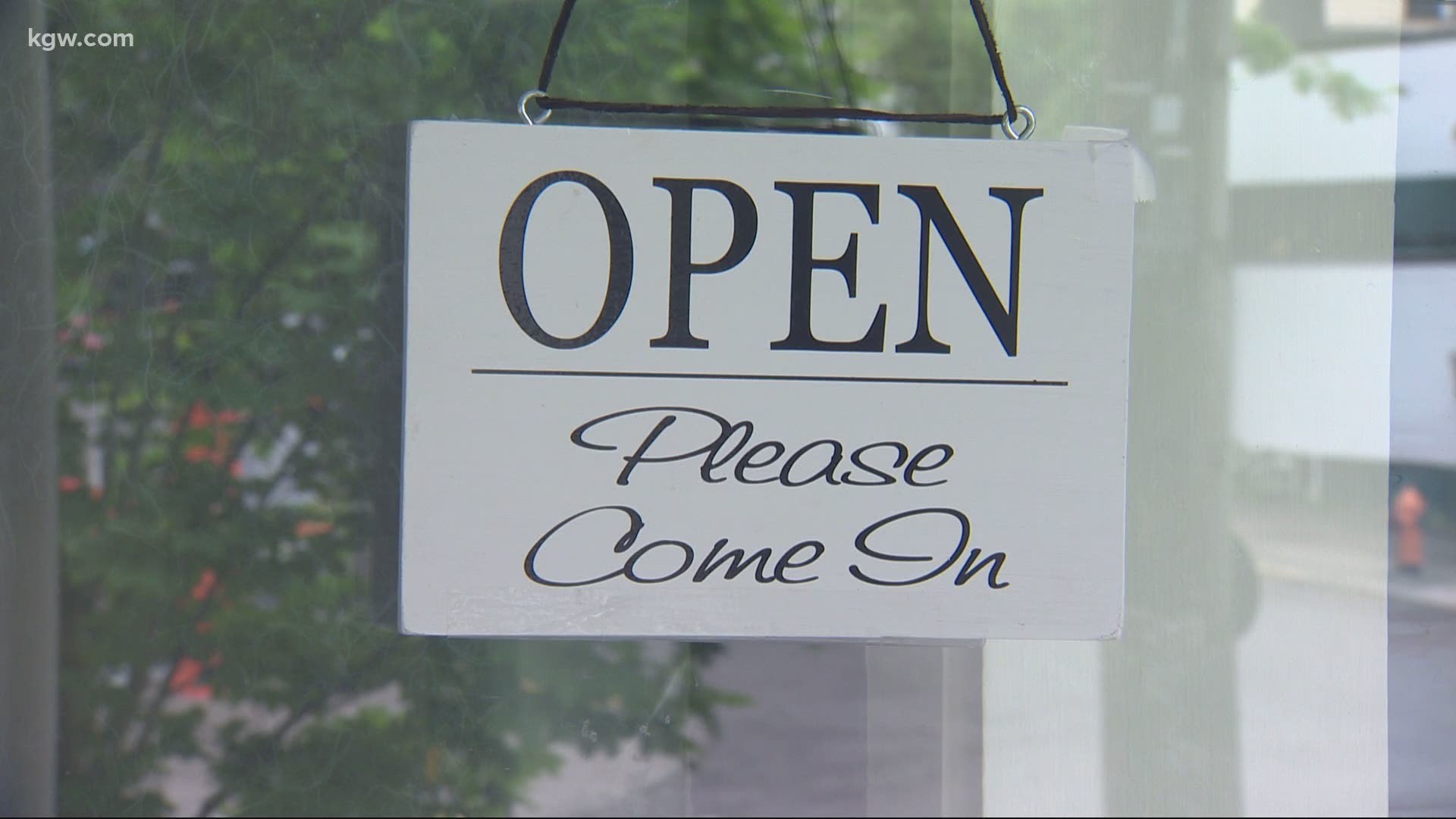 PORTLAND, Ore — Although the Portland metro area hasn't started reopening yet, some stores have.

Under Gov. Kate Brown's reopening plan, most retailers everywhere in the state could open up shop starting Friday for the first time in two months.

After almost two months, standalone shops like boutiques, galleries, furniture and jewelry stores could reopen Friday - even if the county they're in hasn't entered the first phase of reopening, like Multnomah County.

Just to clarify: all other standalone shops like toy stores and book stores were never technically ordered to close, though most did. That means all Oregon retail stores can open to shoppers again as long as they're not in an indoor or outdoor shopping center and follow state guidelines.

But are they opening? We hit two parts of Portland typically buzzing with crowds to find out.

What we discovered was a pretty big difference between NW 23rd Avenue and SE Division Street Saturday afternoon.

RELATED: Here are the guidelines for retail stores reopening in Oregon

Just because they can reopen, doesn’t mean all shops did. NW 23rd Avenue slowly began buzzing back to life but while several stores were open for business again, several were not.

“Definitely more people out here today than there have been,” Oh Baby Lingerie owner Laura Fitzpatrick said. “I think I'll see some people today and tomorrow. Short days but it's something.”

Fitzpatrick got some business by taking appointments again and opening up for foot traffic.

“Because we could! And I think people were ready. I'm ready! Just to have a little bit more life - with precautions and changes we've had to make,” Fitzpatrick said.

She rearranged the store to allow for six feet of distance between customers and asks that everyone wear masks. Retailers have to follow requirements to keep workers and customers safe, including limit the number of people inside and post signs about social distancing and COVID-19 prevention.

Down the street, a small gallery and gift shop chose to open their doors too.

Like Nobody's Business owners Steve and Constance Williams figured, ‘why not?’ They don’t have to employ anyone but themselves and they would rather be at the store than sit at home.

At 2 p.m. Saturday, they’d only seen one customer so far. A pre-retirement endeavor, the Williams say that's OK. They don't expect a rush, especially because out of towners account for so much business on NW 23rd.

"Our goal is to break even,” Steve Wililams said. "Our traffic is about 80% tourist and nobody is getting on an airplane. We're relying on locals right now.”

Business owners near NW 23rd and Lovejoy told KGW at least one of their neighbors plans to close for good and they’ve seen more “For Lease” signs than ever before.

Across town, on a normally popping street for locals and visitors, the vibe matched the dreary weather Saturday morning. A lot of shops up and down a long stretch SE Division Street chose not to flip the switch.

One small business, Citizen Ruth, told KGW they decided to open up to get their employees back to work before their Paycheck Protection Program (PPP) loan ran out. Citizen Ruth is open for business again with limited hours Thursday through Sunday and is only allowing two customers in at once and requiring face coverings.

It's all a little confusing in places that haven't started reopening yet.

Counties have to meet seven prerequisites. Multnomah county has met many of those, like a decline in hospitalizations and hospital capacity, for example. But they still have work to do to hire contact tracers and make testing more accessible to underserved communities.

Currently, 31 counties across the state are beginning to ease stay at home restrictions. Marion and Polk counties had their requests to enter phase one denied because state leaders say there's been a rise in COVID-19 cases and hospitalizations there.

The Portland metro area is at least a few weeks away from Phase 1; Multnomah, Washington and Clackamas counties haven't even applied to reopen yet.

While Multnomah County officials say we're still weeks away from applying to reopen, the needle moved slightly toward normal in Northwest Portland this weekend.

"Until we can find that balance I think it’s going to be hard for people to open up completely,” Fitzpatrick said.

RELATED: Oregon coronavirus updates May 16: No new deaths reported for the second day in a row

RELATED: Here’s how day one of reopening went in Astoria and Seaside