PORTLAND, Ore. – The city of Portland is launching a full investigation into the ride-sharing company Uber after a New York Times report described how Uber used a tool called 'Greyball' to evade Portland authorities. 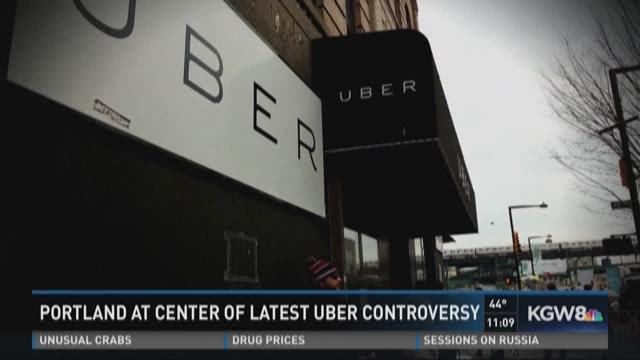 PORTLAND, Ore. – The city of Portland is launching a full investigation into the ride-sharing company Uber after a New York Times report described how Uber used a tool called 'Greyball' to evade Portland authorities.

"This whole concept of the Greyball app throws a curveball into an already tense relationship," Wheeler said.

The mayor said Uber may have violated city code, state law, and "perhaps more than that" when it used the Greyball app to avoid picking up city code enforcement officers when Uber was illegally operating in Portland.

He also said the company may not be "bestowed with ethics," and questioned Uber's lobbying effort for HB 3264, which would remove the city's ability to regulate ride-sharing companies in the same way.

Wheeler said he will use all of the tools available at the city to find out what laws Uber violated. He said the Department of Justice may also join in the investigation.

"I'm appalled that a major company like Uber would instruct its employees to deliberately engage in developing such a software app," he said.

The investigation will also include Lyft, which has a similar operating model. There have not been reports that Lyft used evasive tactics similar to the Greyball tool.

KGW has reached out to Uber for a response.

The ride-hailing service Uber is now ubiquitous throughout the city of Portland, but back in 2014 it was operating illegally and somehow skirting city officials trying to crack down on the company.

The New York Times reports that Uber used a tool called “Greyball” to evade authorities in a story published Friday.

The story collected employee reports, documents and an interview with a Portland code enforcement inspector to show that Uber used Greyball to single out riders who were likely officials trying to catch Uber drivers.

Code enforcement inspectors like Erich England tried to use Uber and catch them red-handed, but somehow Uber drivers never picked him up.

From the New York Times report:

To build a case against the company, officers like Mr. England posed as riders, opening the Uber app to hail a car and watching as miniature vehicles on the screen made their way toward the potential fares.

But unknown to Mr. England and other authorities, some of the digital cars they saw in the app did not represent actual vehicles. And the Uber drivers they were able to hail also quickly canceled. That was because Uber had tagged Mr. England and his colleagues — essentially Greyballing them as city officials — based on data collected from the app and in other ways. The company then served up a fake version of the app populated with ghost cars, to evade capture.

Uber told the newspaper Greyball denies ride requests for people who are violating the company’s terms of service for a multitude of reasons, including enforcement stings.

Portland isn’t the only city where Greyball was used. Boston, Paris and Las Vegas drivers also avoided capture through the Greyball program. It was also used worldwide in Australia, China, Italy and South Korea.

Uber operated illegally in Portland for two weeks before it agreed to temporarily halt service. Uber launched with city approval in April 2015.

The New York Times reports Uber used Greyball in Portland at least into 2015.

PBOT Director Leah Treat said Portland was unaware of the Greyball app, but the city did know that Uber tried to avoid regulatory officers when it was operating illegally.

Once Uber agreed to pause in late 2014, the city began to pave the way for the company to operate in city limits, directly competing with taxis. Then-mayor Charlie Hales and Commissioner Steve Novick had a secret meeting with an Uber lobbyist that both Hales and Novick failed to report the meeting on their calendars. Uber was fined and both Hales and Novick were issued written warnings.