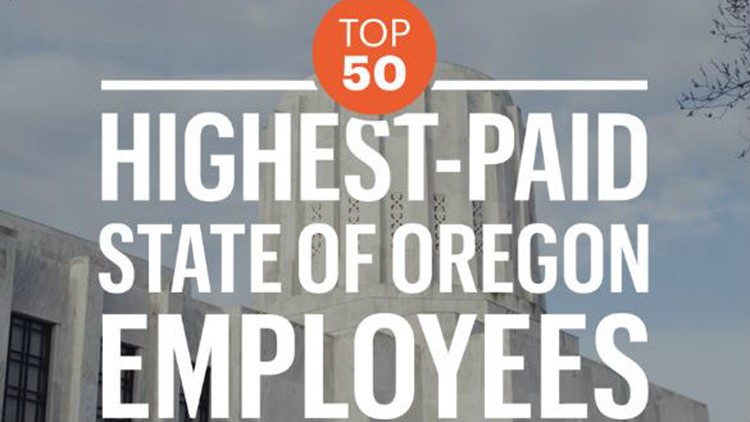 These are Oregon's 50 highest-paid state employees

PORTLAND, Ore. — While some government jobs pay well, none match the heights of executive pay in the private sector.

And the most prominent executive positions in Oregon state government are not the most lucrative. Governor Kate Brown's salary is only $98,600. Attorney General Ellen Rosenblum receives $82,200. Secretary of State Beverly Clarno gets $77,000. Labor Commissioner Valerie Hoyle earns $76,992 and the official in charge of all the money, State Treasurer Tobias Read, is only paid $72,000.

Nevertheless, the top 10 highest-paid employees are led by Read in the Oregon State Treasury, which employs 12 of the top 50. They are primarily investment officers specializing in various markets and instruments to invest and manage the state's taxpayer funds to, hopefully, yield maximum returns. Such skills are coveted by the private sector, so the state is willing to pay more to attract talent. The agency is relatively small, though. Despite its high-flying salaries, it only accounts for 3 percent of all six-figure salaries in the executive branch.

The next highest-paid echelon of state workers are medical professionals in the Department of Corrections, accounting for 14 of the top 50 highest-paid employees and the agency's six-figure salaries make up 7.7 percent of the state's executive total.

Next up is the Oregon Health Authority, which employs 25 of the top 50 highest-paid workers and 18.6 percent of all six-figure salaries in the state. Obviously, doctors and other medical experts are other highly prized occupations that the government must pay more to retain.

Only two other agencies are represented in the top 50: the Oregon Medical Board and the Oregon Youth Authority.

MORE: PDX soars in satisfaction rankings while others remain grounded