The storm sent thousands of dollars worth of food and prep work down the drain. 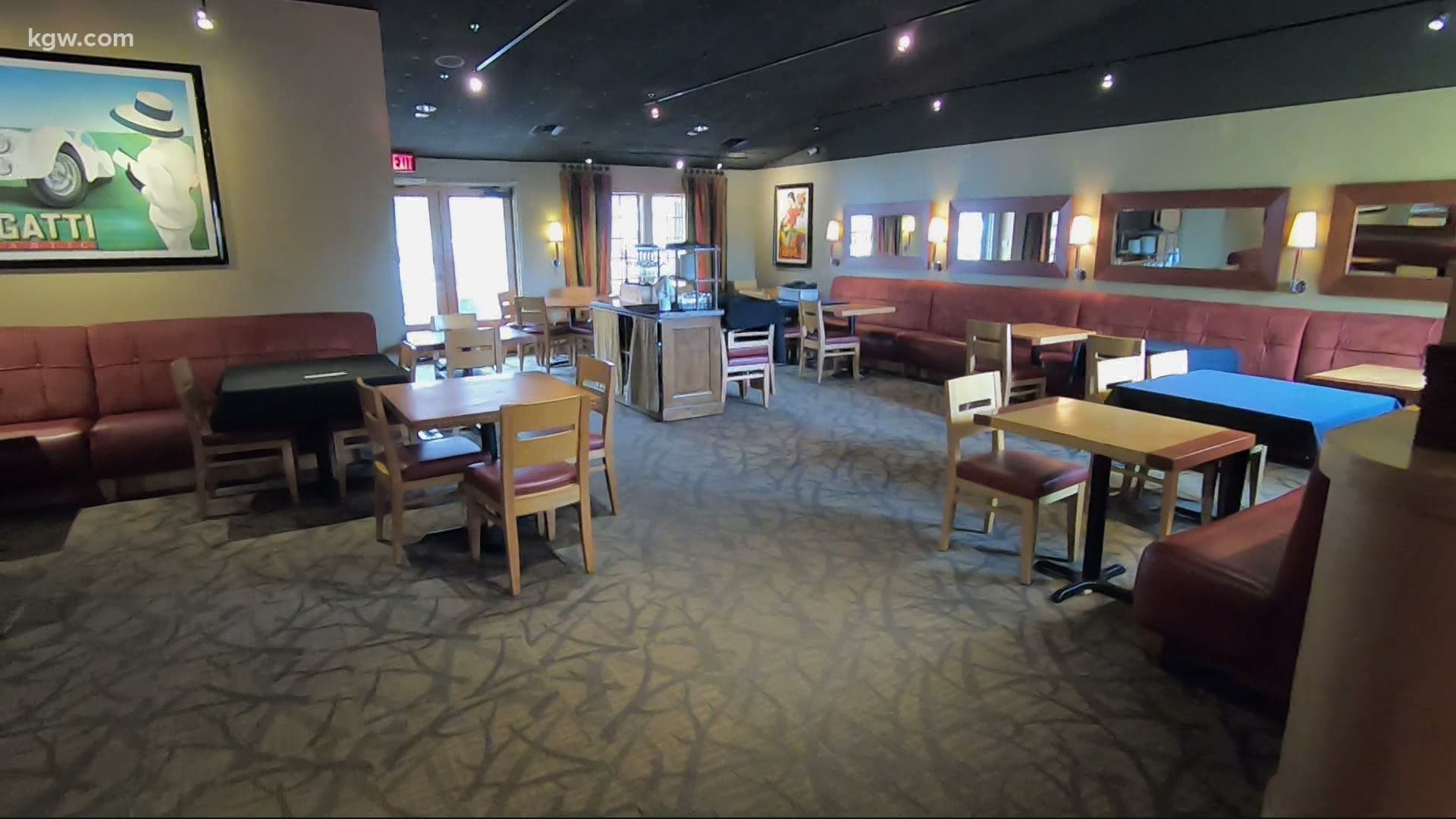 CLACKAMAS COUNTY, Ore. — Add this weekend's storm to the list of blows restaurants have faced in the past year. Many in the Portland metro area were finally about to reopen for indoor dining when the ice and snow hit. Clackamas County is just one spot where many restaurants lost power all weekend, causing them to lose thousands of dollars.

As the lights slowly switch on along Oregon City's Main Street, the cleanup begins. It's the same scene downriver in West Linn.

"West Linn just got pummeled," said Bugatti's Ristorante general manager Michael Whitmore. "All their trees came down, knocking down everybody's lines. No one had electricity, including us."

"We've been dying for sales and revenue and also to see people - we haven't seen people in so long. We did make the decision to go ahead and amp up for a busy Valentine's Day weekend," Whitmore added.

When the governor announced metro area restaurants could reopen for limited indoor dining last week places scrambled to hire back staff and buy and prep food. Bugatti's lost everything when the storm hit.

"We lost a lot of our product," Whitmore said. "So, this weekend killed us. Something that was supposed to be very lucrative; we ended up losing probably tens of thousands of dollars between product and sales."

After only doing takeout, Mi Famiglia Pizzeria in Oregon City also lost upwards of $10,000 worth of food and prep work. They were excited to start indoor dining again on Friday, as they'd been struggling over the last few months.

"For us, financially, it was pretty devastating," Mi Famiglia owner Kyle Bradfield said.

"It's disheartening for sure," owner and chef Yvette Kirwin said. "It's one step forward and 15 back."

The storm sent thousands of dollars worth of food and prep work down the drain for Nebbiolo, too.

"We lost everything: eight refrigeration units of product lost," Kirwin told KGW. "Just to sustain, we’re not making it. So, I’m super excited to have the few tables I do inside to help us start to make some money again. And then this happens."

Outdoor dining and takeout haven't been cutting it this winter.

"You lose hope," Kirwin said. "It's super sad. Then, you get that glimmer of hope and you're like, 'OK, this is what I am going to do,' then you kind of feel like you're getting crushed again," Kirwin said.

These restaurant owners and managers really feel for their staff as well. They've had to lay them off and re-hire them multiple times now.

"This whole year is a wash," Whitmore said. "Not just for us, for everybody. It's more about the people, we miss the people."

Once the storm passed they all had to start over, dropping thousands of dollars again.

"Not only do we have to junk and restart all the food but the labor involved in processing all the food is also part of that expense," Bradfield said/, "It was a substantial investment to reopen then reopen again."

But as the lights slowly switch back on in Clackamas County, restaurants hope it signifies light at the end of the tunnel for them.

"We’ve always been able to rally and come back and the community takes good care of us," Bradfield said. "We’re optimistic, especially now that weather is looking pretty good and we’re open for dining."

"You just roll with the punches," Whitmore said. "We're very, very grateful we're still standing. And we will keep going."

They all got their power restored within the last three days. Bugatti's finally reopened indoor dining Tuesday, Mi Famiglia reopened Wednesday and Nebbiolo will start indoor and outdoor dining Thursday.