A man moving to Bend from Alaska lost $6,000 and his possessions after he contracted with Ability Moving, an unlicensed company with an F rating by the Better Business Bureau. 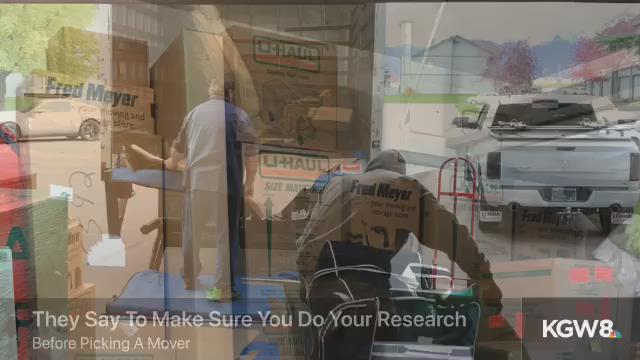 Moving season is around the corner and the Better Business Bureau is warning people about scams in the moving industry.

“I don't remember if I looked at the ratings,” said Renee Meiffren, who just moved into her new home in Northeast Portland.

Meiffren got lucky. A friend recommended Portland Movers. They have an A+ rating from the Better Business Bureau.

“I know I can trust these guys to put their care into what they are doing, to do a good a job, and do it quick," she said.

A family in Bend wasn't so lucky. They used Ability Moving during their move from Alaska in October and never got any of their stuff.

“We had to buy a new crib, a new stroller, and clothes, and now he's outgrown half the stuff they had,” said Daniel Pena about his 1-year-old.

Pena says he paid Ability Moving $6,000 upfront. He hasn't gotten any money back and doesn't think they will ever pay up.

“I don't think they will. They won't even answer a phone call,” Pena said.

The Better Business Bureau Northwest revoked the company's accreditation and gave it an F rating. According to the U.S. Department of Transportation, the company is not even licensed.

“I did some research before choosing a moving company. They didn't have horrible reviews at the time," Pena said. "I guess what I learned is to check online and do more research.”

The BBB says they received 100 complaints about moving companies in the past year. They recommend doing some research on their website before choosing one for your next move.

“These are people's valuables, they are counting on them to be there," Meiffren said. "They paid up front; it's just bad business."

KGW called Ability Moving for comment. We got a message saying the number is no longer in service and there is no new number.