Portland Bureau of Transportation's Healthy Business Program is helping bring businesses back to life - but not everywhere in town. 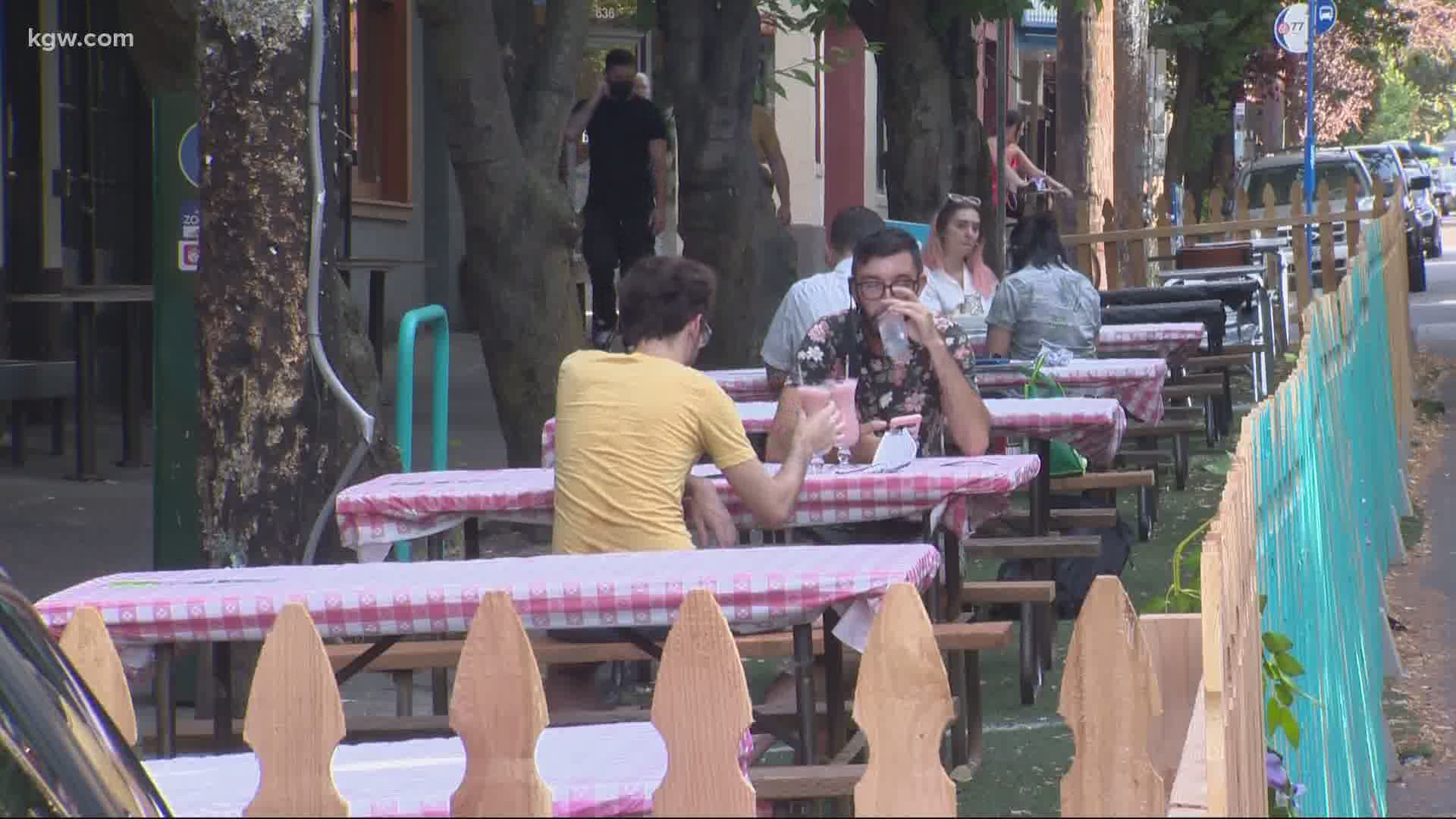 PORTLAND, Oregon — Restaurants and bars in Portland took huge blows when Multnomah County shut down to help slow the spread of the coronavirus.

A new Portland Bureau of Transportation (PBOT) program is helping bring businesses back to life - but not everywhere in town.

On a hot summer Thursday night in Northwest Portland, life almost resembled what it once was.

"You know what I really enjoy is the chance to have a glass of wine with some friends outside where I feel at least relatively safe,” Janet Smith, who lives in Northwest Portland, said, “and in this time when we don't get to do much.”

“It definitely is allowing us to keep people employed. We retained 90-plus percent of our staff,” Burby said.

Permits to put tables on sidewalks normally cost hundreds of dollars, but during the pandemic they became free for businesses. PBOT launched the Healthy Business Program in response to the economic impacts the global health crisis is having on restaurants and bars in Portland.

It has issued about 700 permits city-wide, but only seven of those applicants are east of Southeast 82nd Avenue.

"I don't think I would say it’s the only reason we're open but it’s incredibly helpful and has created a couple new jobs and some more shifts for people and as we expand we’re hoping to see that continue to grow,” Zoiglhaus Brewing Company General Manager Andrea Kelsey told KGW.

Zoiglhaus on Southeast 92nd Avenue is one of the few businesses with a permit that far east.

“We're just kind of on the outskirts,” Kelsey added, “Something we're working on is becoming more of a destination area.”

PBOT spokesperson Dylan Rivera says places that didn't apply for permits either didn't need them because they have parking lots or enough outdoor seating, or the program wasn't a good fit.

In East Portland a lot of spots sit on busy, wide roads with no where safe or enjoyable to put people, which is the case for Refuge Coffee House on Southeast Foster.

"That parking space is right next to that busy road,” Refuge Coffee House Manager Keith Richardson said. “When it comes to a program like that… I don't see how it could apply to our situation without it being trafficked heavily and without putting pedestrians and customers sitting down at a table in a bad spot.”

Richardson told us it would be nice to have but he’s not sure if it would help boost business, particularly because they chose to be in that location to catch commuters.

Rivera told KGW some places are having trouble paying for outdoor expansions but it is working on partnerships to make that a little easier.

The transportation bureau is also trying to reach businesses owned by people of color by offering some free temporary cones, paint from miller paint and design help.

Portlanders we spoke with felt for those restaurants unable to make it work, since most people choosing to venture out at this time feel safer spending even a hot summer night outside versus inside any restaurant.

“It’s getting people outside into restaurants,” Joyce Beasley, who lives in Northwest Portland, said, “We don't want to see any more restaurants not be able to open again.”

RELATED: 'If I go back I think I probably will close my doors': Portland restaurant owners worried about potential Phase 1 rollback