20-year-old Brennan Agranoff started custom sock HoopSwagg company in 2013. Thanks to special glasses, he saw his colorful work in a new light for the first time. 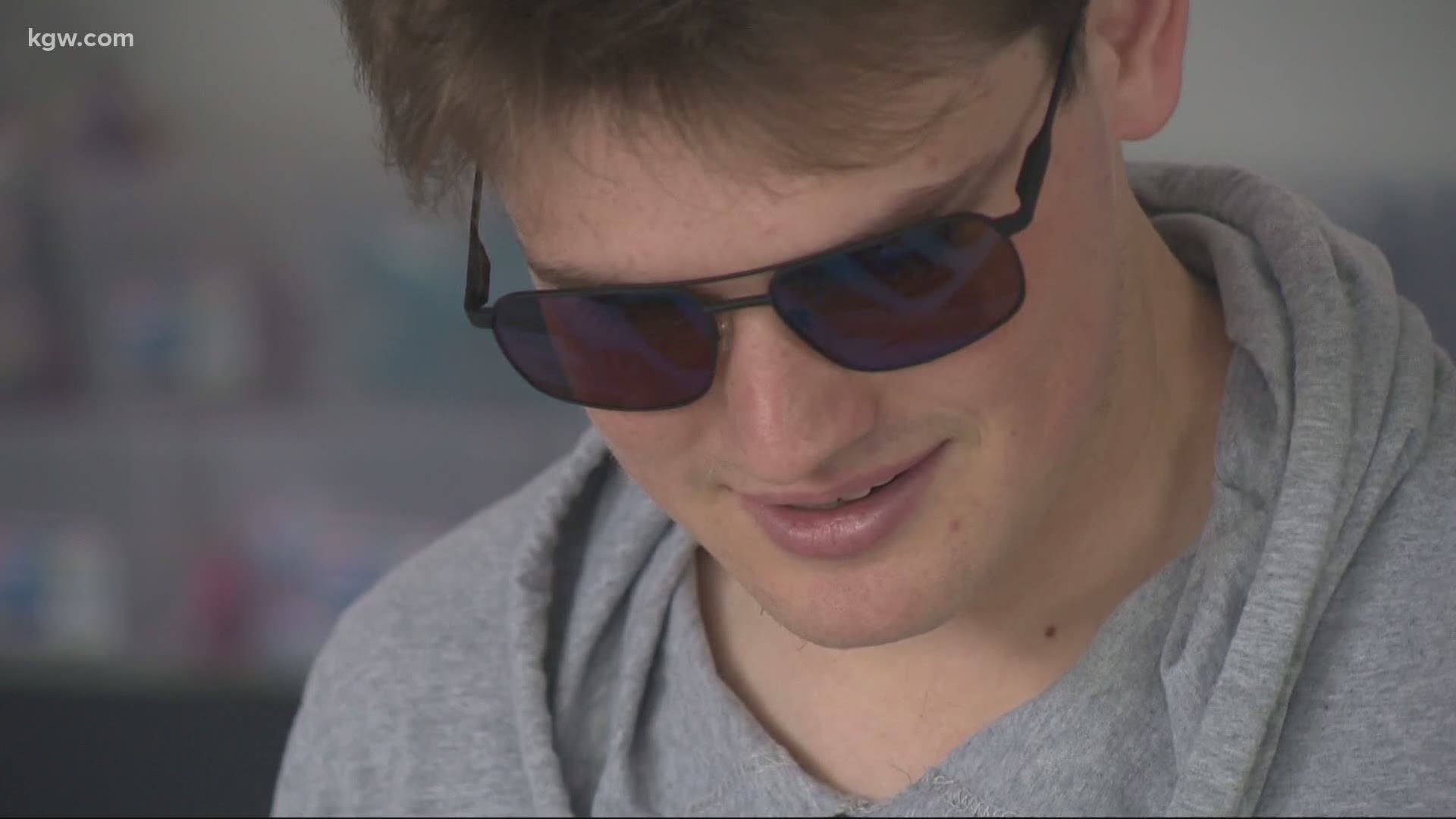 SHERWOOD, Ore. — There’s quite a bit of noise at the Agranoff home in Sherwood.

"When you’re driving up, anything to the left of the driveway is ours," said Brennan Agranoff. The goats greet you along the fence and they have a chicken compound behind the house, but 20-year-old Brennan has perhaps the loudest operation around here.

In 2013 Brennan founded HoopSwagg, a sock company that is as much in your face as it is on your feet. When he started the business at age 13, he threw some sample pairs up for sale online.

"They did really well… and after that I got my own equipment setup and saw what I could create after that."

Hoopswagg offers over 700 different designs, with over $2 million in sales last year.

"I had no idea that starting a sock company at 13 would open so many doors but it’s been cool in all aspects of life. Anything from meeting people, and sort of opening my horizons," Brennan said.

Thanks to the business, he’s traveled the globe and done a lot, but he’s never truly seen the full spectrum of his creations.

"When I was like five or six years old, we figured out that I was colorblind and for me I get a lot of greens and reds mixed up, and oranges and yellows and really similar shades," he said. "I see colors, I just don’t know what’s what necessarily."

Brennan creates all the designs, and has others help with a color check. "I've put some weird combinations of colors together that I don't think a normal vision person would have, that have ended up being some of our best sellers. So it's good and bad."

He’s learned to identify colors, but has never really experienced them, until now.

"This company Enchroma basically reached out and sent me these colorblind glasses that will supposedly allow me to see with normal color vision… and so I get to put them on for the first time and see what all my stuff looks like, so I’m super excited," said Brennan.

Brennan’s brother Brady, who’s also colorblind, tried on a pair too. It took about 15 minutes for them to notice a difference. What they saw — knocked their socks off.

"The flowers, or our goats. I could see our goats are dirty. They just looked like white before, there’s brown all over them," Brennan said.

Now he’ll get to work using his new understanding of color in his Hoopswagg creations.

"I'm super excited to make something with these and see how much different it is comparative to how I would normally do the colors," he said. "I almost want to do one with the glasses, one without and see what I come up with."

RELATED: Portland clinic challenges other companies to donate to DHVANI’s ‘A Mask for Every American’ campaign