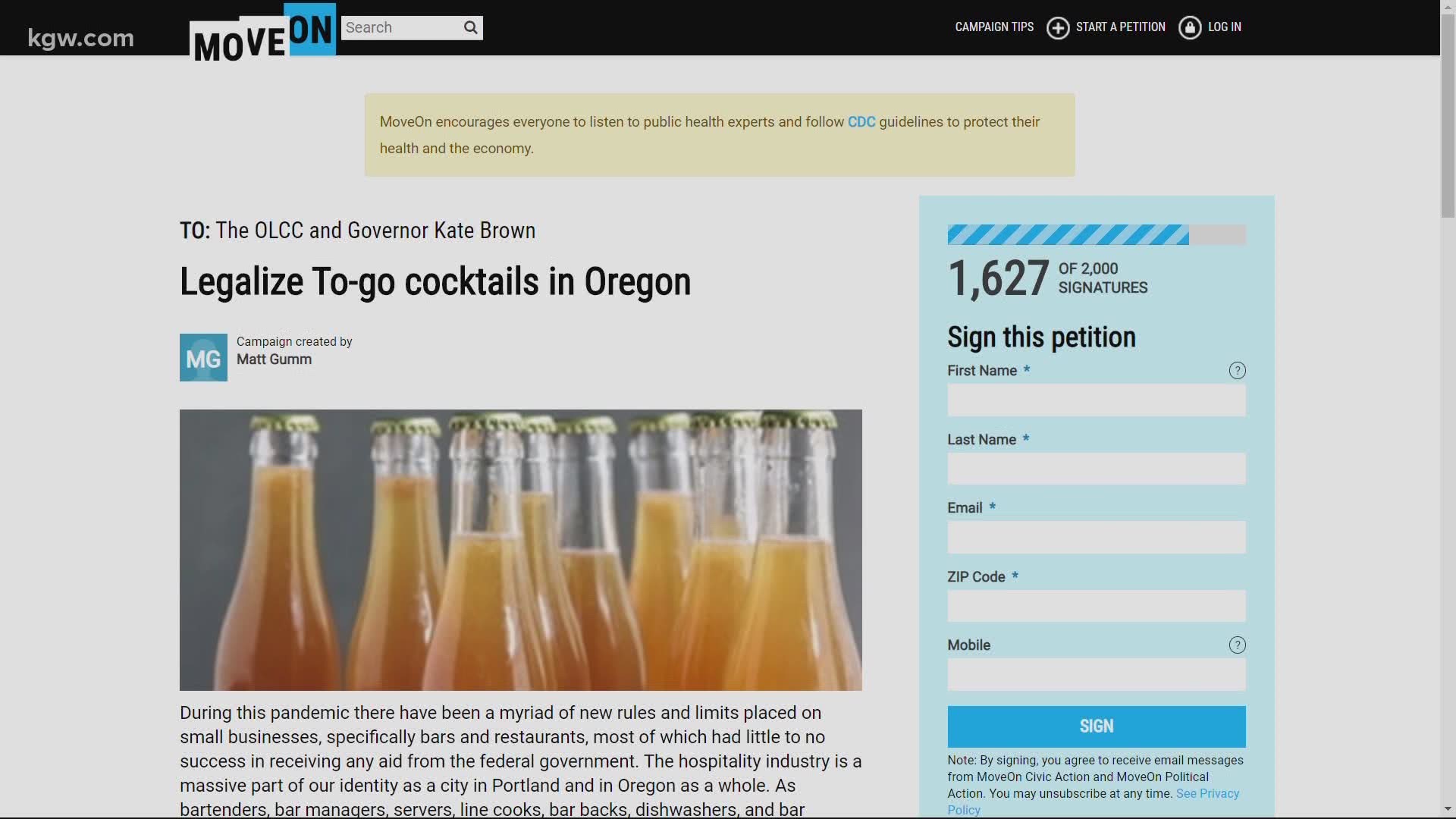 PORTLAND, Ore. — Before the pandemic hit, you could feel the pulse of Portland in its bar and restaurant scene. From birthdays and anniversaries to a happy hour after a hard day of work, craft cocktails and unique boozy beverages were often at the center of it all.

"Money is just coming out of the account, nothing's going in," Portland bartender Micah Anderson said.

Anderson is a bartender at the Rum Club in Portland. His job is waiting for him when the bar is able to reopen, but right now he says they can't because of Phase 1 restrictions.

"We're still closed. What that means for us is that we're not bringing in any revenue, we haven't gotten any concessions on rent. So, we're still paying full rent with no money coming in and that's the case for a lot of people," he said.

Matt Gumm is also a career bartender who is out of work because of the pandemic.

Worried about how the hospitality industry and its workers would survive, Gumm and Anderson came up with a solution: cocktails to-go.

The goal is to give bar owners and workers alike the opportunity to continue supporting themselves through increased sales.

"I just wanted to give us all of the tools available to survive as and industry during this time period and it might not make us filthy rich and give us all that we want, but it might help us keep the lights on and make sure people's paychecks aren't going to bounce and things like that," Gumm said.

Current laws do not allow for take-out and delivery of cocktails. Earlier on in the pandemic, the Oregon Liquor Control Commission (OLCC) eased regulations, allowing restaurants, bars and pubs to serve beer and wine to-go and for deliver. Mixed drinks and liquor, however, do not apply to those new rules.

Gumm and Anderson aims to change that with their petition. It demands the OLCC and Governor Kate Brown legalize to-go cocktails in the state.

Several other states have already given the green light for to-go cocktail sales, including Washington and California. Iowa recently made it a permanent law change.

Both Anderson and Gumm say many of the logistics need to be worked out and they want to ensure it's done safely, but they also want it done quickly.

"It's something that, I feel like, if we don't get done in this next special session, whenever it's called it's going to affect a lot of people," Anderson said.

As of  8:30 p.m. Sunday night, the petition to legalize to-go cocktails in Oregon had more than 1,600 signatures.

KGW reached out to the OLCC, but hadn't heard back.

RELATED: Cook at popular Portland food truck speaks about business during the pandemic