A two-hour long walking tour called “Pendleton Underground” can lead you back to a time when Eastern Oregon was booming, and small towns hid their secrets. 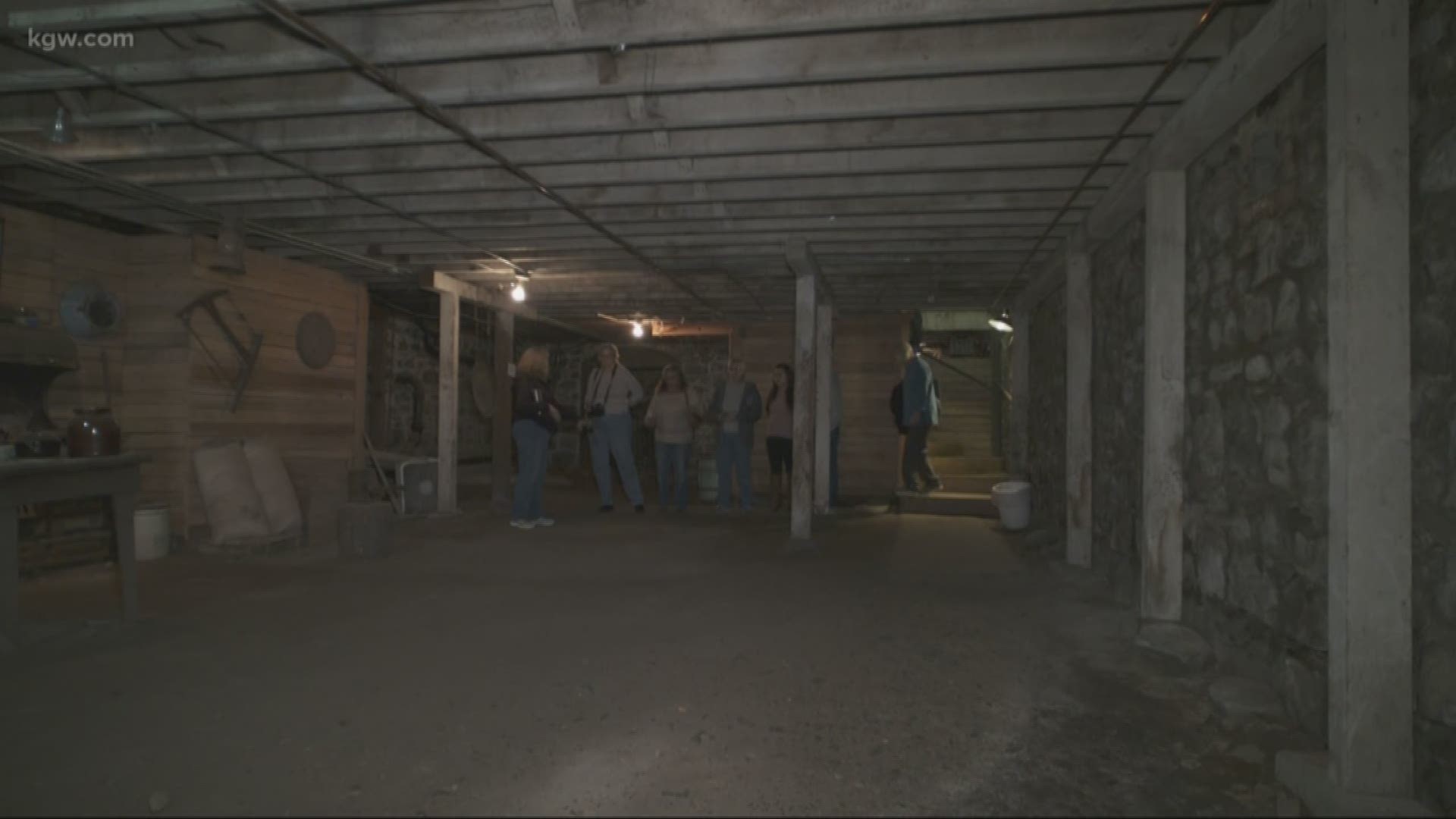 Iverson is a guide for the two-hour long walking tour called “Pendleton Underground,” and she can lead you back to a time when Eastern Oregon was booming, and small towns hid their secrets.

The tour begins in the historic downtown district and our small party of a dozen visitors descended stairs under the city streets and entered the Shamrock Card Room.

“This is basically the way it was – we try to keep everything as intact as possible,” noted Iverson.

The tour shows off a darker side of Pendleton. For example, in the card-room, Iverson says the bartender would cheat customers out of gold dust by spilling a little bit each time that he pinched some gold dust from a miner’s “poke” for a drink payment.

“If they weren’t serving drinks, they were cleaning the bar,” said Iverson. “Now, they didn’t do that to be neat and tidy but rather they swept up all the extra gold dust that didn’t quite make it to the scale – when no one was looking it was swept to the floor.”

The underground tunnels and rooms were dug out and built by hundreds of Chinese workers who arrived from China in 1860’s to build that transcontinental railroad.

The workers were discriminated against by the town's white population. So much so, the Chinese workers were not allowed on the streets during daylight hours.

“They were teased, taunted, shot and killed and the cowboy who did the shooting was fined five dollars,” said Iverson. “That was not for the killing, it was for discharging his weapon in the city limits. So, that’s how bad it was.”

For several decades around the turn of the 20th century, there were two towns in Pendleton: one above the soil line for all to see, and one below it known only to the chosen few.

“Pendleton has quite a vast tunnel system under the city,” added Iverson. “So, if you knew how to get down here, you knew where all the stairways were and all the exits and entrances, you could go almost anywhere underground.”

In addition to underground history, climb the stairs to reach the nearby Cozy Room. It was once one of 18 bordellos that made up the town’s red-light district in the late 1800’s. The second-floor hallway is full of the so-called working girl rooms that operated until the 1950’s.

The Cozy Room was run be Madam Stella, who was a well-liked woman in the community and had a reputation for treating her girls well.

Back at Pendleton Underground, be sure to check out the remarkable display of leather saddles and other leatherworks by famed local artist Duff Severe.

Brooke Armstrong, Pendleton Underground’s Executive Director, and relative to Duff Severe, said her great uncle apprenticed himself to the Hamley Saddle Company in Pendleton, Oregon in 1946

“He spent 10 years with that firm learning his trade, then went into business with his brother Bill, who also had worked at Hamley,” said Armstrong. “Bill learned to build saddle trees, and Duff specialized in making the saddle on the tree. Severe saddles have an international reputation; orders have come in from as far away as Australia.”

Over the years, Severe became renowned for his skill at braiding horsehair and rawhide. He also applied these skills to decorating bottles and creating jewelry, using the same basic knots found in horse gear.

“It is the artistry of Duff’s work that sets him apart it from every saddle maker in the world,” added Armstrong. ”He took it to a different level, a completely different level, from being art craft to a piece of art.”

Whether above ground or below, this fabulous Eastern Oregon destination is worth the time and travel.

In addition, be sure to check out  “Grant’s Getaways Guide to Wildlife Watching in Oregon.” you will enjoy 48 uniquely Oregon adventures highlighting my fish and wildlife encounters. scores of colorful photos by “Grant’s Getaways” photographer, Jeff Kastner, show off some of our finest moments in the field.  You can also learn more about many of my favorite Oregon adventures in: "Grant's Getaways: 101 Oregon Adventures."

You can reach Grant: gmcomie@kgw.com