Dan Schmalle, of Poulsbo, used a 1962 Honda Superhawk motorcycle he built to set a land speed record at the Bonneville Salt Flats. The record may only stand until next year, but for now, the bragging rights are all his. 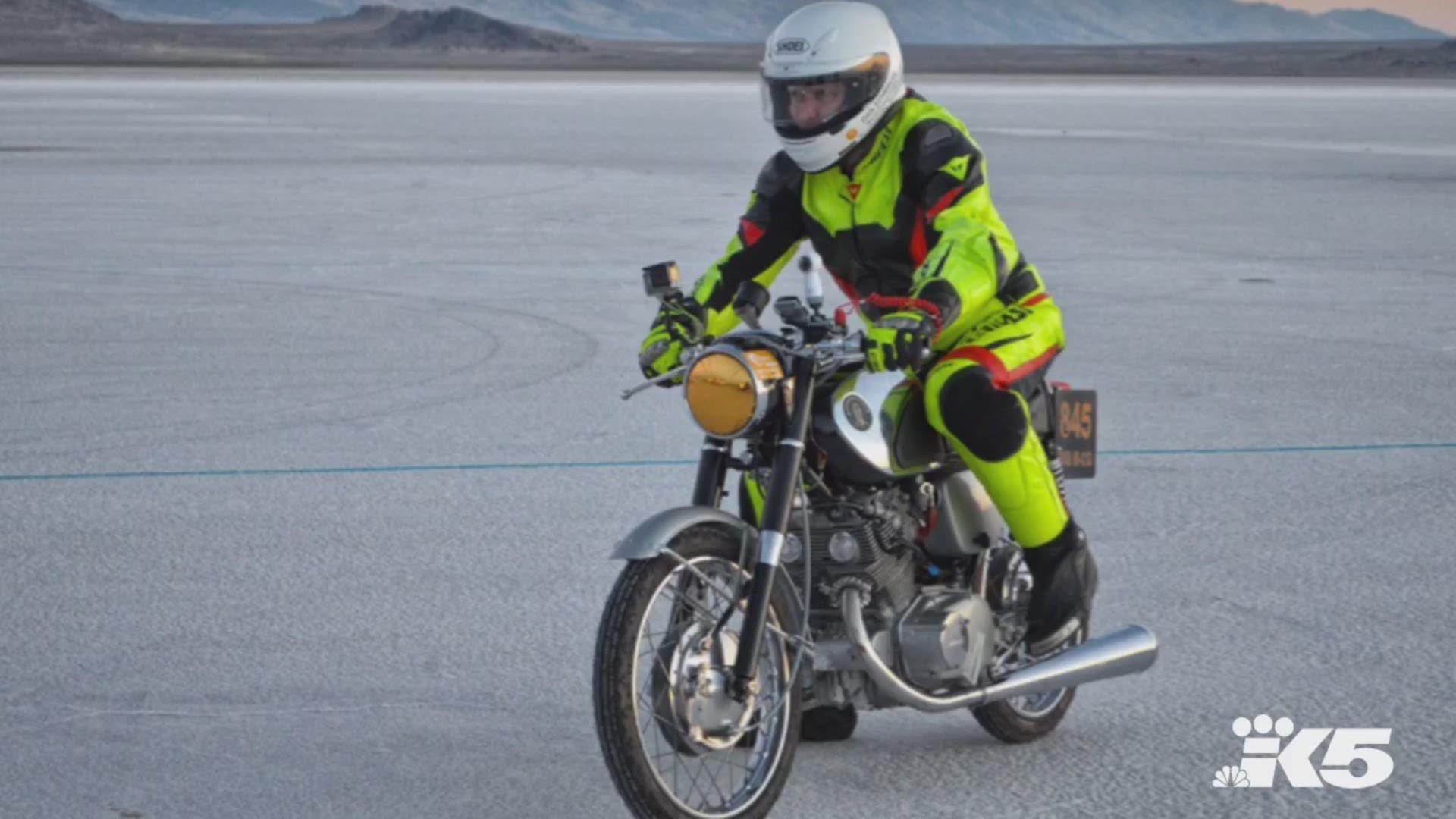 POULSBO – The white surface stretches out for miles – harsh, yet smooth – salty and absolutely perfect for speed. Off in the distance, the Silver Island Mountains poke at the Utah sky.

He sits on his 1962 Honda Superhawk, bundled up in safety gear, ready for the ride of his life. He’s given the OK, and he begins his ride out, throttling up the motorcycle he built in his basement, screaming in a release of pure joy.

“I was actually running a land speed race at Bonneville,” he says. This is a day he will not soon forget.

In a blur, he blazes across those famous salt flats and reaches the other end of the course. There are tears in his eyes when he finishes that first run. He’s checked an item off his bucket list.

The wind kicks up in the afternoon, and Dan isn’t able to complete the second run that same day necessary to secure a record. So he comes back the next day – now a hardcore racer, he says – determined to get his two runs done, his eyes on a land speed record.

Dan had always had a DIY, hands-on streak. For 20 years he was a pastry chef and since 1995 he and his wife Eileen have run the Bottlehead Corporation, a Bainbridge Island-based company that manufactures vacuum tube audio kits and high-end finished tube audio products.

Dan, now 62, built his first model at a young age: the Challenger 1, a vehicle that racing legend Mickey Thompson used at Bonneville in 1960 to become the first American to drive past 400 mph. Dan read about it, learned about it, and it kicked off his interest in land speed racing.

In 2016, Dan finally made a trip to Utah, stepped out on that famous racing setting and watched others streak across the Bonneville Salt Flats on their motorcycles. It was probably inevitable: already a motorcycle enthusiast, he caught salt fever. He began looking up rules and information about the event on his way home.

Back in his garage in Poulsbo sat boxes of motorcycle parts he’d bought off Craigslist for $300. The boxes contained maybe 70 percent of one motorcycle, the wrong gas tank, parts and pieces from other bikes. He’d originally hoped to fix that ‘62 Honda, get it running and then flip it.

But after coming home from Bonneville, he eyed those parts in a different light. He got to ordering what he needed on eBay and began working with his mind set on a return trip to the salt flats. This time, he’d be out there himself.

On his second day of racing, Dan gets another crack at the record as the sun begins to rise. He mounts up and rides again, head tucked down below his handlebars, this time with a run under his belt.

Drivers at these events are pushing their cycles to their limits, and Dan keeps a watchful eye on his bike's temperature gauge.

“It’s a little unnerving,” he says. “The motor’s getting hotter and hotter, and you hope it holds together."

Off in the distance Eileen watches, emotional and happy to see him achieving this dream but still concerned.

Dan smashes the previous American Motorcycle Association national record – around 62 mph – in a relatively new category for classic motorcycles. Between his two runs, he averages a touch below 88 mph. This year, he was the only participant in his class – 350 CC, modified, classic, gas – but in talking with a pair of other racers, he knows he and his record will have some competition next year. Perhaps his record will only stand until next year, but for now, the bragging rights are all his.

Salt fever still burning hot, he already has his eyes set on next year’s competition. Perhaps he’ll look for another bike and class and another record, or maybe he’ll tweak his Honda and try to defend his record. One thing’s for sure: He’ll be back.