Coldwater swimmers take a dip in Columbia River during snowstorm

A group of open water swimmers have been taking their adventures to frigid new feats. Their snowstorm plunge wasn’t their first icy swim and it won't be their last. 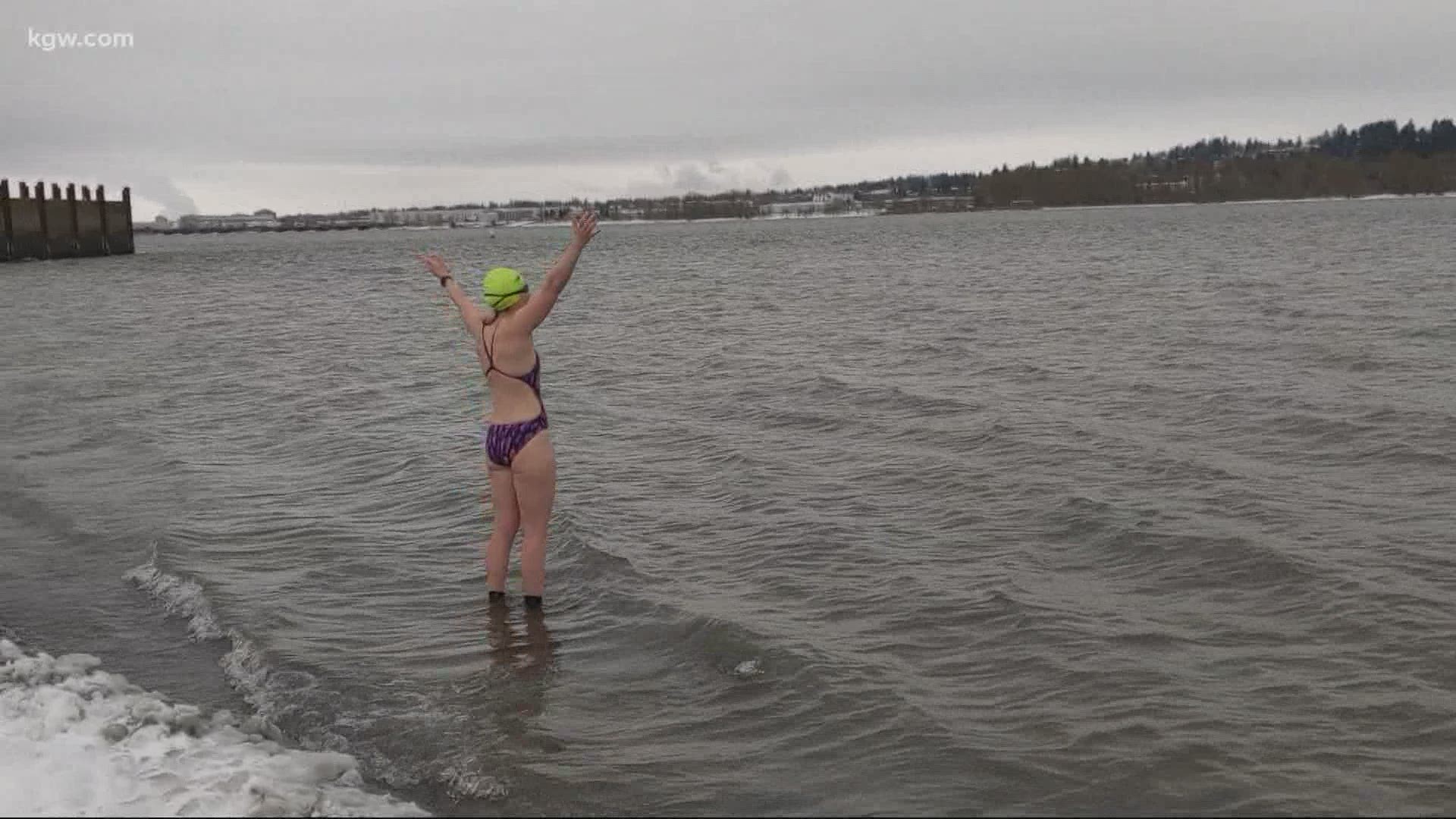 PORTLAND, Ore. — The view of an icy Oregon river may send shivers up your spine and tingles to your toes. On Wednesday, water temperatures were around 39 degrees in some spots. Jumping in may seem like a crazy idea for you but for a group of Portland swimmers, it’s just another day to get in the water.

“This is my home. This is where I live. I feel like I belong in the water," Angie Williamson said. "So, to continue that relationship into the winter just made sense."

Williamson, Eivind Hagen, Dena Marshall and a couple of other avid swimmers make up the group called the Yetis.

“It’s a very organic group of people, where we just send an email out to each other saying, hey what are you doing this date, this time; you want to go for a nice dip,” Williamson said.

During the recent snow and ice storm, the Yetis took their own polar plunge in the Columbia River at Broughton Beach. On Friday, they recorded an air temperature of 24 degrees and a water temperature of 35. They’re a group of experienced cold, open water swimmers. The snowstorm swim wasn’t their first frigid freestyle and it will not be their last.

“Some people put on their running shoes and go out for a run. We like to go for a swim,” Williamson said. “It’s refreshing. It just wakes you up and you feel alive in a way that you can’t any other way.”

They, fittingly, sport Yeti hats to warm up after a blast of frozen river water, each decorated with a bit of personal flair.

“When someone makes a big milestone, traditionally, we gift them with a yeti hat,” Williamson said.

“Just last week I got this Yeti pin,” Marshall showed off on her Yeti hat. “Which, was given to me after my first day swimming in under 40-degree water.”

Many in their group have known each other for years, but the pandemic has brought them even closer together over the love of open water.

Environmental stewardship and safety are top priorities for the group. They not only check conditions and temperatures but also have contingency plans for emergencies.

“I think the most important thing is people recognize their swimming ability and know where they’re at,” Williamson said.

They never swim alone and always have someone onshore with a plan in case something goes wrong.

When the water is so cold it stings, it’s a lot easier to get in when you have the warmth of Yetis waiting for you onshore.

“I think everyone can find that group of people. I mean, we all have our own version of weird. Even if you don’t live in Portland,” Williamson said. “The people I have met in this community have made my life better. They’ve touched who I am in my soul in so many ways I’d never have expected and it’s just cold-water swimming, right, but really, it’s so much more. It’s a huge community.”

If interested in learning more about the local swimming community, open water, or cold-water swimming Williamson recommends you check out the following links: The Outdoor Swimming Society, Lone Swimmer.