Oregon man with Down syndrome, autism reunites with firefighters who rescued him 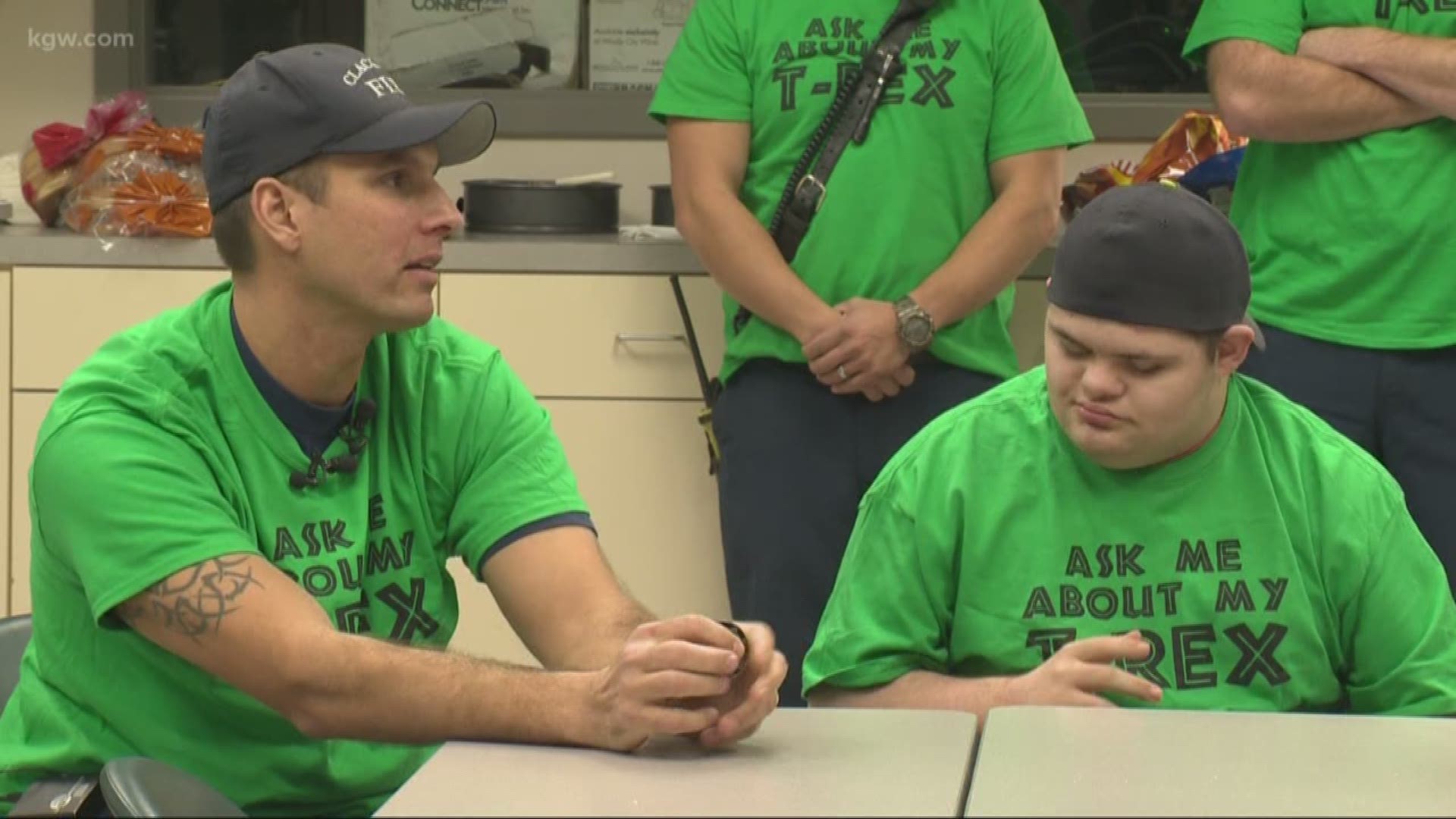 MILWAUKIE, Ore. — It's been almost six months since a cooking accident caught the Wilson family's house on fire.

On June 13, 19 year-old Timm Wilson, who has Down syndrome and autism, locked himself in a hallway bathroom. His mom Tammi was outside. When the fire started she ran inside to save Timm, but because the door was locked, she couldn't get inside and Timm was too afraid to unlock it.

Eventually, firefighters from Clackamas Fire showed up, broke in and rescued Timm. He spent the next couple months in the ICU suffering from severe smoke inhalation and a burn to his left arm. His mom says his health is improving daily.

"He's doing great. He's doing fantastic. He's off oxygen, he's back to most daily activities. Working his way up, but he's not having any trouble really at all. He still has some effects from the smoke, but overall he's doing better than anyone ever dreamt that he would," Tammi said.

On a rainy Tuesday, the Wilson family visited the firefighters of Clackamas Fire District #1.

"It feels like it's come full circle now that Tim gets to meet the guys that did so much for him," Wilson said.

The Wilsons were the guests of honor at a lunch hosted by the same firefighters who rescued them.

"There are no words for what they have given us. Thank you just doesn't even come close. They're part of our family now. There's nothing I can say," Tammi said. "They mean the world to us and they saved all of us that day."

Firefighters would say they were just doing their job. Still, this rescue has stuck with them.

"It's really brought back a lot of emotion back in my life really," Lt. Justin McWilliams said fighting back tears. "This job really makes it so that you try to distance yourself from that kind of stuff and I'll tell you us getting close with Tammi and Kevin (Timm's dad) and Timmy and stuff. It's actually been good emotionally wise reconnecting to our purpose."

The firefighters wore green shirts with the words "Ask me about my T-Rex," Timm's favorite dinosaur. They also presented Timm with a Jurassic Park banner that he could hang on his bedroom walls.

The door which Timm hid behind likely saved his life. McWilliams said a door shut during a fire will buy someone about five extra minutes before it burns through. That door is now a teaching tool at the Clackamas Fire Department. First, they needed to ask Tammi if they could keep it.

"(The fire department) called and asked if they could have the door for training purposes. I said, 'Yeah, you have to treat it good because it's not just any door.' He said, 'What do you mean?' I said, 'It's the hand of God.'"