Hazel was one of only 1,074 pilots to be accepted into the WASP (Women Airforce Service Pilots) program over the two years it was active during WWII. 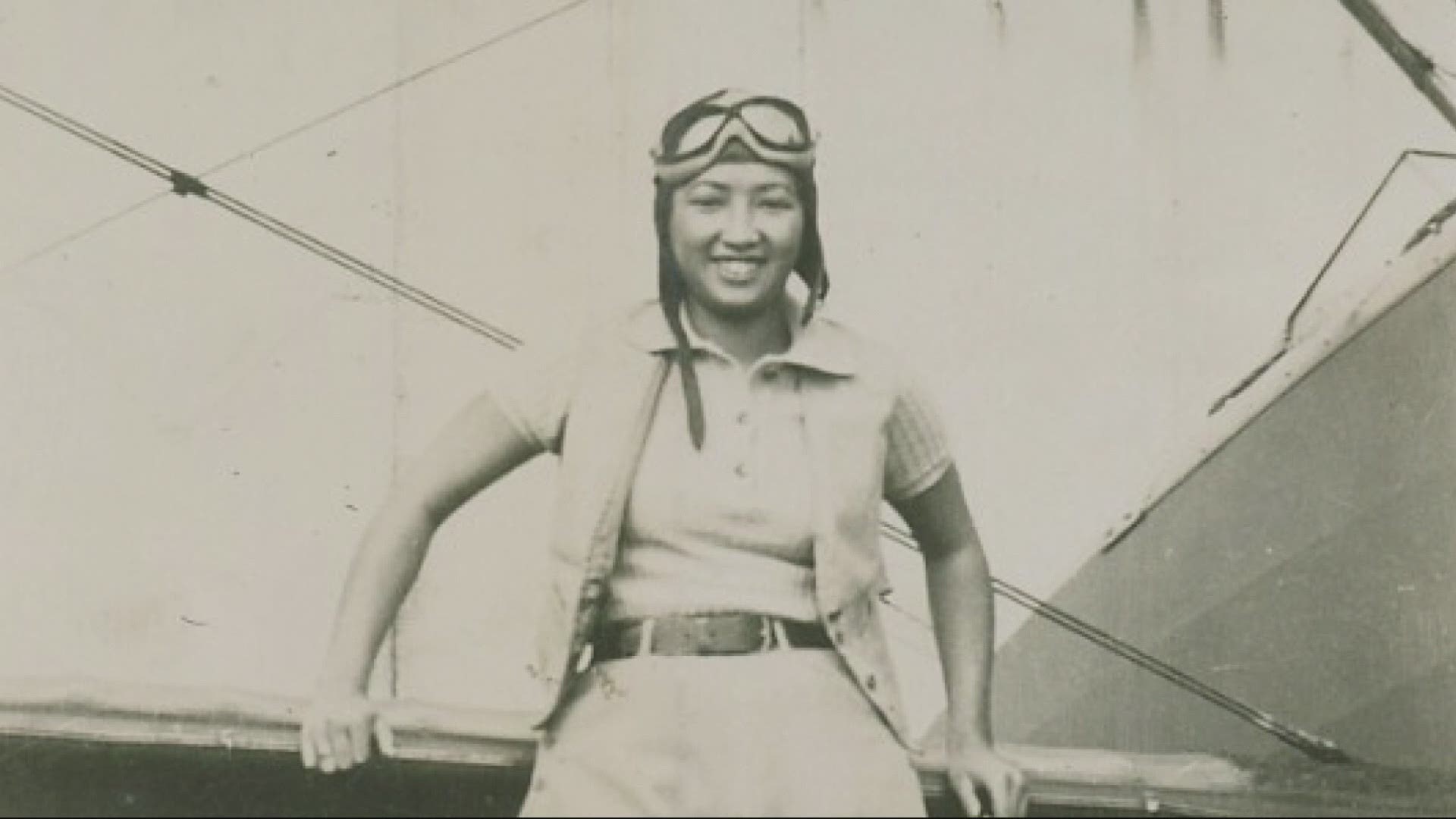 PORTLAND, Ore. — On this Memorial Day and as we end Asian American Pacific Islander Heritage Month, we wanted to introduce you to an inspiring woman named Hazel Ying Lee. She is the first Chinese-American woman to fly for the U.S. military.

Lee was born in 1912 in Portland. Her portrait is hanging at the Museum of Chinese in America. That’s where picture book author, Julie Leung, first saw a photo of Lee.

“There was something bold and fearless about her expression and I wanted to know about her,” said Leung.

She is the author of "The Fearless Flights of Hazel Ying Lee" illustrated by Julie Kwon. Her book came out in March.

“She took her first flight when she was 19 years old,” said Leung. “And from that second on, she was obsessed with learning how to fly.”

Leung said Lee earned her pilot’s license in less than a year.

But Lee got her opportunity in 1942 when she joined the Women Airforce Service Pilots, or WASP, program.

At that time, the military needed pilots because many men were fighting overseas.

“It was a program that hired women to fly these planes to the war front during WWII,” Leung said.

Lee and other women who were a part of the WASP program weren't considered military at the time and served as civilians. Leung said they often flew planes right off the factory floor.

“So they were the first to discover manufacturing defects if anything was wrong with the plane,” said Leung.

Credit: U.S. Airforce
Hazel Ying Lee in the cockpit of a plane

Hazel was one of only 1,074 pilots to be accepted into the WASP program during the two years it was active. Leung said Lee and the other pilots in the program flew a total of 60,000,000 miles during the war meaning she may have been working nonstop seven days a week. In addition, she said Lee was also uniquely qualified to fly fighter jets as well.

“She was an incredible woman. There are so many things, she would write in lipstick Chinese nicknames on her fellow pilots' tail. If you ever see photos of her, you can just see by her smile that she was just a vibrant human being,” said Leung.

Lee was a trailblazer not only for women in general, but Chinese-American women in particular.

“She wanted to do something that no other Chinese-American girl had done before. She did not care that it was not ladylike to be a pilot.”

“Hazel Ying Lee in particular stands in contrast to those assumptions,” said Leung.

In addition, Leung hopes her book helps people re-examine the meaning of patriotism.

“Hazel flew at a time when the Chinese Exclusion Act was in full effect and in a lot of people's eyes Chinese weren't Americans.”

“Despite that fact, she still died in service for this country,” Leung said.

She said patriotism isn't really associated with identity, as it is with a person’s ideals.”

While Leung, of course, loves every part of her book. When asked to read one part that stands out to her, she read this excerpt: “No one could see her eyes, hair, or skin color when Hazel was thousands of feet above. Up here, people were just tiny specks against a vast land. And inside her cockpit, Hazel felt like a dragon chasing down the sun. She leaned into the wind, pushing her plane to go faster. She looked at the horizon, and willed the world to move forward."

Lee died in Montana while serving her country after a miscommunication involving a control tower. Her plane collided with another while landing. Afterward, her family was denied a spot for her in the cemetery because Leung said it was in the "whites only" section. Her family pushed back, writing a letter to then-President Franklin D. Roosevelt.

Her family succeeded and today she and her brother, Victor who also died in service to the country, are buried at Riverview Cemetery in Portland.

According to the U.S. Airforce, after fighting for recognition the women who were in the WASP program were given veteran status and full benefits. Then in 2010, they received the Congressional Gold Medal.

Lee's portrait also hangs on the Wall of Honor at the Evergreen Aviation & Space Museum.

The Fearless Flights of Hazel Ying Lee is the second picture book Leung has authored. Her first is called Paper Sun: The Inspiring Story of Tyrus Wong, Immigrant and Artist. Wong was the Chinese-American artist who was behind the design of Disney’s Bambi.

Click here to read the NBC News story about Lee published in 2017.
More on Lee can also be found here from the Oregon Encyclopedia, a project of the Oregon Historical Society.