The Top Chef alum shares 200 paleo-friendly recipes packed with global flavors that you can easily make as a home cook. 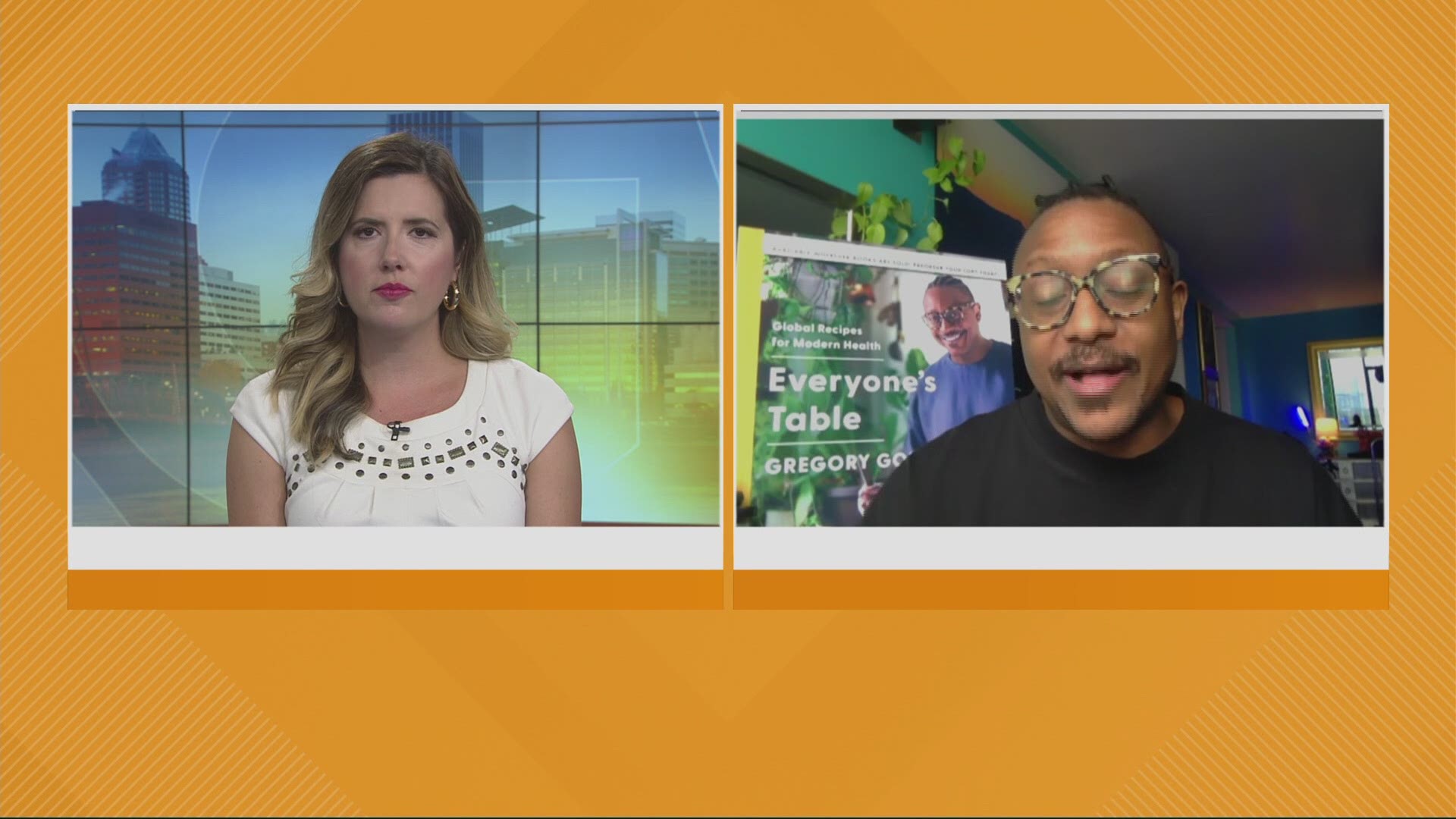 PORTLAND, Oregon — One of Portland's best and most well-known chefs has his first cookbook coming out tomorrow. Gregory Gourdet rose to Portland fame as executive chef of Departure at the top of The Nines hotel downtown. He's now preparing to open his own restaurant, Kann, next year.

You can chat live with Gourdet tomorrow night in a virtual Powell's author talk to celebrate his book "Everyone's Table." It's at 5 p.m. on Zoom. Find the link to sign up here. The link to order the book at Powell's is here.

"Everyone's Table is a health cookbook. It is a paleo-friendly cookbook. So it's, gluten-free, dairy-free, soy-free, it's refined sugar free, it's legume free, but it's really a book that's designed for everyone at the table. So even if you're not any of those things, you can eat any of the recipes and you won't think something's missing," said Gourdet when we caught up with him soon after signing hundreds of copies.

Everyone's Table is a No. 1 new release on Amazon and already on the bestseller list at Powell's. It's also been one of Esquire's most anticipated cookbooks of 2021.

"There are 200 recipes and they all feature global flavors, talking about incorporating different spice mixes into your pantry, working with fish sauce or with different types of chilies. And I also tap into my Haitian heritage. So there's a collection of Haitian recipes as well."

Its release is part of a whirlwind year for Gourdet. He was vocal and out there at the early and massive racial justice marches in the city. He opened a pop-up, COVID-safe outdoor restaurant called Kann Winter Village, testing out many of the recipes you'll see in the cookbook. The pandemic put the brick and mortar version of Kann on hold, but he plans to open in 2022.

"A lot of people (chefs) were able to pivot. A lot of people were not able to pivot, and as time has gone on and people have not had income, they've not been able to open their businesses for anything. Conversations with landlords have gone pretty tough," he said.

Credit: HarperCollins Publishers
Grilled carrots with herby, coconut yogurt from Gourdet's new cookbook Everyone's Table. A version of this recipe was on the menu at Departure restaurant in Portland.

Gourdet's fame as a chef skyrocketed outside the Northwest when he came in runner-up in 2015's Top Chef Boston, and other Bravo spinoffs. Now 5 years later, he's a guest host for Top Chef Portland, airing right now and filmed in September and October.

"Just to have everyone here and to be able to connect producers with some purveyors and help them source the ingredients and help them think about what chefs to feature, I felt like I was really a part of production. That's really cool to be able to kind of highlight some of the best things about our city and state. I definitely tell you, being on the other side is far easier hanging out with Tom and Padma and Gail and getting hair and makeup is a very, very different experience than competing and cooking and sweating for 12 hours a day," Gourdet said with a laugh.

But will Top Chef help Portland as much as the city needs it to when things are safe enough to have tourists back again? "We desperately need that tourism back. We just need these small businesses busy again. I hope Top Chef will remind people that we're a great place to be and when they're ready to travel again and come visit us, we'll be here." 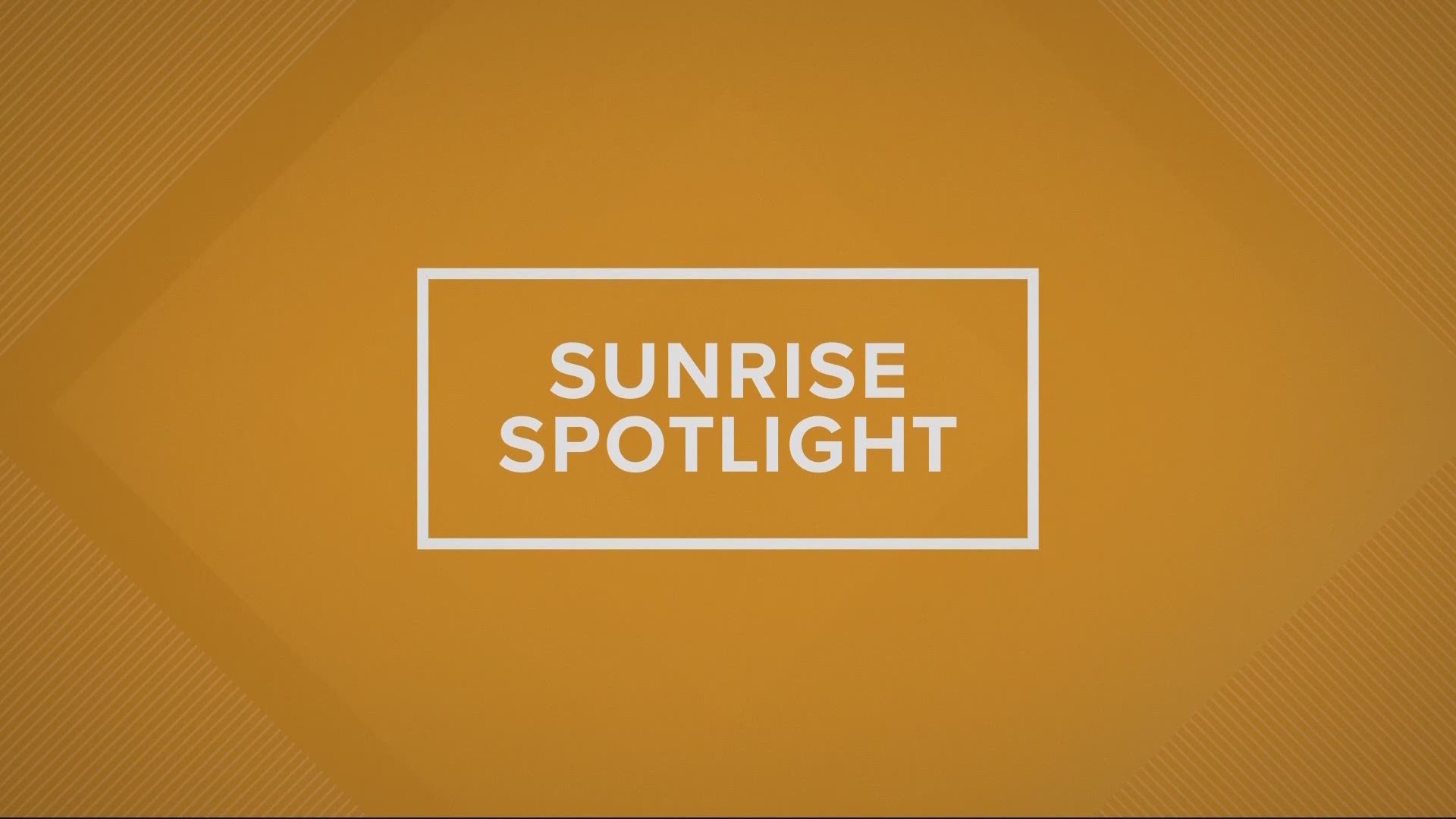 "Every time people saw my name tag and saw that I had this blog called Nom Nom Paleo, they're like, Oh, you need to meet Gregory. He's paleo, he's this really amazing chef," said Tam of her first meeting with Gourdet. It was at a 2012 food blogger's conference in Portland when Michelle Tam was a graveyard shift pharmacist in the Bay Area and aspiring blogger. Now the two are good friends, texting recipe ideas and family pictures, even traveling together, and Tam and her family split their time between the Bay Area and a home in Portland.

She's a New York Times bestselling cookbook author, with a James Beard award nomination and a 3rd cookbook coming out in December for her series Nom Nom Paleo.

"Paleo is eating sustainably raised proteins, lots of vegetables, not eating grains and beans and processed foods. And it's essentially trying to eat foods that make you feel better," says Tam.

The Nom Nom Paleo app, website, books and Instagram account has a huge following. Tam is down to earth, she's a wife and a mom of two, she's a true home cook, making and shooting all the recipes in her real kitchen with the help of her husband Henry Fong. She knows people can be pretty picky about layout when choosing to buy a cookbook. Both hers and Gourdet's books have photos for every dish.

"I do think it's important because I think people won't be enticed to make something unless you see it. And I know that there are the classic, you know, Julia Child books and there are all these new no-recipe cookbooks that are kind of all the rage, but until you feel proficient, you won't even attempt it."

Her biggest advice for his cookbook? Simplify! "He has, I think with encouragement from me and other home cooks that he knows, streamlined it. A lot of the recipes in here are dishes that you've eaten at Departure or Kann Winter Village, but they have been simplified a little, not as simplified as I would simplify it because I simplify it as much as possible. But what he reminds me is, that you should be more spontaneous in the kitchen and be more experimental and use tons of herbs."

"I love that his book has this really great back story about how he became sober and his influences in the kitchen, like from all of the aunties in his life, why he chose Portland, what was it about Portland that's made him stay and be such a champion for the food scene here."