The idea is to let restaurants and businesses apply for permits that would allow them to expand into the street so customers could maintain social distancing. 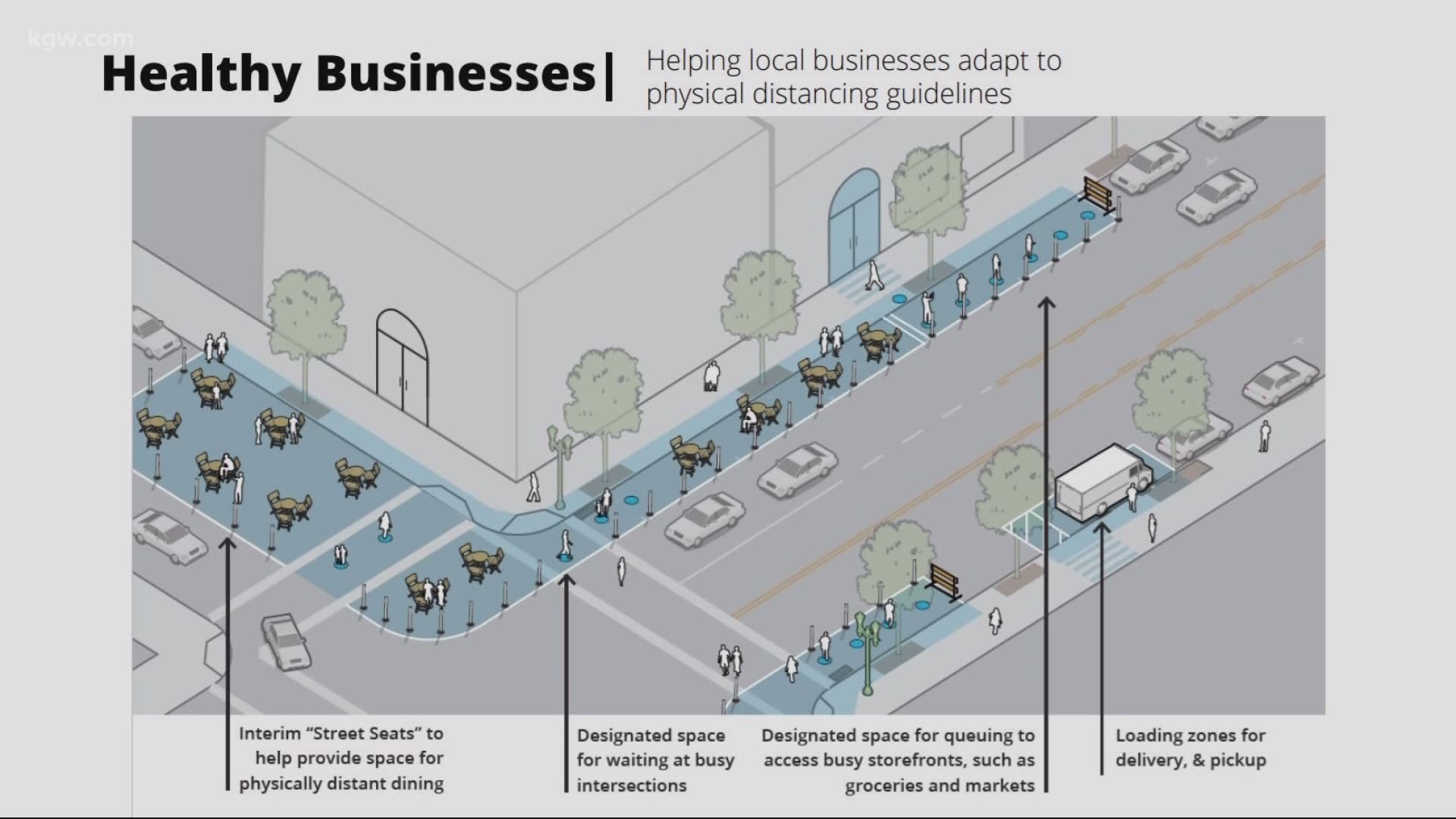 PORTLAND, Ore. — It has been a struggle to survive for many restaurants and businesses in the pandemic. Some have had to close permanently. The City of Portland isn’t blind to the problem and has a plan to, hopefully, help businesses.

The idea is to let restaurants and businesses apply for permits that would allow them to expand into the street so customers could maintain social distancing while businesses could have more space to safely operate.

In a recent Portland Bureau of Transportation (PBOT) presentation at a city budget meeting, a rendering shows room for street seats and socially distant dining, a place to line up for busy grocery stores or markets, and loading zones for delivery and pickup.

“It's really for survival of the industry. We have to find a way to put butts in seats to generate revenue,” said Josh Johnston, who supports the idea. He co-owns eight bars and restaurants in Portland including North 45, Circa 33, and Paddy’s Bar & Grill.

He said the pandemic has been hard on many businesses, including his own.

“We laid off just about 200 people including myself and my business partner,” said Johnston.

“Had to go into triage mode to try and survive. So we suspended all bills and payments.”

He said like many of his employees, he is on the Oregon Health Plan now and unemployment. He hasn’t received a check yet.

All over the city, shops and restaurants are either boarded up, closed, or trying to adapt.

“We look outside, it's extremely sad to see all these businesses are completely closed,” said Hoda Khouri, who owns Hoda’s Lebanese Restaurant in the southeast Portland.

“It’s really scary to work 15 years to build this and to have it kind of ripped away from you. We don’t know how we’re going to survive yet,” said Johnston.

But even when Multnomah County does start to reopen, Johnston said if restaurants have to operate at half capacity, it'll still be tough to make ends meet.

“The restaurant industry is a really low-margin business. Nationally it’s 3-5% net profit. So restaurants can't afford to survive on half their revenue. They need every dollar they can get,” Johnston said.

Portlanders we spoke with are also on board.

"If there was somewhere to go where you could still sit down and gather with people but still be distanced from them, I think that would be good. I would do it,” said Carrie Flores.

“Especially with the warmer months coming up, I think that would be fun,” said Liesel Grolbert.

“We would love the idea to have Belmont like Europe. Most of Europe, they have streets closed with sidewalk patio restaurants,” she said.

That idea already has some traction. Portland resident Zach Katz is spearheading the “Portland Promenade Project.”

In his proposal, two streets in Portland would be closed off so businesses could more safely reopen. His plan calls for NE 28th Avenue to be closed from E. Burnside to NE Davis, as well as SE 28th Avenue between SE Ankeny Street and E. Burnside. It would begin with a temporary Summer pilot program. He said he’s been in contact with the City of Portland about his idea and he’s hoping it’ll catch on.

Katz said about 20 businesses have already said they support his idea.

Meantime, a spokesperson for Portland Commissioner Chloe Eudaly, who heads PBOT, said in a statement in part, “Commissioner Eudaly and PBOT's plan for using the public right of way to support Portland’s businesses is well underway—our plan considers open air commerce as a whole, meaning we are designing a permit process that will allow not just restaurants but bars, retail, and personal service businesses to access the right of way.”

Eudaly's spokesperson said there are no specific areas in mind for the plan. It’s for businesses citywide.

Starting Thursday, businesses can apply for a permit for free. But issuing them will be tied to the county's reopening timeline.

The city plans to release more details about the plan on Thursday.

RELATED: A moment of silence for all the Portland nerd places that won’t make it out of the pandemic