The celebration commemorating freedom for African American slaves has a history in Oregon. This year, it's shifting online for the pandemic. 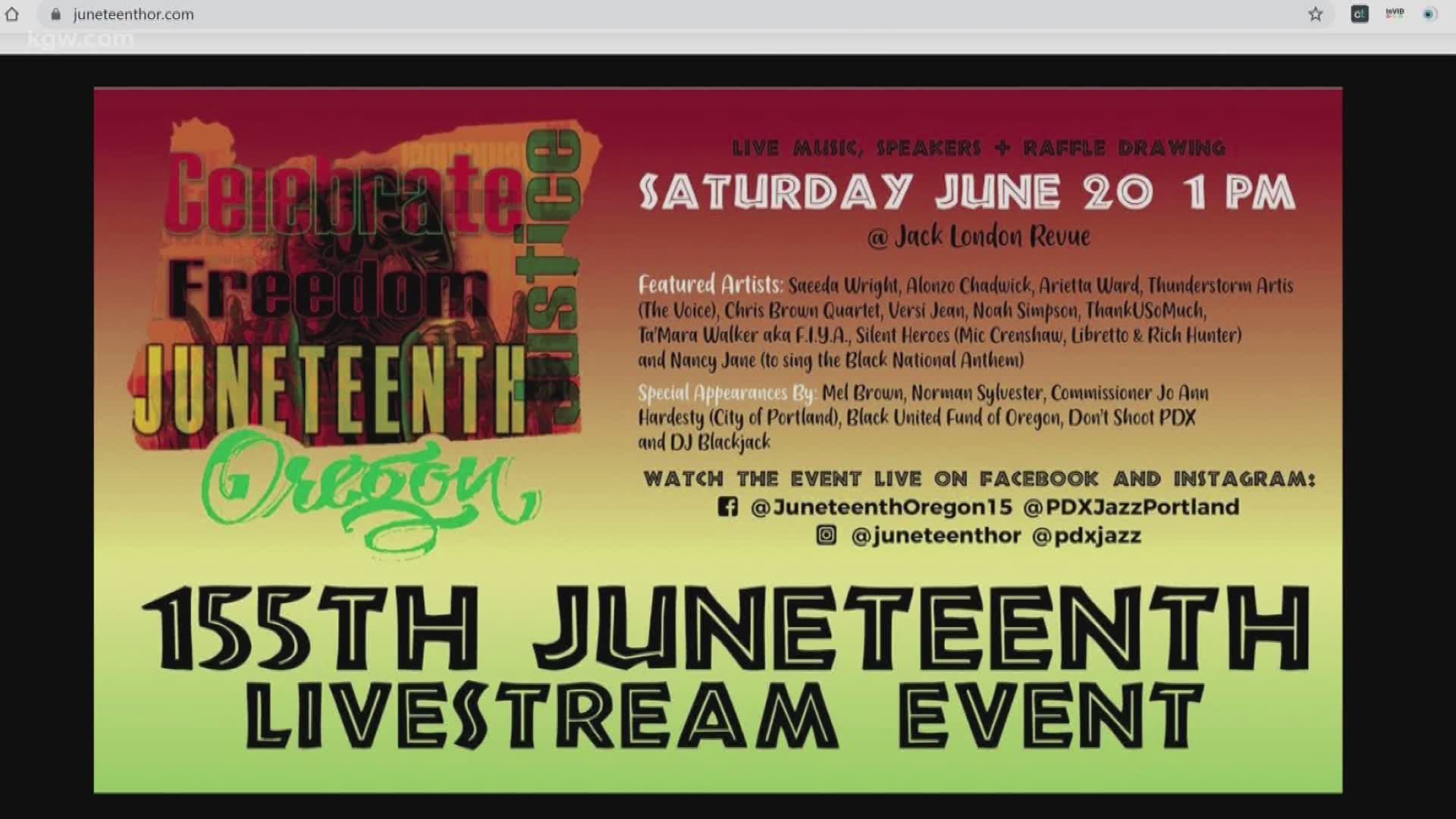 In 1945, Clara Peoples started a local celebration. She later became known nationally as the mother of the Juneteenth holiday.

Heather Coleman-Cox works with the nonprofit Juneteenth Oregon, which is taking celebrations online this year.

"It should be celebrated nationally," Coleman-Cox said. "Just like we celebrate Fourth of July as a country for our independence from Europe, it's just equally as important to celebrate Juneteenth. The independence of African Americans."

Although some outdoor gatherings and ceremonies happened around Oregon Friday, Juneteenth Oregon took precautions for the COVID-19 pandemic.

With the help of PDX Jazz, it will stream live performances and speeches online Saturday.

Coleman-Cox said this year, the deaths of George Floyd, Breonna Taylor, and Rayshard Brooks have amplified protests and demonstrations against systemic racism.

"I'm just blown away by the response by my white brothers and sisters [in Portland] out there marching, making change," Coleman-Cox said. "We cannot deny the inequality, the unequal protection under the law, instances that African Americans have endured since they were brought to this country."

"To me, it just gives some modicum of hope," Margles said.

OJMCHE had collaborated with the NAACP to host a special Juneteenth commemoration but the event was canceled because of COVID-19. Despite being closed, the museum is working on outreach to educate people about Oregon's history of racism.

"From the very beginning, Oregon was admitted to the union with exclusion at its core," Margles said, describing exclusion laws in Oregon's first constitution. "People [of color] were denied the right to visit, the right to own property, the right to live in this state."

Margles said the museum aims to open an exhibit about discrimination and resistance in Oregon in the fall. Until then, people can see and learn more online.

"This might be a time when people really see how much has to change," Margles said.

Coleman-Cox echoed that, saying this is a time for people of all colors to speak out against inequity and celebrate their neighbors who continue the fight for justice.

She encouraged people to donate or volunteer to help organizations like hers uplift the black community.

"The time is now. The country and the world realize it," Coleman-Cox said. "And we are all coming together as one to make this happen."

Juneteenth Oregon's live events will be streamed from 1 to 4 p.m. on Saturday on its Instagram and Facebook pages, as well as through PDX Jazz's pages.

RELATED: Lawmakers call for Juneteenth to be a federal holiday

RELATED: The history behind the holiday: 15 things you may not know about Juneteenth