KEX Portland hopes their selection of Oregon wines will prove that kegs aren't just for beer. 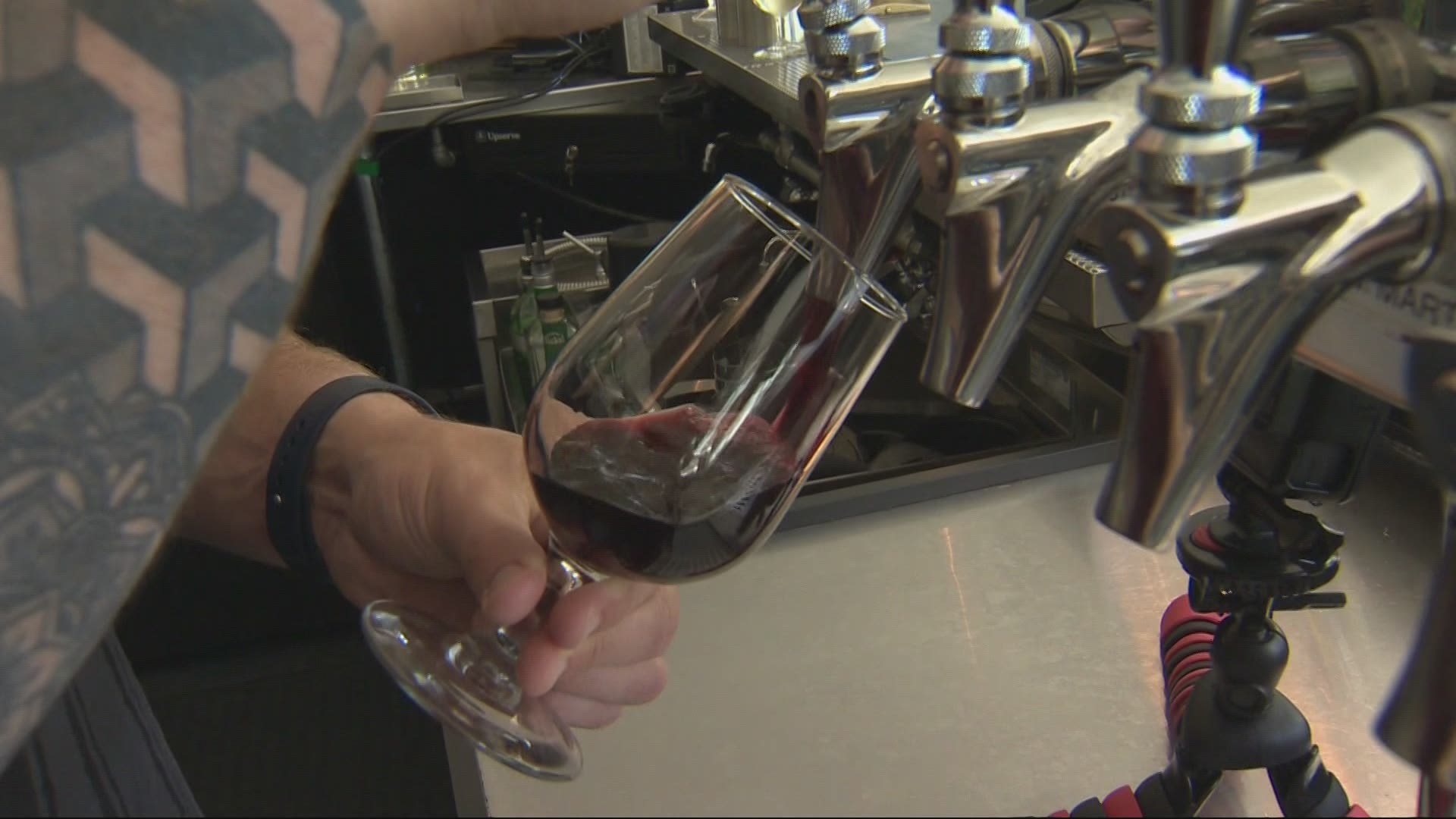 PORTLAND, Ore. — Portlanders are trained to expect the unexpected. So when we moseyed into KEX Portland, a boutique hotel on Northeast Martin Luther King Jr. Bloulevard and Couch Street, the surprise on tap was — on tap.

KEX’s ground floor restaurant, Dottir (the Icelandic word for daughter), serves 10 Oregon wines by the glass, all poured from a tap.

“We've garnered a reputation for it,” said KEX co-owner Sean O'Connor. He adopted the concept of offering kegged wine when the hotel opened in late 2019. After finding they didn't have enough storage space to accommodate a bottled wine-by-the-glass list, they realized they could do it by using kegs.

“I'm literally driving around town and to the (Willamette) Valley and taking kegs to people,” said O’Connor, touching on the relationships he’s built with local wineries.

O'Connor uses aluminum kegs which he buys from Portland keg wine pioneer, Cooper’s Hall Winery and Taproom. The kegs can be reused hundreds of times and each holds the equivalent of 26 bottles of wine. Avoiding the extra glass, labels, cork, boxes and transportation saves O’Connor about $150 per keg, and helps the environment.

“I do it because I believe in the sustainability piece and I believe it allows us to support local wine makers in a very unique way,” said O’Connor. “But if it pushes people to serve keg wine out of a financial goal, then great! Let's get them in the door.”

Since the pandemic, O'Connor said a lot of restaurant owners have asked him about kegging wine, hoping it might help them run their businesses more efficiently. After reopening KEX June 11, O'Connor learned firsthand how long kegged wine could actually last, even after being tapped.

“Because of COVID, we had wine from before we closed in March of 2020 that we're pouring right now,” he said.

While customers can't order wine poured from a bottle at Dottir, they can order bottles of wine — the bartender just fills reusable glass bottles from the tap; table service only, they can’t purchase them to go.

“It requires kind of a cognitive shift,” said Dottir bartender, Bailey Apon. “It's getting away from these preconceived notions of what is high-end wine.”

“You can find these really beautiful, surprising things and at an approachable price and it's fun to walk [customers] through that,” said Apon. “Hopefully they leave looking forward to getting more kegged wines at different establishments.”