How five types of Oregon drivers deal with snow

This inability to handle even a few inches of snow on roadways has become so common it’s almost cliché. And in the aftermath, the conversation always seems to drift toward the generally lacking skills of Oregon motorists. 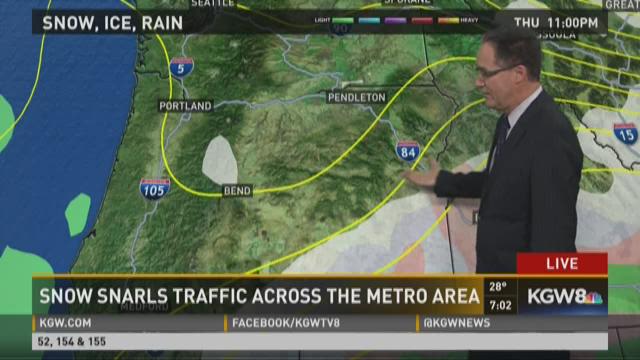 Oregonians have once again been brought low by snow.

Whether it was Portland drivers averaging five accidents per hour during Wednesday’s snowstorm, or downtown Salem morphing into a parking lot, the recent weather rendered a decent percentage of the Willamette Valley population helpless.

This inability to handle even a few inches of snow on roadways has become so common it’s almost cliché. And in the aftermath, the conversation always seems to drift toward the generally lacking skills of Oregon motorists.

To make light of a challenging week, we in the Statesman Journal Outdoors Department have cataloged five specific types of drivers on Oregon’s roadways — and how they deal with the dreaded scourge of snowflakes.

We undertake this exercise purely in jest, in the hope that a harmless bit of self-deprecation — and geographically-based stereotyping — might alleviate the strain of “Snowpocalypse 2016.”

You moved here from Ohio, Michigan or Minnesota — or one of those lesser states like Wisconsin — and take great pride in informing people that you spent much of your life driving on snow and ice.

As such, you see items such as chains or studded tires as unnecessary and even silly. You take every opportunity to enlighten coworkers of the harmlessness of a “few inches of snow” and shake your head in wonder at schools that close based on weather reports.

After all, when you’ve grown up on a frozen tundra patrolled by wolves and polar bears, where the temperature only occasionally breaks minus 20, storms like last Wednesday’s are nothing to be concerned about.

And while you do have winter skills behind the wheel, your arrogance has led you to forget one important fact: there are things called “hills” and “mountains” out West, and when roads up them are covered in ice, no amount of turning into the slide will save you from calamity.

Did you make it home? Alas, you were too good for chains or traction tires, attempted to cross ice-covered Marion Street Bridge and slid back to the bottom. A friendly, well-equipped Californian helped pull you out of a snow bank.

You take the snow as a personal challenge to your manhood and drive with all the delicacy of Ultimate Fighting champion Conor McGregor. Your gigantic truck and tires do maneuver well on the roads, but instead of using this power responsibly, you weave in and out of traffic, gunning the engine on the ice and weaving into and out of fishtails.

From an open window, you look upon the snow with scorn and yell, “you mad bra?!!” while whipping circles in the parking lots of grocery stores.

Did you make it home? Two words: emergency room.

When your forefathers traversed the Oregon Trail in covered wagons, battling all manner or hostiles and wild animals, they survived because they were prepared.

In that tradition, you prepare for any and every circumstance in foul weather, putting chains on your snow tires at the first sign of snowfall and stocking your car with enough supplies to survive four to six months (depending on calorie intake).

You don’t drive when the roads are icy if possible, but if you do, your hands are at the 10 and 2 position while taking each corner with the skill of a mountain man guiding his trusty steed across the Santiam Wagon Road.

Did you make it home? Obviously. Just in time to regale the children with tales of great-great-grandfather Lee and his struggle to settle the Oregon Country.

You’ve written lots of poetry about snow and its metaphysical qualities while sitting in a Bay Area coffee bar. But actually seen it? Not so much.

So when you decided to relocate north — given Portland’s status as the new center of spiritual energy — the idea that snow might arrive was an existentially pleasing thought vibe.

It was, that is, until you had to drive your Prius through downtown Portland as snow covered the roads.

You were against using chains, of course, given their impact on the environment (a story on Facebook said they imperil the greater sage mouse). You compensated by driving down the well-plowed road at roughly 5 MPH, white knuckles on the steering wheel.

Did you make it home? See that car abandoned on the side of the road? Yup, you guessed it!

Instead of joining the polluting heathens stuck in snowstorm gridlock, you saved both time and the environment with a snowy commute on two wheels.

On fat bike with 20-inch wide tires, you cruised a landscape of white, rolling through city parks and over bridges without fear. A commute that took drivers 4 to 6 hours took you 30 minutes. And while, yes, you did take a few spills on treacherous patches of ice, the 159 layers of clothing saved your from any real damage.

Did you make it home? Safe, sound and with only a few broken bones.

If you really want to yell at the author, you can reach him at zurness@statesmanjournal.com.