A man known as "Helmet John," for the red motorcycle helmet he sometimes wears for protection from unseen forces, is helping his community rediscover what home is. 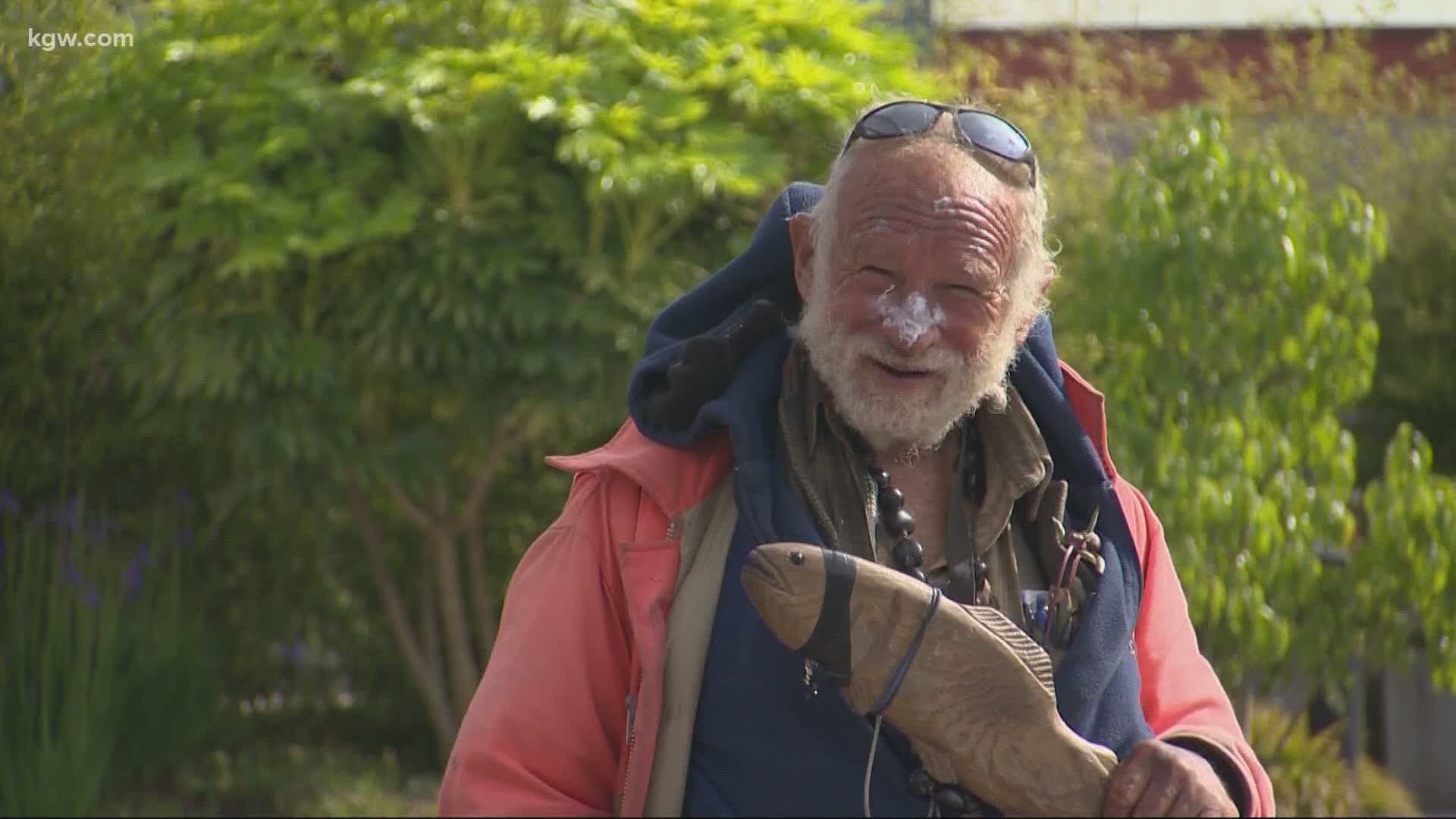 ASTORIA, Ore. — In Astoria, Oregon, near where the mighty Columbia River flows into the Pacific Ocean, in a place Lewis and Clark once explored, more than 200 years later, another well-known local figure explores the streets of Astoria. Alone.

This is the unlikely story of how a man known as "Helmet John," for the red motorcycle helmet he sometimes wears for protection from unseen forces, is helping his community rediscover what home is.

During the height of the coronavirus pandemic, the city's craft breweries, bakeries, and bistros were locked up. Under Gov. Kate Brown's stay-home order, people were sheltering in their houses.

For John Albert Wedell, a man without a house who sleeps on the city streets, he was home.

"I'm outdoors in the winter, too. You know, rain, snow, sleet, hail, here I am," Wedell said while showing a thumbs up sign.

Then, Wedell laughed. The hearty laugh punctuates nearly everything he says. "They say I'm a colorful character," he said. Then, another laugh.

Wedell has wandered the streets of Astoria for several years. Most of the local townspeople know Helmet John and gave him that nickname. Many wave and say hello. That is, when they were out on the streets shopping. On this day, the streets were abandoned.

The 73-year-old Wedell has been offered shelter, but has chosen to live life his own way for now. Although, when asked, he does admit to dreaming of winning the lottery and buying a house.

For most people, Helmet John is a mystery. How exactly he ended up homeless, no one really knows. But, there's a lot more to Wedell than his current circumstances.

"I have a master's in physics at Berkeley, a master's of business at New York University Business School, so I have enough theoretical background to know what's going on here," he said.

"He's a genius," said Jeff Daly, another well-known citizen of Astoria. Daly is noted for restoring parts of the town's history, including the Joy Train, a former American Legion float. He's used it to give tourists guided trips of the hometown he loves.

Daly also happens to be a filmmaker.

"I've known John five years. Being a cameraman, a photographer, how could you not be attracted to his story," he asked.

What, he wondered, is life like for him during a pandemic? He also wanted people to learn about the life of those in the city who are homeless.

"Let's not forget this whole group of people who live on our streets. Live in our communities. How do we make sure they are taken care of and still are a part of our community?" Jeff said.

So, Daly followed Wedell for weeks, day and night, chronicling his life during the coronavirus outbreak, in a 30 minute-documentary. Daly narrated the film.

In one passage, he said, "How Wedell transformed from a person born into the American dream to Astoria's most recognizable homeless figure, the locals named Helmet John, is both a heartbreak and a mystery. The kind of mystery that creates urban legends."

And that legend was about to hit the big screen. Or at least a makeshift one on the wall of the American Legion building in the old Safeway parking lot.

It's a place where John and other people who are unhoused often gather, and of course, they know John.

"He's a good person. He will bend over backwards to help you out," said one homeless man as he leaned against the side of the American Legion building.

"At 8:30 tonight, this abandoned parking lot will be alive with music and with people waiting to see Helmet John," Daly said.

Daly caught sight of a car pulling up and yelled across the street. He recognized the city's former mayor.

"Madame Mayor, are you coming to the drive-in tonight?" Daly asked.

Daly planned to show his documentary as a pop-up drive-in movie using a portable projector. The audio was to be transmitted over a low-wattage FM radio transmitter people could listen to in their cars.

"I wanted to show it in what is essentially John's living room," Daly said.

The word got out through flyers and on Facebook. When the sun went down on a Saturday night in May, dozens of cars showed up to watch John Wedell's big screen debut.

With a volunteer valet to direct them, they all parked at a safe social distance apart.

Credit: KGW
A family in the bed of their truck getting ready to see Helmet John

Emily, another volunteer, sold candy from a shopping cart she delivered to hungry moviegoers, using a basket attached to the end of a long pole.

"You want some snacks? We have M&M's, peanut or plain," she told one family.

Audience members donated what they could for the movie and candy. Over three weekends, the pop-up drive-in has raised $6,500 for the local United Way.

"Only in Astoria would you find something like this happen with an only-in-Astoria character: Helmet John," said Daly.

It was the perfect escape for people who had been cooped up, isolated at home for weeks.

"We just wanted to bring our kids out tonight to learn a little more about Helmet John," said one dad.

"I think he is one of the staples of Astoria. I think it's about time the community is showing that he is important," said another woman.

After the previews, which were other short films Daly has directed, Helmet John gave his familiar thumbs up sign followed by a chuckle.

"Yes," he said. He was ready for his big moment.

The opening credits of Daly's documentary, "Helmet John, Astoria is Home," flashed across the pop-up drive-in screen. Helmet John strolled in front, silhouetted against the screen, watching, as he watched himself tell Daly about his life. Daly filmed how Wedell methodically moved his many mismatched tattered suitcases, bicycle, and shopping cart full of assorted items he's collected, from one end of the street to the other.

Daly sketched out Wedell's early life, the death of his father, and court documents that said Wedell has schizophrenia. Daly interviewed an Astoria police officer about Wedell.

"Astoria is John's home. Home is where you're loved," the officer said.

Wedell smiled and nodded. He seemed amused and pleased with Daly's depiction of his life.

Credit: KGW
John Wedell watching the film about his life

"At the end of the film, there is a special moment," said Daly. "Helmet John honks the horn of the Joy Train."

As the horn started blowing, the moviegoers in their cars, started honking their horns. Loud bursts seemed to go on for minutes, in appreciation for Daly's film, and of their local star, Helmet John.

"He's made a difference in my life, for sure," said Daly.

As the horn sounds faded, Wedell gathered up his belongings and quietly slipped away to find a place to lay his head for the night.

"I think after people saw that movie, I think John can sleep pretty much where he wants tonight," Daly said.

Daly said he hopes those who watched his documentary learned something about John Wedell, talked about it with their families, and felt more empathy for people who are homeless.

For John Albert Wedell, Astoria is home. And the former physicist knows even during a pandemic, the most important laws in nature aren't the forces that pull us apart, but the gravitational pull that brings us together in the place we all call home.