The community, devastated by September's wildfires, relies on a small local food bank as it works to rebuild. You can help through the KGW Great Food Drive. 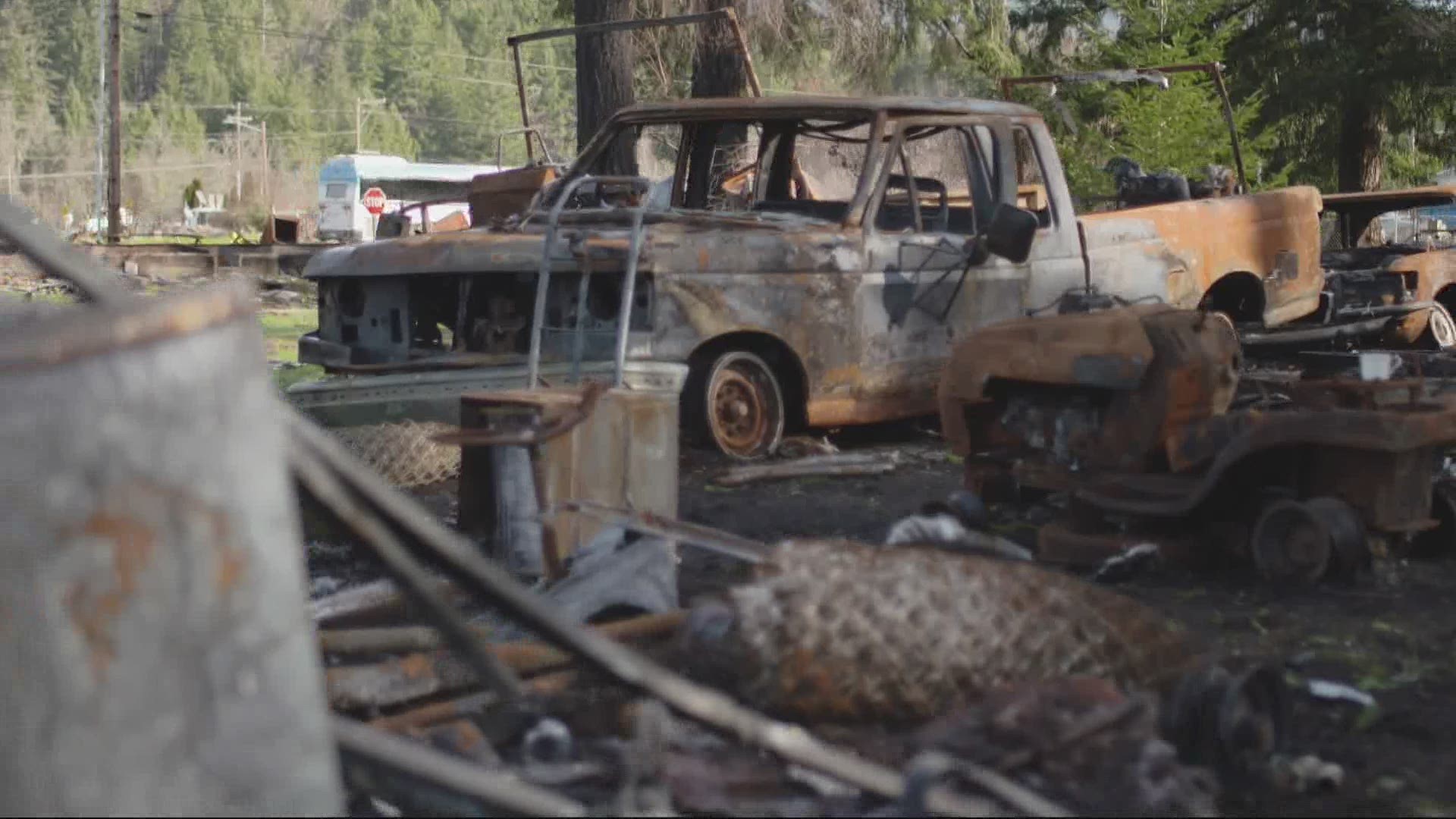 MILL CITY, Ore — 2020 has been a whirlwind for everyone, but for communities hit by Oregon's wildfires last fall, it’s been a one-two punch of devastation. Through so much loss and pain, we’ve also seen the power of community and the resilience of spirit.

That is what you’ll find in those working to fill hungry bellies at the Mill City Gates Community Assistance Center.

“It swept through Gates and everything was just totally gone,” Susann Heller-Tuers said.

The flames were put out months ago, but the burn scars in the Santiam Canyon go beyond the trees.

“You can’t understand how devastating it is until you actually look at it, and you see it,” Heller-Tuers said. “I mean, it looks like you’re in a war zone.”

“It’s one of those things that, I think, until you’ve lived through it, you can’t imagine what it’s like,” she said.

Heller-Tuers was grateful her house was still standing after the evacuation, but her home, the canyon, was changed.

RELATED: Students in Santiam Canyon head back to in-person learning

Heller-Tuers is more than a community member. She’s a community advocate who works at the Mill City food bank.

“It’s technically the Mill City Gates Community Assistance Center, but everybody knows it as the food bank,” she said.

Everybody knows it, perhaps, because it’s so necessary.

Hunger has nearly doubled amidst the pandemic and wildfires in Oregon, according to Oregon State University research.

About half of the people in Heller-Tuers' community were displaced. Now, many are living in travel trailers, tents and makeshift shelters, waiting until they can rebuild.

That’s where the food bank comes in.

“Well, we hope it’s a lifeline,” she said. “This is open to everyone who was evacuated. So, if you were in this canyon during the fire and you need food, that’s what we’re here for.”

All donations are needed in the canyon right now, but especially food.

When her neighbors in need don’t have to worry about where their next meal will come from, Heller-Tuers says they can focus on the other basic needs of getting by.

“It’s going to be cold. You’re going to have to get more propane because we have people literally living in their car still,” she said.

Years ago, Heller-Tuers moved away from the canyon, but found her way back. The same goes for her husband. The two reconnected and sparked up a romance at the pantry. They’ve been married for five years now.

It’s that ability to come home, that return to home, Heller-Tuers hopes continues in her community.

“I think, if you have your livelihood and you have a little extra, think about those people who have nothing. And those are the people we need to give to,” she said.

It’s not just the place Heller-Tuers loves; it’s also the community and the people. And right now, they need help.

“If we can’t give to those people, we’re going to lose them,” she said, “And those people are part of our community, and that’s what makes this canyon the way it is.”

The Mill City Gates Community Assistance Center relies on donations to feed the community. They are one of the many local organizations benefiting from the KGW Great Food Drive.

Click here to donate to the KGW Great Food Drive.