The Blanchet House of Hospitality has become a fixture in Northwest Portland, providing more than 300,000 meals annually to those in need. 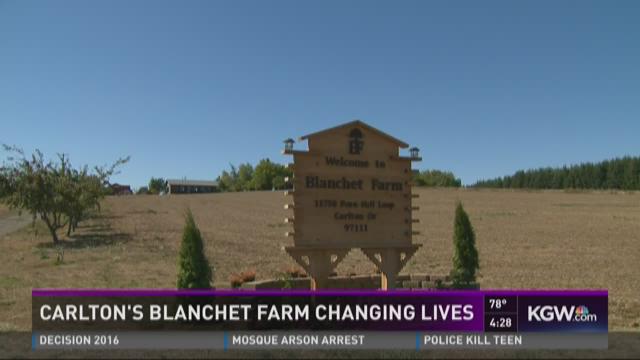 PORTLAND, Ore. -- The Blanchet House of Hospitality has become a fixture in Northwest Portland, providing more than 300,000 meals annually to those in need.

But there is more to this organization than just feeding the hungry.

The Blanchet House also provides addiction services for those willing to make the commitment to their program. They provide these services at both their new facility in downtown Portland and the Blanchet Farm near the city of Carlton.

The Blanchet Farm is truly a unique place, and one can’t help but feel moved move by not only the peacefulness of the property, but by the feeling of community that exists between the residents.

This feeling of community is fostered by a man who lives the Blanchet mission, Ross Sears.

Ross began his journey as a resident in the addiction program, and has now been the manager at the farm for almost seven years. However, this is no ordinary managerial position, as his day doesn’t end when he clocks out at 5 p.m.

Ross lives on the Blanchet Farm and takes a personal interest in every resident. He is there to check them in on the day they arrive, he is there in the middle of the night when they need someone to talk with and he is there when they transition out of the program and back into society. When he sets the work schedules, he makes sure to include himself because he believes it’s important for the residents to see him not as a boss, but as someone who is sharing a lifelong journey.

Ross’ commitment to doing things the right way is part of his own sobriety, but that doesn’t make it easy. His job is difficult and he rarely receives the recognition he deserves. So if you happen to see Ross Sears, shake his hand and tell him congratulations on his journey, and thank you for bringing others along with him.