Men living at the Blanchet Farm in Yamhill County help take care of goats, chickens, baby pigs, and now bees, as they work on their recovery. 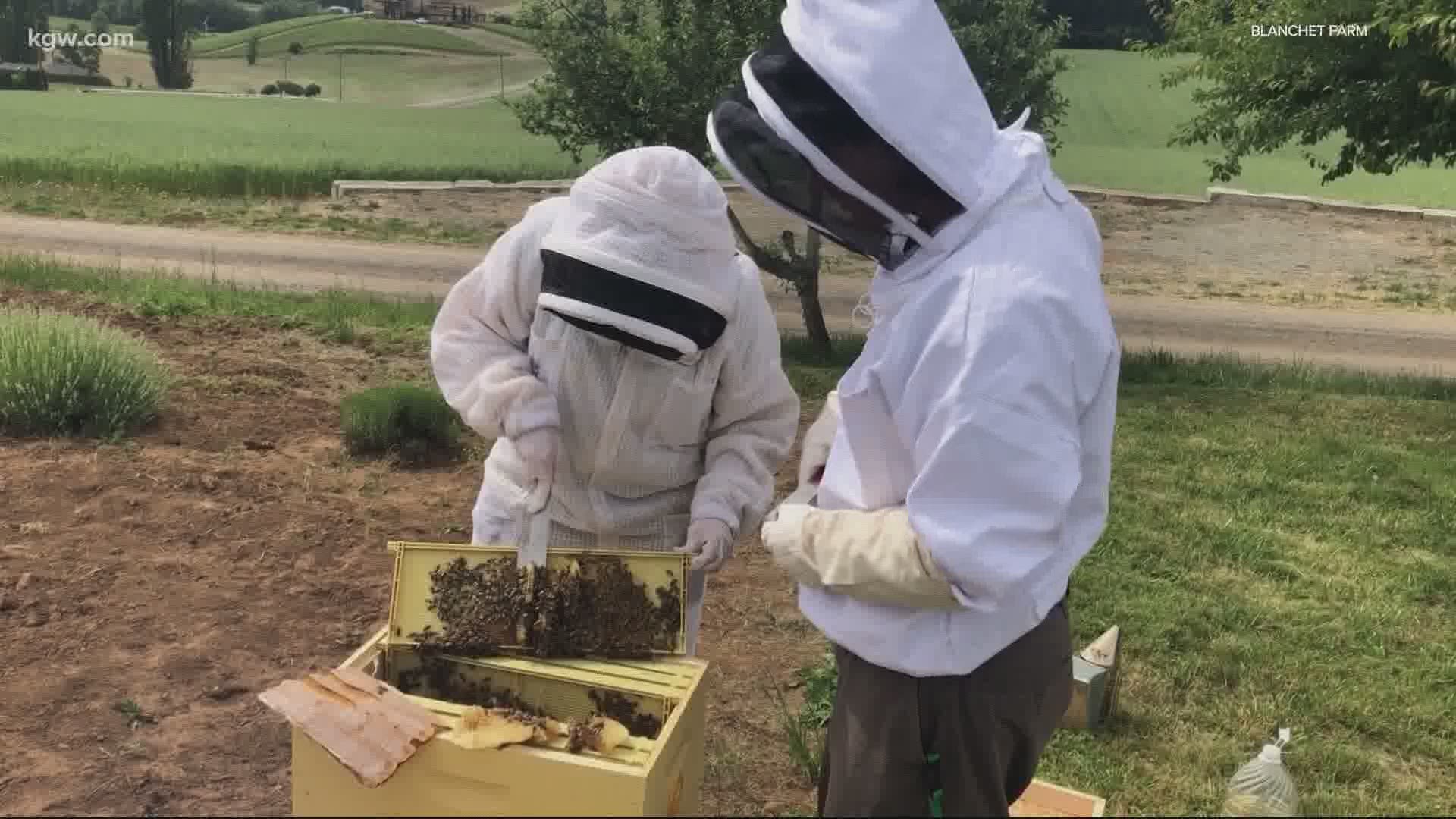 PORTLAND, Ore. — There is so much going on in the world right now, from the pandemic to protests.

But people are still going through other struggles like addiction.

On a farm in Yamhill County, bees are helping men overcome their obstacles.

The Blanchet Farm in Carlton just started up a beekeeping program for the men who live and work at the farm. Four hives housing about 20,000 bees each are a new addition to the 62 acres of open space. In the fresh air and outdoors is where men who struggle with addiction come to clear their heads and work on their personal recovery.

“I have schizophrenia and being out here, I don’t hear anything anymore,” he said.

Shahrazi has been living at the farm for about three months. At one point in his life, he’d been homeless in Portland, addicted to meth. He chose to come to the Blanchet Farm because he needed help. He had gotten clean but was starting to use more marijuana. He said he didn’t want to relapse.

“It helps to have a positive spin on things now which, when I was in use, I wouldn’t when things went bad, I would use and try to get the pain to go away,” said Shahrazi.

These days, he’s busy learning to take care of bees.

“[I’m] changing their sugar water, looking at their different honeycombs and spraying them with smoke to get them to calm down,” Shahrazi said.

Katy Fackler is volunteering her time at the Blanchet Farm, teaching residents there how to care for the bees. She was the one who approached the Blanchet House's Executive Director about her idea to start a beekeeping program on the farm.

“Beekeeping has long been known as a tool for therapy,” said Fackler.

The rest of the farm is a source of therapy too, for the 21 men who normally live and work there for up to nine months. Some stay longer. The men have a commonality.

“It’s 21 guys struggling with similar things. Their stories are little different but they’re a whole heck a lot more alike than anything else,” said Ross Sears, who manages the Blanchet Farm.

Their days are filled with recovery meetings and a lot of hands-on work. From the goats, to chickens, to baby pigs, there’s no shortage of animals to take care of.

“Caring for something else for a little bit, takes us out of the self-centeredness we’re so used to. That is a big deal,” Sears said.

“I get to watch guys change right in front of me. That’s pretty cool.”

For Shahrazi, the farm and now the new bees are a welcome break from the hustle and bustle of city life.

When asked about becoming a master beekeeper, Shahrazi had faith that skill would come with time. Maybe a couple weeks of training might do the trick.

The Blanchet Farm gives residents eight months of free room and board and is funded through donations. There is usually a short waiting list. People who go to the farm often hear about it through word of mouth, or are referred through the justice system or even hospitals.