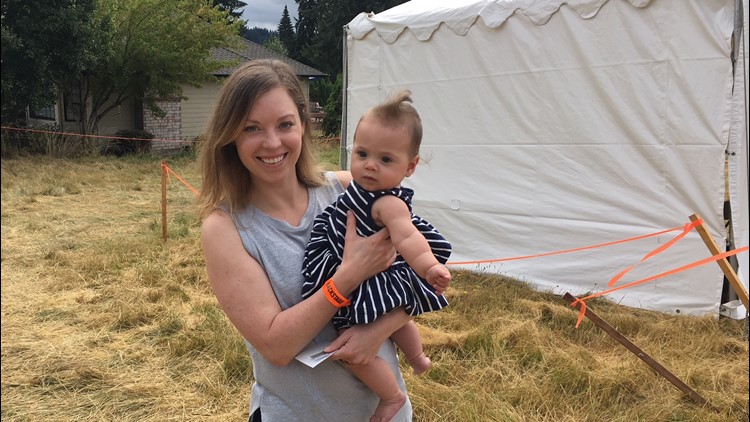 After checking in to Pickathon 2018, before the crying and spills.

Babies at Pickathon: What it's actually like to bring an infant to the festival

What it's actually like to take a baby to Pickathon, a family-friendly independent music festival outside of Portland.
Author: Sara Roth
Published: 8:08 PM PDT August 3, 2018
Updated: 7:57 AM PDT August 6, 2018

HAPPY VALLEY, Ore. -- Eight years ago I drove my boyfriend’s rattling Volkswagen Jetta from Bend to Happy Valley, arriving at the annual Pickathon music festival for the first time.

Instantly, I was enthralled by the sweeping, golden-brown fields of a farm that isn’t used to grow much except for some grass for three rescue horses. The family who owns it rents out the land for a smattering of weddings but the main event is Pickathon, which draws a few thousand people the first weekend of every August.

Most music festivals have a core group of fans that talk about them like a religion and Pickathon has its ardent devotees. The festival’s eclectic music lineup, zero-waste ethos, bucolic setting with 40 acres of camping, and performance stages strewn across the property offer an experience that settles into the soul of attendees who talk about it all the time (just ask my coworkers).

Pickathon is also incredibly family friendly. Kids have the run of the place, and there are special events, musical performances and play spaces just for them. The first time I wrote about Pickathon, I wrote an essay mostly about how easy it is for parents to bring their kids. One year, I took photos exclusively of babies happily bopping to music with comically large noise-reducing headphones strapped to their ears.

I’ve been to Pickathon seven times since 2010. Since then, I moved to Portland, started working at KGW, got married at the farm where Pickathon happens (it’s really beautiful) and then last year, had a child.

Nell took everyone by surprise when she arrived unannounced on December 17, seven weeks early and weighing less than five pounds. She was strong from the start but instead of play dates and plane rides, her first few months were spent mostly holed up alone in our house, waiting out flu season.

Now she’s 7 months old and 15 pounds of spastic energy. So I decided to take a real baby to Pickathon and see just how easy it is to haul a new human to this music festival. I’d never done that before, but I thought, it will basically be the same experience but better, right?

If you have a kid, you probably know where this is going.

Heading to cover @pickathon for the day with a baby. By myself. This is what I plan to carry. This is going to be a mess, probably. Follow me for updates! #pickathon #momlife pic.twitter.com/dcwdQSIhW8

At 10:30, we finally left the house. Pickathon unfortunately does not have a service that gets you out the door without having to feed your baby, and change her, and feed her again, and change her again.

We got to the festival at 11 a.m. So far, so good. She didn’t seem too fazed by the crowds of people, and the weather was a glorious 70 degrees and overcast.

All checked in! Full disclosure: press this year gets to skip the long regular check-in line so the baby’s still happy. Now onto the main parking lot to load up my front and backpacks and try to catch @FrazeyFord on the WoodsStage. pic.twitter.com/2QwQxi6uBa

We checked in, got our wristbands, and headed to the main parking lot where I put Nell in a front-pack baby carrier, threw a backpack on, and felt the weight of what it would have been like to be pregnant on both sides of my body. Spoiler alert: It involves sweating.

Nell, however, was fine.

We walked into the festival grounds toward the Wood Stage, which is built out of tree limbs and sits in dappled sunlight in the middle of a wooded forest. One of my favorite artists, Frazey Ford, was playing for a few hundred people who were lounging on hay bales and standing on fragrant wood chips. Nell looked at me and smiled.

I strapped some bulbous baby headphones to Nell’s ears and bobbed a little to the music. I looked around, and dozens of other parents danced with their kids or held their babies. Soon, Nell closed her eyes and we swayed and let the music wash over us.

Made it to @FrazeyFord! Baby loves it so far pic.twitter.com/TrXHw8Tje2

I’m learning that having a child is a series of very quick, very intense moments. In that moment, I was elated. Maybe a little smug. I would regret this.

Twenty minutes later, she started to fuss a little and we headed over to the main stage, where festivalgoers can order food from a dozen or so food carts. I got some noodles, gave Nell a bottle, and we listened to a husband and wife duo called War and Treaty. I ate about a third of the noodles and then Nell leaned back, smeared her bottle on her face so it was streaked with milk, then launched forward and slapped my bowl of noodles, covering us both in peanut sauce.

Again, Pickathon does not have a service where it teaches you to be careful with your lunch, but a guy with his 5-month-old baby sitting next to me laughed and shrugged.

Update: the baby just spilled milk on her face and dumped my @pokpokpdx noodles all over both of us. She’s proud. #pickathon2018 pic.twitter.com/IEhUGBW5r5

After that, I strapped Nell back in the carrier and she fell asleep. For the next two hours, she slept on and off, waking up to look at me with mild disdain for not having a quiet crib with me, then falling asleep. I put her headphones back on, and her hat, and she tuned out the music while I checked out a couple more bands.

By 4:30 p.m. she was done. She looked at me and her face crumpled just as blues singer Charley Crockett took the stage. A baby next to us was dancing with gusto. His parents smiled and bounced him up and down. But my baby was ready to go.

Alright. This is the face of someone who’s done. We came, we partied, we’re missing all the awesome evening bands but all in all a success. #pickathon2018 pic.twitter.com/hmWslF38xI

As I walked back to the car with my front and back packs, past people streaming in for the weekend, I realized even though we only lasted half the day, we made it. Nell made it to Pickathon.

Like everything else in life, Pickathon is different with a baby. You can’t run around to every show and stay up until 2 a.m. You don’t look like a young Hollywood starlet at Coachella. You have to hang back, leave early, and look like someone who is attempting to hike the Pacific Crest Trail.

I’ll tell her about the way her eyes got wide when she first heard live music. And I’ll tell her how she fell asleep against my chest while we danced in the woods together in the afternoon.

Pickathon is still happening through August 5. You can buy day tickets or weekend passes at the festival, at Pendarvis Farm in Happy Valley. For more information, visit www.pickathon.com.