‘Help the birds social distance’: How you can help prevent a bird salmonella outbreak

Portland Audubon is seeing a high number of pine siskins with symptoms of salmonella. You can help curb an outbreak in local birds by practicing safe bird feeding. 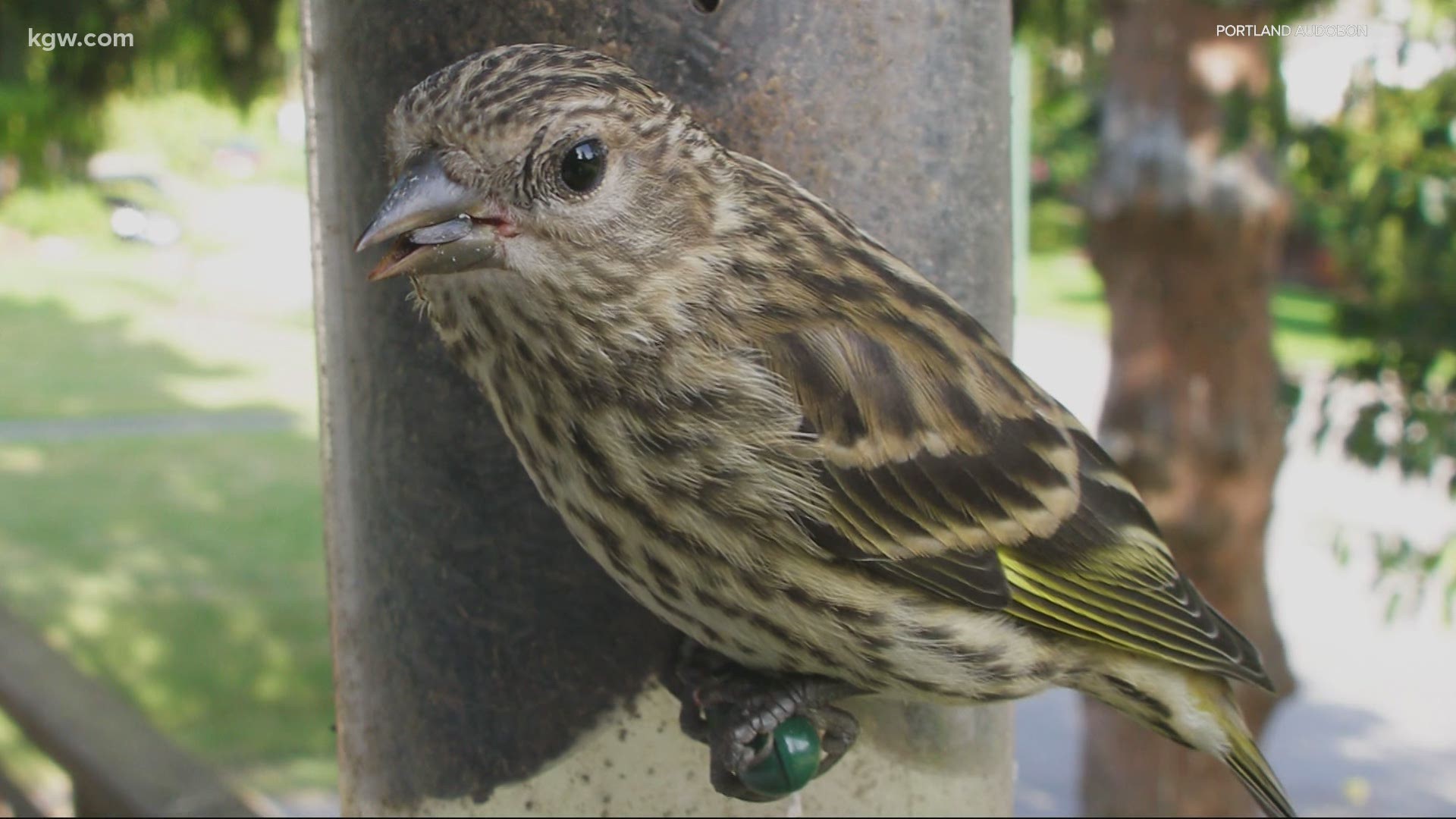 PORTLAND, Ore. — Backyard bird feeders have offered some peace and beauty in a year that’s been anything but. This year, pine siskins are everywhere and that includes our yards and feeders.

“They’re really common on bird feeders every year and this year it just seems like a lot of people are really noticing them a lot as we all stay home and pay attention to our bird feeders a little bit more,” said Portland Audubon Wildlife Care Center Manager Stephanie Herman.

Right now, these little birds need the public's help. The Portland Audubon is seeing a lot more pine siskins coming into their care this season with symptoms of salmonella.

“We are seeing increased admissions of pine siskins with symptoms consistent with what is salmonella, which is an illness that we see in these birds every year to some degree, but we’re seeing a lot more of it this year now, than, for example, this year at the same time,” Herman said. “So, we’re seeing a bit of an outbreak.”

Portland Audubon is awaiting lab results to confirm it is definitively salmonella, but Herman said their symptoms are consistent with salmonella.

The @PortlandAudubon is seeing an uptick in Pine Siskins coming into their care with symptoms of salmonella this season.
You can help curb an outbreak by practicing safe bird feeding. Tips on how you can help and what to look out for tonight on @KGWNews at 5. pic.twitter.com/JPt6TWKl1j

“It’s hard to say whether this is actually a bigger event this year than in previous years or not," Herman said. "In part because there’s some compounding factors. People are staying at home. There’s a lot more attention on the bird feeders."

Salmonella spreads easily between birds at feeders. Birds return to the same spot repeatedly, rather than moving about from food source to food source.

“When we, for example, keep inviting these birds to cluster at bird feeders and we’re creating this point source of high transmission you’re going to get more birds impacted in the long run,” Herman said.

The public can do their part to help curb an outbreak. The best way is to get ahead of it. Something we humans are learning more and more about as we deal with the COVID-19 pandemic.

“The best thing to do right now, if you are seeing ill birds at your bird feeder or your neighbors are, take your bird feeder down for a few weeks and that way you can help the birds social distance,” Herman said.

Keep an eye on the birds in your yard and neighborhood. Sick birds will appear fluffed up and lethargic. If you see sick or dead birds, take down your feeders for at least two weeks. Clean those feeders regularly with a 10 % bleach solution, rinse thoroughly, and dry before putting it back up and filling it.

Feeding more intermittently can also help. For example, every other day. There is plenty of food out there for birds. Birdfeeders are more supplemental, according to Portland Audubon Conservation Director Bob Sallinger.

For the urban farmers out there with chickens, Herman said it’s always a good idea to keep wild birds separate from domestic birds. However, the risk isn’t likely much higher than at any other time of year.

Finally, something we’re all hopefully getting better at in this pandemic, practice good hygiene when handling those feeders. Salmonella can spread to humans and pets.

“We always want people to be careful whether they’re handling birds or things birds touch,” Herman said. “They are wildlife and wildlife can carry diseases that can impact people.”

Be sure to keep your cats away from birds any time of year to reduce the risk of disease and to decrease the negative impact on native bird populations.

If you see sick or dead birds in your neighborhood, contact a local wildlife rehabilitator and bring them in, such as the Audubon Society of Portland. To learn more about the salmonella outbreak in local pine siskins and tips to help, click here.

This has been one of the busiest years ever for the Audubon Society of Portland. Herman said they’ve admitted more animals this year than any other. However, because of the pandemic, they’re working with a smaller staff. To learn more and donate, visit audubonportland.org.