Coyote hazing: What to do if you see a coyote

Make yourself seem bigger and be as loud as you can to "haze" a coyote. It's the best way to keep yourself -- and the coyote -- safe, according to the Portland Urban Coyote Project. 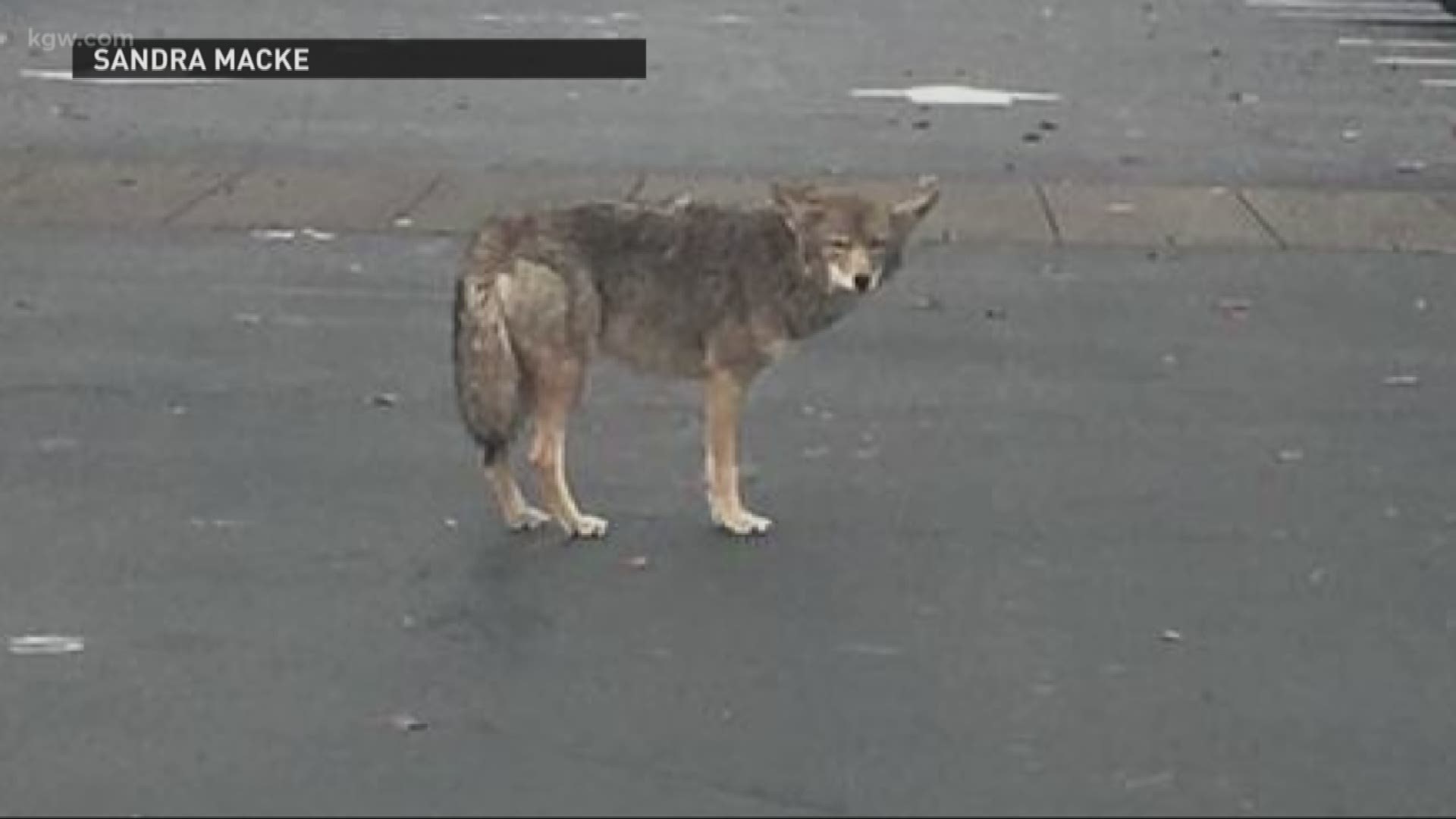 PORTLAND, Ore. — Do you know what to do if you see a coyote in your neighborhood? Coyote experts say "coyote hazing" is something you should do for the safety of yourself and the coyote.

Mimi Burns lives in Sellwood. She has spotted a coyote sitting in the middle of the baseball field in Sellwood Park. But before that she saw it roaming around on the sidewalk in front of her house in broad daylight.

“I was chasing it from about there and it came this way, and it wasn't, like, running away from me. It was sort of sauntering along, not very scared,” Burns explained.

The fact that the coyote was not scared is a problem.

“Typically, they want to stay away from people,” said Zuriel Van Belle, director of the Portland Urban Coyote Project.

But the one Burns saw didn't seem to care about nearby people in the park. Instead, she said, it moved into the field and sat down next to a tree where a mother and young child started to walk toward it.

“I thought, 'Why is that coyote sitting down there?'” Burns said. “Then I looked and I saw the little kid walking in front of his mother and then I thought, 'Oh my god, what if he tries to go after that kid?'”

Burns was able to get the mother’s attention before anything happened but said it was a scary moment.

“Coyotes are fast and they're cunning, and I think way smarter than most people think,” Burns said.

So, what should you do if you see one?

“The best thing to do is to just help sort of re-instill the natural fear that coyotes have of humans,” Van Belle said.

Doing that is called coyote hazing.

“Hazing: What you do is you make a lot of noise, you yell at them, you clap your hands really loudly,” Burns said.

Do not run away. Instead, make yourself seem bigger and make as much noise as possible. The Portland Urban Coyote Project suggests clapping, yelling, using an air horn, or making a noise shaker with rocks and an old coffee can.

“It was very nerve-racking,” Burns said. “I was a little scared, but I thought, 'OK, I'm doing the right thing. This coyote needs to understand not to be in this park.'”

Hazing a coyote may feel a little strange, but experts say it is the best thing you can do for the safety of yourself and the coyote.

“Hazing coyotes is so important because they are a member of the same family that dogs are a member of, and they learn well and quickly, so if they learn to be close to humans, that just puts them in proximity to humans more often and that's where accidents can happen,” Van Belle said.

Coyotes often come into neighborhoods because it is easy for them to find food, like left out garbage, compost piles or pet food. Making sure those items are not options helps keep coyotes away.

Portland Urban Coyote Project tracks coyote sightings in Portland, and they've created an online map that details where coyotes have been spotted.

Van Belle said Portland isn't necessarily seeing more coyotes, but they're being noticed more. She said they often see a spike in coyote sightings after one person spots one, because then other people start paying closer attention.

Visit the Portland Urban Coyote Project’s website to learn more about coyotes in Portland or to report a coyote sighting.