The amazing journey of Deshaun Watson

For Deshaun Watson, the NFL Draft was a family affair and a full-circle moment after a life full of adversity. 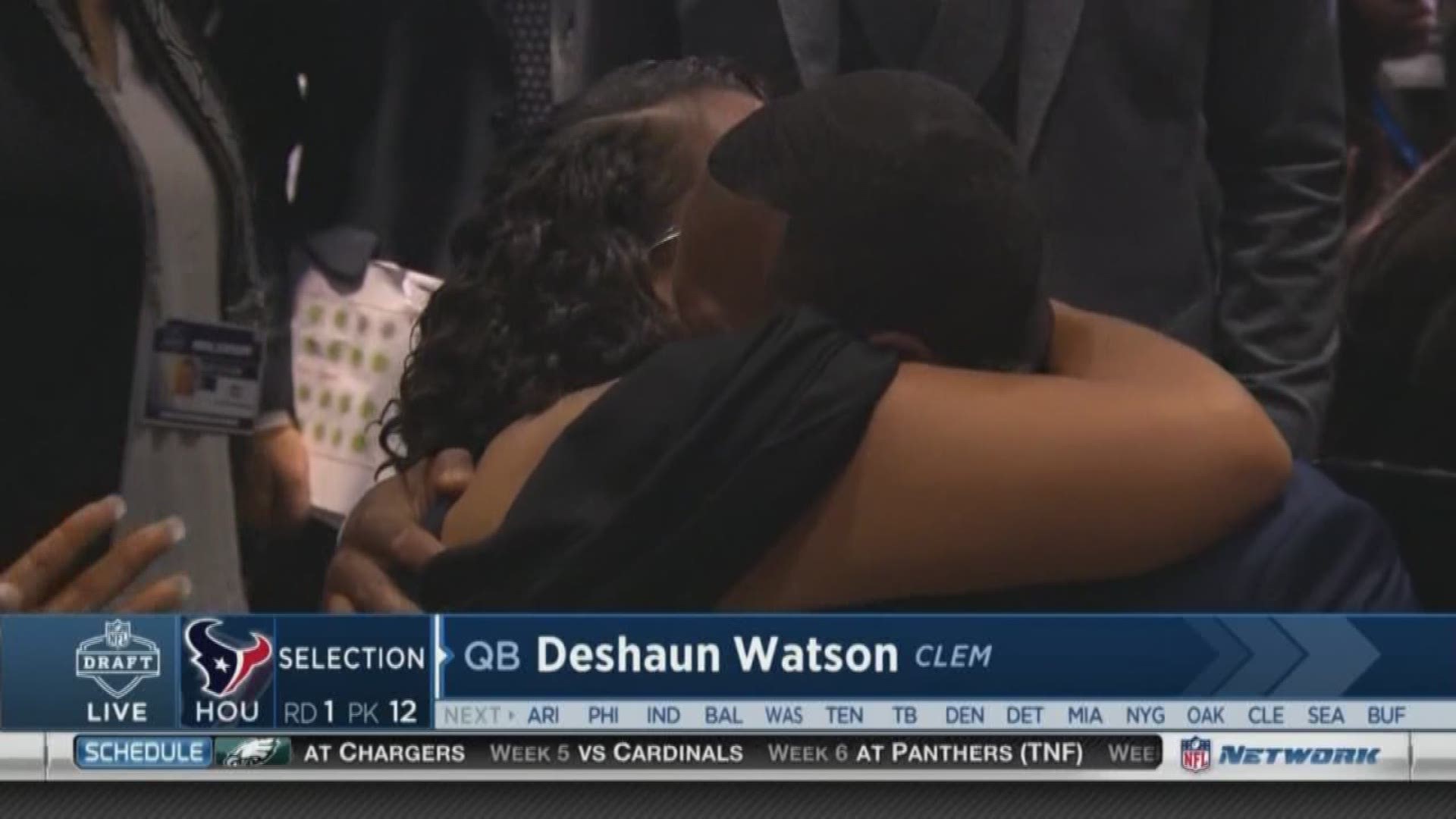 For Deshaun Watson, the NFL Draft was a full-circle moment after a life full of adversity.

The Houston Texans first-round pick was surrounded by his proud mom, siblings, an aunt, uncle and cousin in Philadelphia Thursday night.

It was his mom’s loving words that had the Heisman finalist choking back tears as he read her letter on camera.

Photos: Texans trade up to get QB Deshaun Watson

1 / 20
Apr 27, 2017; Philadelphia, PA, USA; Deshaun Watson (Clemson) poses with NFL commissioner Roger Goodell (right) as he is selected as the number 12 overall pick to the Houston Texans in the first round the 2017 NFL Draft at the Philadelphia Museum of Art. Mandatory Credit: Bill Streicher-USA TODAY Sports

"Deshaun. When you came into this world, you brought a love to my heart that I had never appreciated. I watched you play your first flag football game all the way to the last college game. To be here at the NFL Draft and see you walk across the stage, it's a dream come true. I'm so proud of you, I'm so proud of the person and the man you became. Making it to the NFL is an accomplishment that you made come true.  That being said, so much joy to my heart. I wish you love, happiness, and longtime success. As I look back, we was not supposed to be here. In the words of Drake, 'We made it… Love, Mom."

“Love you mama,” a tearful Watson replied. “We made it.”

The Watsons have an inspiring made-for-Hollywood back story.

Deann was pregnant with twins when she enrolled in a technical school to find a way to support Deshaun, his older brother Derrick and the babies on the way.

Despite holding down a full-time job while raising four little ones, the single mom couldn’t afford to move them out of government housing in Gainesville, Georgia.

Deshaun, determined not to forget where he came from, has the old address –815 – tattooed on both arms. He also wrote it in on his wristbands before every game as a Clemson Tiger and even had it sewn into the blazer he wore to the draft.

Things turned around for the family when Deshaun was 11. He brought home a flyer about Habitat for Humanity and his mom signed up. In 2006, it was former NFL player Warrick Dunn who handed over the keys to their new Habitat home.

But there would be tough times ahead for the Watson family. Deann was diagnosed with late-stage tongue cancer when Deshaun was a sophomore in high school. He and Derrick took on more responsibility, while an aunt and uncle stepped up to help care for the four kids while mom traveled nearly an hour for her treatments.

Deann had to learn to talk again after surgeons were forced to remove her tongue. But she survived.

Fast forward to 2017: Deshaun has a street named after him back in Gainesville; he’s a passionate advocate for Habitat for Humanity; and the whole family will celebrate Deann’s birthday this weekend.

With a big fat Texans paycheck in his future, it’s now Deshaun’s turn to spoil her.

“That’s one of the biggest things that I’m looking forward to is being able to take care of my family, take care of my mom, make sure that she’s settled and that whatever she needs she can get, just kind of enjoying life and let her travel around,” Watson told the Charlotte Observer before the draft.

Thank you, @HoustonTexans. Blessed and ready to get to work. Loving this #NFLDraft #PaniniInstant card, go get https://t.co/63XlY6E7VO pic.twitter.com/twjq4lceHX

Incredible moment.@DeshaunWatson4 is brought to tears as he reads a letter from his mom. #NFLDraft pic.twitter.com/8Z0QMTfuxT