Don't ask why a Sasquatch is starring in a new crosswalk safety PSA. Ask why not? PORTLAND, Ore. -- Don't ask why a Sasquatch is starring in a new crosswalk safety PSA. Ask why not?

“Aside from the fur, the grunting and groaning, he's a normal person,” said Portland actor Ira Kortum, who plays Sasquatch. “Like anyone else, he appreciates safety!”

“We glue it to his face so that when he acts he can emote,” said Christina.

The Kortums' version of Sasquatch first appeared on Cousins Subs commercials, where they’re a big hit in the Midwest. Metro and the Oregon Department of Transportation thought the character would be a perfect fit for the Oregonian Crossing video.

While acting in the suit may be a lot of fun, it definitely takes a toll on Ira.

“I've been near fainting in the 'Squatch suit," he said about donning the heavy, hot costume. “But at the end of the day I still don’t want to take it off.” 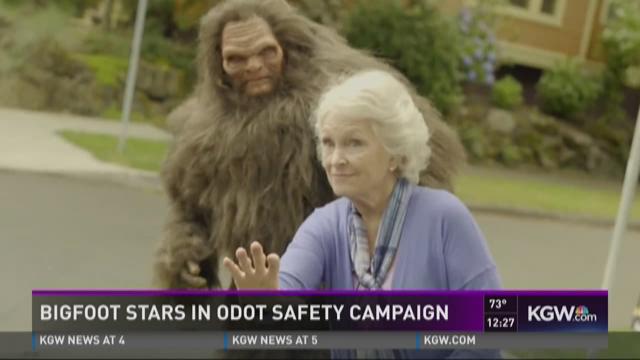 When Christina isn’t working on Sasquatch ventures, she works on several film and TV sets for shows including Grimm and Portlandia. There, she applies special effects prosthetics supplied by B2FX onto the actors.

This fall, Christina will be working on the upcoming movie, Lean on Pete, which will be shot and set in Portland.

As for Ira, don’t put him in a Yeti-shaped box. A classically trained actor, he’ll be performing the title role in MacBeth, this fall at Hart Theater in Hillsboro.