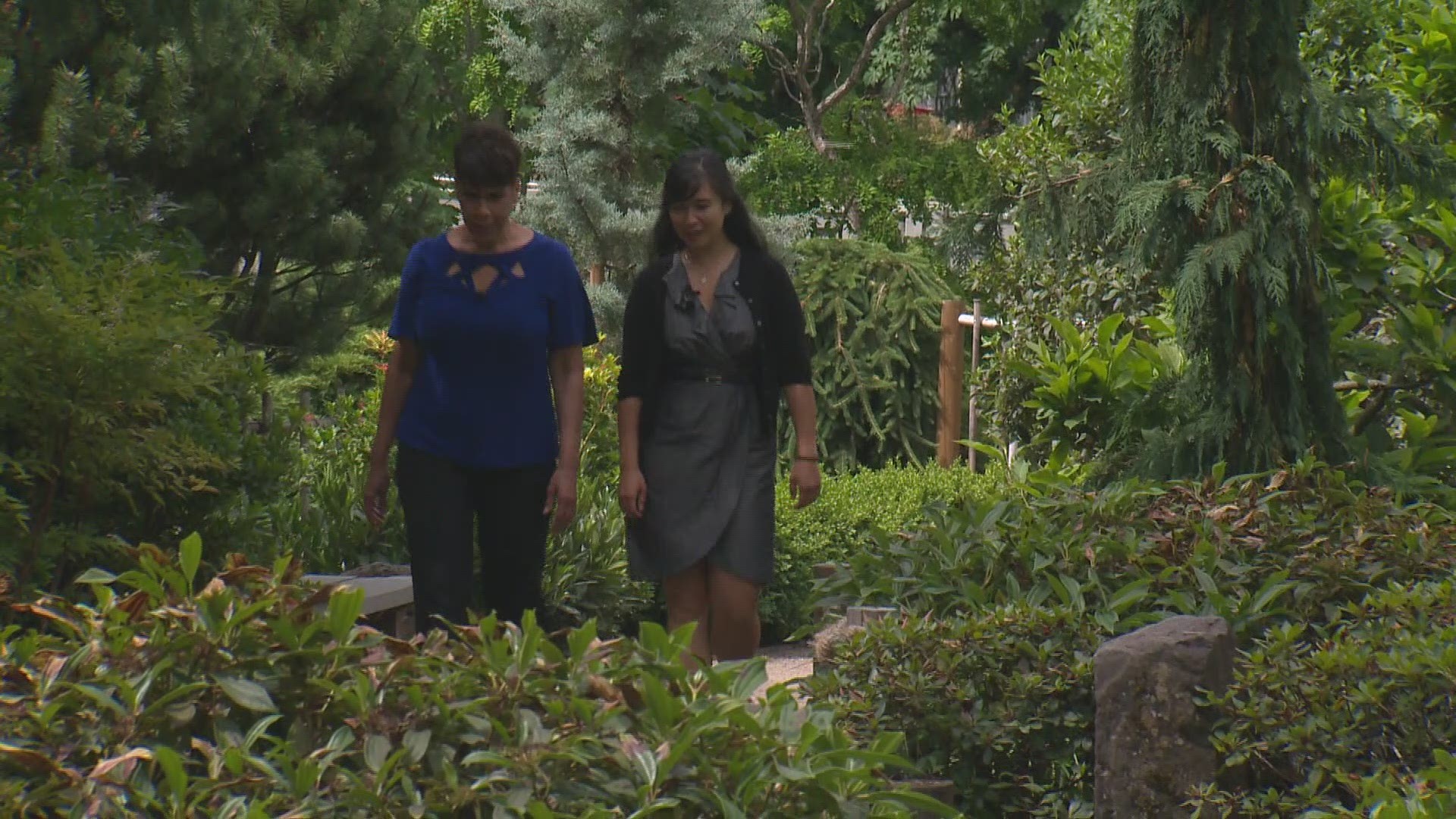 PORTLAND, Ore. — During the Summer Olympics in Tokyo, KGW is exploring the connections between the Northwest and Japan, talking to Japanese American people in Portland about their lived experiences here.

The series is called "Our Shared Journey."

30-year-old Sachi Kaneko is a Portland activist. She identifies as queer and biracial. She said her peers in the Japanese American community are becoming more diverse —racially and socially— and she's an example of that.

Kaneko isn't shy about breaking with tradition. She's a deep thinker with an easy laugh but she's serious about her activism.

"Oh, I have to be outspoken about this stuff," she said. "Not for me. I would prefer maybe not to be on television or like tell everyone things about my personal life, but because I think people need to see that there are people different from them and they still deserve equal rights as a human being."

RELATED: What We Share: One woman's journey from Japan to the Pacific Northwest

"The first time I really started thinking about race and realizing I was a little bit different— I was really young," she remembered. She wasn't exactly sure where she fit in— the daughter of a Jewish mother and a Japanese American father.

"I think a lot of biracial children have the experience where it brings two different cultures together, but on my mother's side—sort of the Russian Jewish side—my grandfather didn't really like Asian people. So, I grew up knowing he would make comments about my dad like Chinese laundry jokes and things like that. [My grandfather] was never very involved in my life. As a young child I thought that was because I was Asian. It was very confusing."

Before Kaneko claimed her Japanese heritage, she rebelled against it.

"There's these Japanese words like 'gamansuru,' which is to persevere. It's kind of this strict [idea] like 'it cannot be helped.' I didn't want to live under these things. I saw my friends who were not Japanese American and felt like, 'Oh, they don't have to deal with this.' They don't feel this pressure to go live in Japan and reconnect parts of their family. And I wanted that. It seemed easier," she admitted.

"I remember hearing, 'Well, this is what they do in Japan.' I was like, 'Well, I am not Japanese. I am an American and I'm gonna do it the way I want it. And if they didn't want me to do that— 'they' being my ancestors— then they shouldn't have emigrated to the U.S.," she said chuckling at her own petulance. "That was my whole spiel. And as I got older, I realized it was something I couldn't change about myself."

Kaneko said she had to accept her own cultural history before she could help others. She quotes the indigenous activist Lilla Watson to make her point, "If you have come here to help me, you are wasting my time. But if you have come here because your liberation is bound up in mine, then let us work together."

"It's not just about me or you," Kaneko emphasized. "This is a joint effort. We're all in these systems of racism, or homophobia, or sexism. How do we dismantle them together?"

One particular book was Kaneko's "aha" moment years ago. "I read Toni Morrison's The Bluest Eye, which was the first book I really related to," she said.

The book was on every bestseller list. It tells the story of a girl, and the damage internalized racism can do. Kaneko identified. Then she realized it wasn't just her and her family. It was systemic.

"It made me curious about the history of African Americans in this country and also kind of tied in my own family's experience with the Japanese concentration camps* in the U.S. and on my mother's side experiencing anti-Semitism. It made me understand these things as systems rather than singular, isolated events that were unrelated."

Kaneko admits it took a while to solidify her place in the world as a person of color.

"As an Asian American there's this model minority myth and you hear a lot, 'but you're Asian so it's not like you really experience this stuff. You don't really experience race in the same way' or 'you're practically white.'

But once she embraced her heritage, she said she felt comfortable joining the realm of activism and advancing causes she cares about like Black Lives Matter and reparations for slavery.

She also works with the Japanese American Citizens League (JACL). It's the oldest and largest Asian American Civil Liberties group in the U.S. As one of the Portland chapter's youngest Board members, Kaneko isn't afraid to push the envelope. "We're expanding, I think, beyond racial equity into gender discrimination, or I want to. I would like to see more involvement around queer communities," she said.

Kaneko has participated in and spoken at social justice rallies and protests. She believes they're an important way to affect social change but much of her activism involves internal work. "Looking at the way I've perpetuated things, where I've made mistakes, or I've said the wrong thing. And having to apologize or to look back and self-reflect and be like, 'That's not how I want to show up in the world.' And knowing I'm gonna make a mistake going into it. It's scary. It's really scary and it's also one of the most rewarding parts about being an activist."

She hopes that is the legacy of her generation.

"It helps me feel positive about the world around me because I know intimately that there are people giving up their time, their energy for helping others. And it's inspiring. It's beautiful."

And it's our shared journey.

*Editors note: If you're unfamiliar with hearing the term "concentration camp" to describe Japanese internment during World War Two, here's some context.

"Language matters: There is no universal agreement on what we call the camps or the process that created them--'incarceration,' internment,' 'concentration' are a few of the terms that were interchangeably used. While some might find 'concentration' misleading because these were not extermination camps, the term predates the Holocaust and is by definition a place where large numbers of people are detained or confined under armed guard. We believe that awareness of the historical import of these words, as well as care in using them, is an important way to respect the collective memory of the victims and grants us power to confront injustice and cultivate peace. A concentration camp is a place where people are imprisoned, not because of the crimes they committed, but simply because of who they are. During World War II, America's concentration camps were clearly distinguishable from Nazi Germany's. Despite the difference, all have one thing in common: that people in power removed a minority group from the general population and the rest of society let it happen."

RELATED: Olympics highlight what the Pacific Northwest shares with the communities of Japan