What We Share: One woman's journey from Japan to the Pacific Northwest

Gloria Smith's quest to find her father after World War II led her to Portland and the fulfillment of a life-long dream. 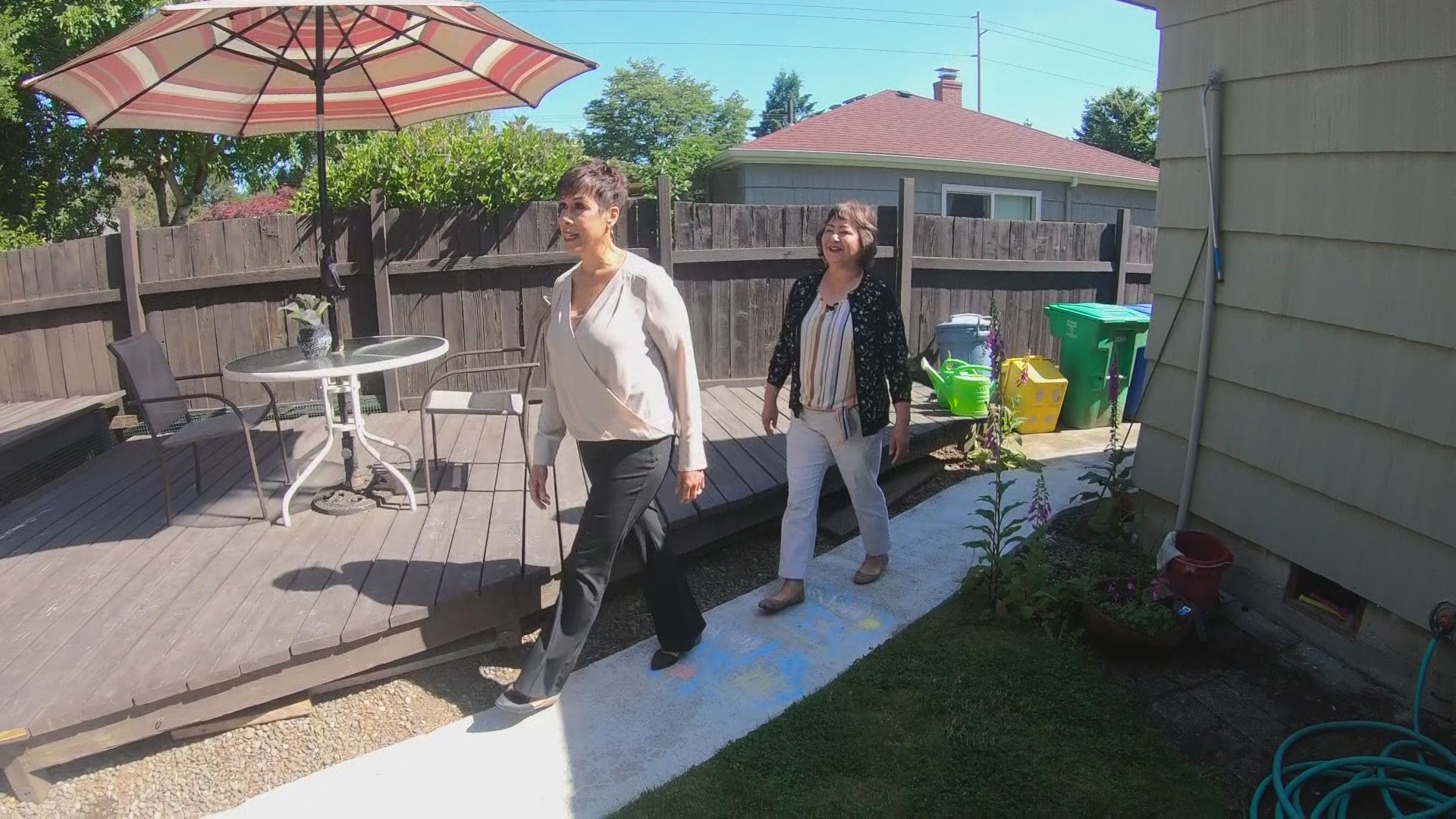 PORTLAND, Ore. —
During the Olympics, KGW News at Sunrise is broadcasting live from the Portland Japanese Garden. The team chose that location because it symbolizes the Pacific Northwest's connection to the people of Japan and to Japanese-Americans living here.

The Sunrise team has talked about how the two nations, Japan and the United States, forged a new relationship after World War II and how Oregon was instrumental is promoting cross-cultural understanding.

Sunrise is also airing a series of personal profiles called "What We Share," where Japanese Americans talk about their experiences. People like Gloria Smith, who lives in the Woodstock neighborhood of Southeast Portland.

Credit: KGW
Gloria Smith talks to KGW from her home in Southeast Portland.

Her home is cozy; her backyard garden filled with veggies and herbs. It's a world away from the beaches she remembers as a teenager in Osaka, a large port city on the Japanese island of Honshu.

She remembers when she was a little kid with a big dream.

"I stand out by the beach and say 'I know all the way out there is America. I'm going there someday.'"

On that beach, she felt the pull of America within her. Her father and mother met in Osaka around 1945 after the war. Her father was an American soldier.

Smith was born in 1950 and her story is like thousands of others. According to estimates, between 1945 and 1952, American servicemen in Japan fathered close to 10,000 children.

But the Japanese Welfare Ministry put the official number much lower. Historians believe that's because the children were mixed race and shunned by the community. Often, they weren't counted or they were placed in orphanages. The U.S. military's policy about "occupation babies" was they were not their concern.

Smith said because of that, she had a very difficult childhood.

"You know, kids tease you because you look different. I knew that wasn't a good thing. They are talking bad about my mother having a child with American soldier."

Many relationships between the young Americans and the young Japanese women were long-lasting. Smith's parents were together five years; but soon after she was born her dad re-deployed to Korea leaving Smith and her mother behind.

"The only thing we had was his dog tag," she remembers. That little piece of metal was engraved with an address in the United States.

"That permanent address was my grandmother's address," Smith said.

That address would prove to be Smith’s path back to her father. But it would take years.

"I'm very tenacious. I wanted to find out either my father is dead or alive, so I just keep sending same letter to grandmother's house hoping that somebody will answer me, you know?"

When Smith described herself as tenacious, she wasn't kidding. She  said she sent a letter to her grandmother's address--- the same letter--- every month, for two years.

"And a couple years later my father got that letter and he sent me a letter first time in my life. I was 15."

The teenage Gloria, still in Japan, had re-connected with her father. And they kept in touch.

"I cannot describe with the words how I felt."

At age 22, Smith boarded a flight from Osaka to Portland to meet her dad for the first time, face-to-face.

"Such an emotion. We both cry. My father is Spanish. He's very emotional person so, he cried.. and I cried," Smith chuckled. " All happy tears."

And the girl, born in a nation across an ocean, started her journey to becoming an American.

Smith said she became a US citizen in the 1990s. She not only started a new life in Portland, she started a family. And she's come full circle after being shamed as a mixed-race child. Now, she's celebrating her multi-cultural kids and grandkids. The younger ones all call her 'baba'-- the Japanese nickname for grandmother.

"I feel such an honor to have them," Gloria said and she ticks off the diversity among their ranks. "African-American, White, Japanese, Spanish. I want all the people that ever say that to me, ‘You cannot do this’— to watch."

She’s talking about the people who doubted her growing up in Osaka after World War II. Many shunned her for being mixed race. But today there’s no shame.

"I definitely still do feel the parallels of not really fitting in," Maia said. While she said she's always felt secure being Black, as she got older and tried to resonate with her Asian identity, she said she started to see herself "not being added into the conversation because people don't see me as Asian."

But it was never that way at home and Maia got emotional as she talked about her grandmother's triumph over struggle.

There's something else Smith likes to do for everyone— cook.

"So, she's like the Grandma that likes to feed her grandchildren.... Aren't you Baba?" he laughed.

This family bonds over food and laughter.

"I wish my life was going to be wonderful but I never imagined, you know, what I have after 49 years of living here. No. I could not," Smith marveled.

From generation to generation, this family is passing down what matters most: love.

It's our shared journey.