A conversation with 'The Virus Hunter' Dr. Ken Stedman

A biology professor at Portland State University, Dr. Ken Stedman, discusses reopening Oregon and what needs to happen in order for it to be successful. 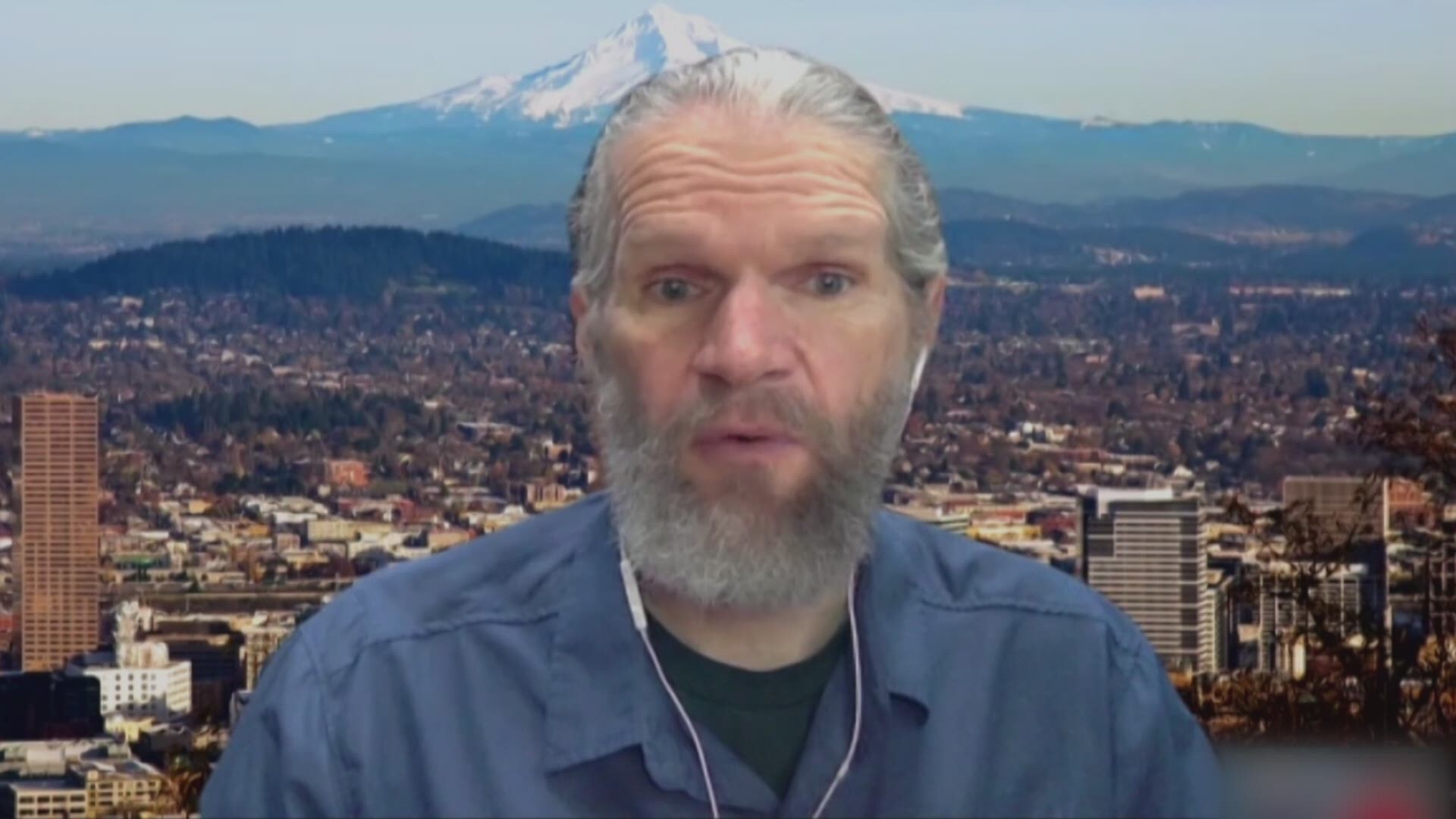 PORTLAND, Ore. — If you haven't heard of the COVID Council yet, you will. It's working to help Oregon navigate the myriad challenges of this pandemic.

The COVID Council is a group of experts from PSU and OHSU. The state epidemiologist, Dr. Dean Sidelinger, even sits on the panel and he's one of the health advisers who has the Governor's ear.

Recently, I spoke with one of the more colorful council members: "The Virus Hunter" a.k.a. Dr. Ken Stedman, Professor of Biology at Portland State University in the Center for Life in Extreme Environments.

Here's how he describes its mission, "To try and think about the big questions and the big problems that we're going to have to solve in Oregon in the immediate future and also longer term. How are we all going to recover from this particular situation?"

Dr. Stedman says two things are critical to get through this successfully:

"Listen to the scientists. And test. Listen to the real experts. People who know a lot of about coronavirus and know a lot about public health. And for that matter the sociologists and the psychologists-- the people who also think about how we as a society are responding to this disease." He goes on to say, "We've done such a good job of physical distancing that we've had very few cases in Oregon. That is absolutely wonderful but we need to continue to do that and listen to the experts."

As Oregon begins to slowly reopen, I asked the "Virus Hunter" if he expects to see more infections.

"I hate to be a broken record here, but testing, testing, testing. When there are more outbreaks-- and there will be-- the important thing is to make sure we have the testing."

Stedman says the key for public policy makers is knowing the numbers of people who have the disease. That way they can make informed decisions about opening the economy or shutting parts down again.

During our interview, we talked about a wide range of things-- including face masks. We've been told to wear them in public, but if they don't protect us from getting the virus, how exactly do they stop us from spreading the virus? Dr. Stedman told me the point of a mask is to block droplets coming straight out of your mouth and nose and landing on the person you're talking to. If you're wearing a mask, the airflow is going to change.

He illustrates the point this way: "When I wear a mask and my sunglasses fog up. That's because the air is going in a different direction. So it's not going straight at (whomever) you're talking to. If there are any big droplets which are potentially going to be carrying virus particles, those will actually be blocked by the mask. This is why if you're wearing a mask when you're going out and then you come back home, you really want to wash that mask before it gets used again."

Immunity is another hot topic. When will those who've recovered from COVID-19 know if they're safe from getting infected again? "The short answer is it's going to be a while," said Stedman.

"The only way we're going to know how long it lasts in humans is to see what happens a year from now, two years from now. That being said, there actually have been lots of tests-- some of that work is being done at OHSU-- looking at the antibodies that people who have COVID-19 have been producing. And those antibodies, at least in a test tube with controlled environments, seem to be pretty protective. We really don't know what that means in terms of the actual people but certainly the data right now look very promising in terms of at least having some kind of protection. We're not going to know until more people get exposed."

The game changer will be a vaccine and research is moving fast. The "Virus Hunter" says he's very interested in that topic. He lectures on vaccines during his classes at PSU and even has a small company that works on vaccine stabilization. "The whole idea of a year to 18 months is completely mind blowing. I think the absolute speed record so far for a vaccine has been four years. Most take 10, some take 20 or more years. So the thought that we might have a vaccine by early next year is absolutely incredible."

This is interesting, too. "I think we're going to have multiple vaccines and probably what's going to happen is there'll be some that end up being better-- or worse--- hopefully better and increasingly better. But I think that's part of the process that we do have to bear in mind. It's not going to be the vaccine. I think there will be a vaccine. And then there will be more vaccines, not unlike flu."

And what about coronavirus symptoms? The CDC recently expanded the list. We've read about such diverse issues as cough and fever to sore throat and even diarrhea. Are the symptoms multiplying?

"I wouldn't say that symptoms are multiplying," cautioned Stedman. "I would say that the numbers of people who are getting the disease has been multiplying.

"And all of us are different. The way that you would respond to a virus infection is going to be different than the way I will respond to a virus infection. We've got more people who are being infected by the disease. And so we're going to see more kinds of symptoms. I'm pretty confident that the vast majority of people who have COVID are going to have a cough and a fever. It's some of the minority of people who will have some of these different kinds of symptoms."

What about the origins of COVID 19? Dr. Stedman told me back in March during our very first interview there was evidence it came from bats. Now some suggest it came from a lab in Wuhan, China. Here he is wading into that debate. "The evidence so far is extremely strong that this is a naturally occurring virus. That it was not engineered. A lot of the discussion is that maybe it was in a lab in Wuhan and somehow escaped. I think that there is no evidence for that right now. You can't completely exclude that, but there's much better evidence that it came directly from an animal source."

So is there anything that surprises the "Virus Hunter" about COVID-19?

"Unfortunately, the thing that really caught my attention is the unpreparedness of the Western world for this particular disease. And even for that matter from China, as well. Not being prepared for these kinds of diseases coming out of animal sources and then spreading widely in the population. I'm really disappointed and surprised that we didn't have a better response earlier."

RELATED: Dating at a Distance: How coronavirus is changing the way we look for love

RELATED: Isolating Together: Having hard conversations without starting a fight