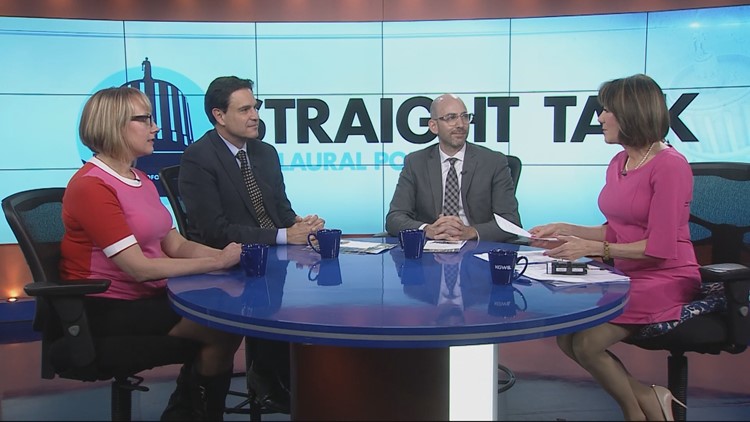 Despite record income growth, many in Portland still struggle with housing affordability

PORTLAND, Ore. — Concerns over the coronavirus have cast a pall over the region's economic future.

The full economic impact of COVID-19 is still unknown, but the executive director of the Portland Business Alliance, Andrew Hoan, said it's already had significant impact on the traded sector, the hospitality industry, and everything in between. Those ominous headwinds come at a time the region has been surging economically.

Hoan said the Portland metro area has been in uncharted waters with an 11-year economic expansion, the longest in history. But no one knows what lies ahead.

Hoan was a recent guest on KGW's current affairs show "Straight Talk."
He was joined by guests, EcoNorthwest president John Tapogna, and CEO of DHM research, Michelle Neiss, to discuss the Value of Jobs report, an annual update on the economy.

What follows is a look in the rear-view mirror  and the biggest challenges ahead as measured before the coronavirus outbreak.

The region had been riding an economic wave of unprecedented proportion.
John Tapogna  said nationally and regionally, it's been the longest expansion ever.

"You can go back to the Franklin Pierce administration (1853-1857) and not find anything longer. Portland and Oregon tend to do well in expansions. We do well when things are good. And we tend to contract hard when things are not good," he said.

"This shows we're an economic heavyweight by any measure, outdoing our peer cities across the nation," Hoan said.

Portland's median household income (MHI) had the largest increase of any top 100 metro city jumping from a 26th ranking in 2010 to 13th in 2018. That put Portland on par with Austin and Salt Lake City. Hoan pointed out Forbes named Portland the 5th-best place to do business.

While there was a lot to celebrate, not everyone has been sharing in the economic good news.

DHM Research conducted a poll to better understand the attitudes of voters about their key concerns, jobs, and the economy. The survey found not everybody is benefiting. In fact, one in four said they were worse off than they were two years ago.

And communities of color have not shared equally in the economic growth.
There is still a $35,000 (MHI) income gap between African American and Latinx households, and white households.

"What's interesting is even with this economic expansion, there's softness in how people feel about it. A hesitancy in their feelings about their own personal economic situation," Michelle Neiss said.

Nearly half, 46%, of all renter households in the region are cost-burdened, meaning they're, spending more than 30% of their income on housing. And wages have not kept up with the rising cost of rent.

John Tapogna said that's due in large part to the fact the region hasn't kept up with building enough housing to meet the demand.

"Between 2010 and 2018, we built 8.5 housing units per every 10 households created. That's people moving in, young people moving out of their parents' homes into their own places," he said.

The Value of Jobs report also emphasizes the link between the lack of affordable housing and the region's homelessness crisis.

Tapogna pointed out there are 56,000 people in the metro region who are severely cost-burdened. That means they pay more than half of the gross income to rent or mortgage. He said they could be one accident, medical emergency, or job loss away from homelessness.

Homelessness has become a top concern for a lot of citizens. The DHM survey found 43% of Portlanders said it was their number one concern.

"If you go back five or six years, homelessness was mentioned in our polls by 3 to 5% of people. It wasn't on the horizon as a huge issue. Now, it's skyrocketed. That tells me there's a sense of urgency from the public looking for solutions, wanting something to get done," she said.

On Straight Talk, guests talked about possible solutions and the Portland Business Alliance's endorsement of the Metro measure that will appear on the May ballot. If approved, it would raise $250 million for homelessness services.

Hoan said the housing affordability issue should be the top issue for every elected official.

"As rents go up, there goes the increase in homelessness. It's a crisis. This is an all hands on deck requirement for our elected officials," he said.

Hoan said in light of the declared pandemic health crisis, future policy work to stimulate a now fragile economy will be needed to help secure a bright future for our region and state.