Amid protests and pandemic, Mayor Wheeler says Portland is in ‘transformational period in history’

Wheeler joined host Laural Porter on this week's episode of KGW's Straight Talk to discuss the ongoing protests, the pandemic and his reelection campaign. 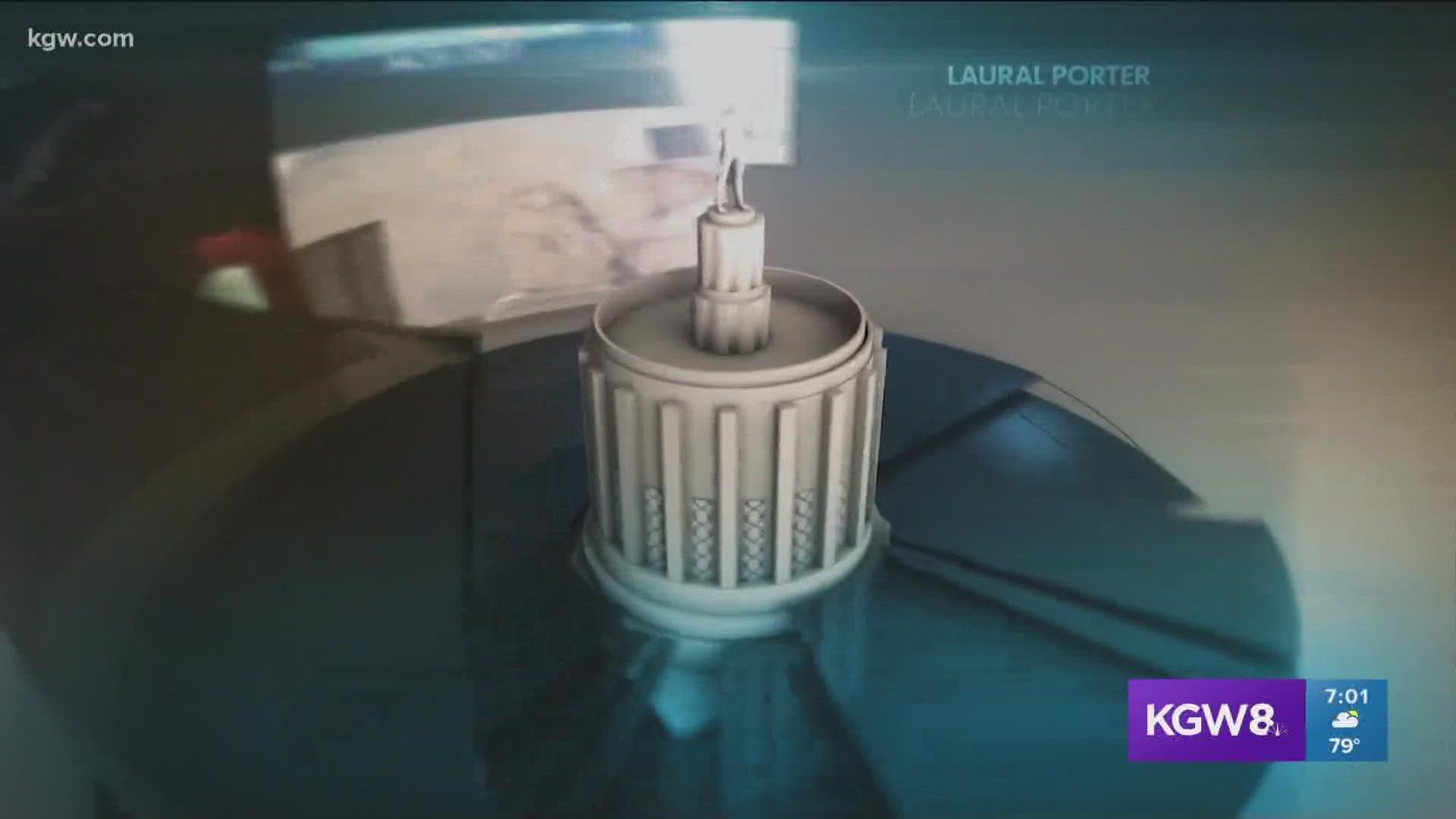 PORTLAND, Ore. — Portland Mayor Ted Wheeler was once overheard saying he couldn't wait for the next 24 months to be over, and the end of his first term as mayor. That was in November 2018 after a health coalition forum where he was heckled.

Fast forward to today and being disrupted during a speech seems minor. Wheeler faces a global pandemic, an economic crisis rivaled only by the Great Depression, and nightly civil unrest on the streets following the killing of George Floyd. But now, he said he has no doubt he wants to be Portland's mayor for another four years.

Wheeler joined host Laural Porter on this week's episode of KGW's Straight Talk. He acknowledged the myriad of challenges facing the city, but called it a transformational period in history.

"We have an opportunity as a community and as individuals to write that history that decades from now, people will look back on as being a really important inflection period in our city and nation's history," he said.

Deal for federal officers to withdraw from Portland

Wheeler said the first step in moving the city forward is for federal officers to leave Portland. He applauded Gov. Kate Brown for her work in reaching an agreement with Vice President Mike Pence for the phased in withdrawal of federal agents. Under the deal, Oregon State Police will replace the federal officers in protecting federal property. Wheeler called that a necessary beginning.

"There's no question since they arrived they've escalated an already tense situation," he said. "They've brought thousands of people back to the streets. They've re-energized those who are demonstrating, and frankly, it's led to that handful of people who are engaged in violence and vandalism to become more intent," he said.

However, he acknowledged, the departure of federal agents isn't likely to end nightly protests.

"The de-escalation is going to have to be community-wide and requires community engagement, but the first ingredient is getting the federal officers out of our city," Wheeler said.

RELATED: Calm night of protests in Portland after Oregon State Police step in for federal officers

One of the demands some protesters have made is for the city to cut the Portland Police Bureau budget by 50%.

In response, Wheeler said he doesn't believe in arbitrary budgetary reductions. He said he does believe what they're asking for is to de-emphasize the practice of policing and to re-emphasize investments in the community. He said the city has already taken steps in that direction.

"We've redirected funding out of the police bureau, we've eliminated police from schools which was a key demand of demonstrators, we've eliminated units that had disproportional impact on people of color," he said.

He also pointed to the unanimous city council decision to refer to voters a ballot measure for a new independent police oversight system enshrined in the city charter. The measure is sponsored by Commissioner Jo Ann Hardesty.

Wheeler said there a lot of challenges still to be addressed with the measure, but that each of the council members believes it's a risk worth taking.

What will bring protests to an end?

Wheeler said he believes the protests will end when demonstrators see elected leaders at all levels of government, both nationally and locally, have heard and understand their demands, and that they are taking concrete action towards those demands.

"In the city of Portland, we are already doing that and will continue to push forward," he said.

On July 22, after eight weeks of nightly protests, Wheeler waded into the crowd of protesters downtown.

He faced a barrage of jeers, heckling, and chants, some calling him by the nickname they'd given him, "Tear Gas Teddy." It was a tense scene, but Wheeler said he didn't take it personally. He said as police commissioner, and as a middle-aged white man, he represents the status quo.

"I didn't go down there expecting people to congratulate me and pat me on the back," he said. "I went down there to listen to what people had to say. I believe they needed to confront their government directly and I represent that. I'm the face of government."

The Mayor was at the fence line at the federal courthouse when federal agents deployed tear gas.

He has called it an uncomfortable experience and apologized for the times early in the protests that Portland police deployed tear gas, in his opinion, indiscriminately.

"I am the police commissioner. That accountability rests with me. I took the steps to make sure it wouldn't happen again. CS gas has only been used twice this month as a result of the directive I put in place in very limited circumstances," he said.

At a meeting this week with Gov. Brown, Commissioner Hardesty, Oregon State Police and Portland Police Chief Chuck Lovell, Wheeler said they agreed the standard going forward should be no use of CS gas, unless there is a serious threat to somebody's physical health or the threat of them being killed. He called it a consensus agreement.

A number of downtown Portland businesses have told KGW the pandemic and protests have hurt their business to the extent they aren't sure they'll survive. Some have said they may leave when their lease is up.

Wheeler said he and the city, along with the business community, are working on a plan to help revitalize and clean up downtown. He said the first step is to stop the nightly demonstrations downtown, especially the small group engaged in violence and vandalism. He also said the city needs to encourage people to come back downtown.

"The violence, the vandalism is in a very narrow area in the central core. But the perception that's been created is that all of the city of Portland is in chaos. It's just simply not true," Wheeler said. "But we've got to make that extra step, so that businesses and their employees feel safe and welcome downtown and their customers return to downtown Portland."

He said he was committed to make that happen.

Mayor Wheeler admitted there have been some rocky moments between him and Commissioner Hardesty.

Mayor @tedwheeler, I've had enough. If you can't control the police, give me the Portland Police Bureau. Full Statement below. pic.twitter.com/Xq4dkV2Tdr

It came the morning after Portland police had worked together with federal officers to aggressively disperse protesters. Wheeler said he was upset and felt she had undercut his credibility at a difficult time.

"It was at the same time President Trump was attacking me, the city of Portland, and other Democratic mayors across the U.S. This is a time when we need the city council to be unified," he said.

However, since then, Wheeler said they have had constructive conversations.

"As far as I'm concerned, we are on good, stable ground. We are going to disagree from time to time. Commissioner Hardesty and I get very animated in our disagreements, but we have an important role to play," he said.

He pointed to their partnership in referring Hardesty’s police oversight measure to voters.

As far as giving up his role as police commissioner and handing it over to Hardesty, Wheeler said it's not happening now. He said he may look at shuffling some bureaus after the Aug. 11 special election, when voters choose between Loretta Smith and Dan Ryan to fill the seat held by the late Nick Fish. He will take a broader look in January when the new city council is sworn in.

Message to members of the Portland Police Bureau

In early July, the Portland Police Association executive board took a vote of "no confidence" in the Portland City Council saying they didn't feel they had the council's support. The union president, Daryl Turner, said Wheeler's support had been spotty and sporadic.

Wheeler said he has a lot of respect for the men and women of the Portland Police Bureau, both sworn officers, and those who work at the bureau who are not sworn officers. He called their job tough, thankless, and dangerous, and he said he understood their anger and frustration.

Wheeler called on members of the Portland Police Bureau to work with the community and lead changes. He said they know better than anyone else what it takes to make an effective public safety system for everyone.

"There's a lot of trust-building that's going on right now and we need the men and women at the Portland Police Bureau at the table every step of the way," he said.

Mayor Wheeler narrowly missed reaching the 50% threshold in the May primary to avoid a runoff. He now faces urban policy consultant Sarah Iannarone in the November election.

Iannarone has criticized Wheeler for failing to deliver on the promises he made for solutions to homelessness, affordable housing, climate change and equity.

"She's saying what she has to say. As my opponent, I'm guessing she's not going to be out there saying what a great guy I am, and how fantastically well I'm doing," he said.

He said the truth is somewhere in the middle and admitted homelessness has gotten worse under his leadership.

"There's no denying that," he said. "Nationally, that's been the case and that's the case here in Portland."

However, he said he's proud of the work he's done with Multnomah County and other organizations to address the chronically homeless and those with mental health and addiction issues and connecting them with support services.

"There's a lot of good work going on and I hope the public has the opportunity to step back and reflect on the work that I've done," Wheeler said.

Message to the community

Wheeler said he knows a lot of people are feeling overwhelmed by the challenging times, but asked for their help in improving the city.

"These are challenging times, I know. The COVID crisis, the economic crisis, what's going on in the streets. I want to remind people this is an opportunity. It's a transitional time and all of us have a role to play in writing the future of this city," he said.