To help support and celebrate its vendors through the holidays, Street Roots published its “Holiday Zine: Survival,” featuring vendor poetry, essays, and artwork. 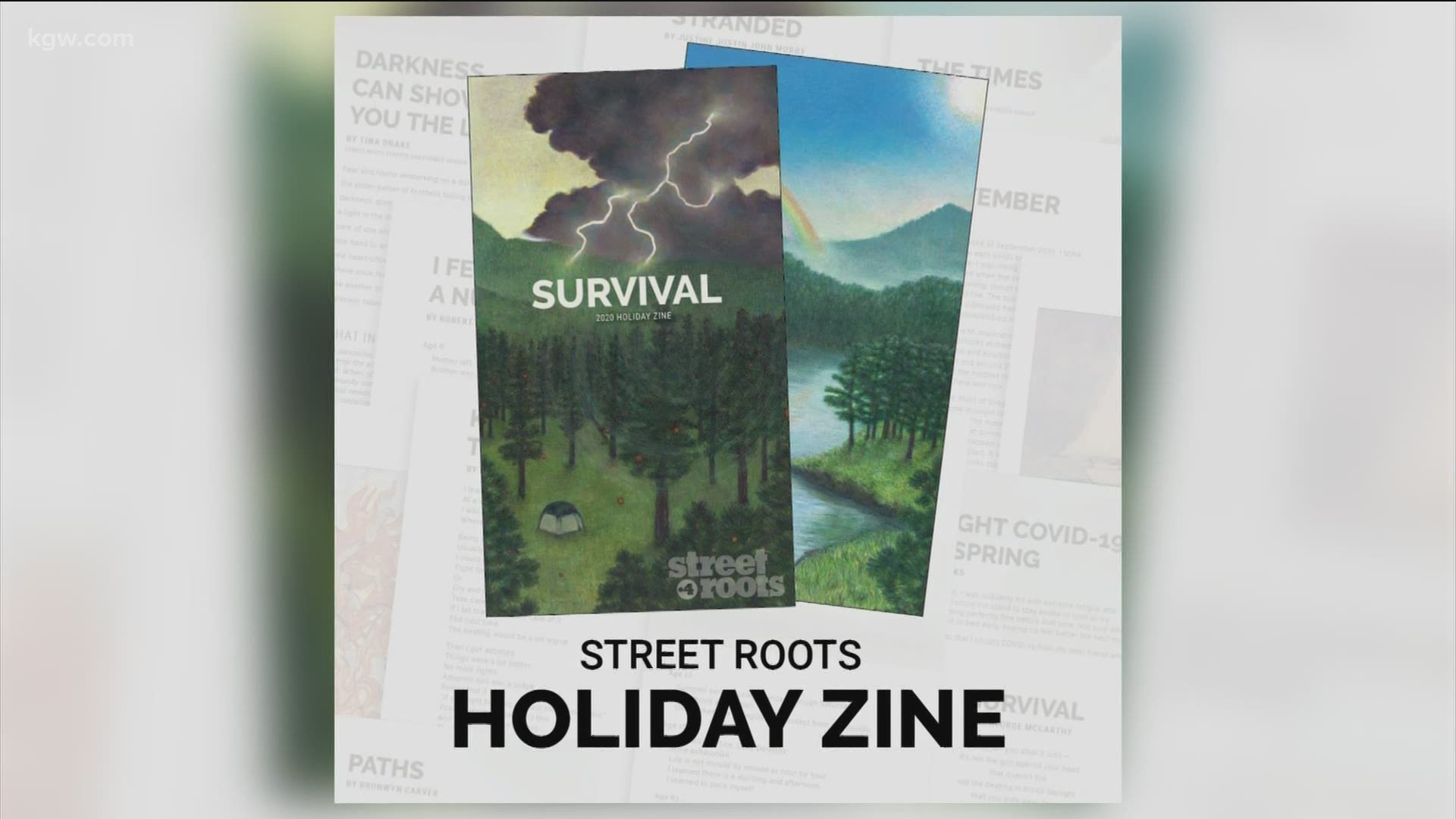 PORTLAND, Ore. — The Portland nonprofit Street Roots has been innovating ways to support the city’s most vulnerable citizens during the pandemic and approaching winter months.

Street Roots is a weekly alternative newspaper sold by vendors, who are experiencing homelessness and poverty, as a way to earn income.

The pandemic has forced Street Roots to adapt and publish its paper online, as well as selling physical papers from outside their front door. They’ve set up propane heaters to help keep vendors warm and dry.

“We just keep getting more creative. We learn from the folks we work with,” Street Roots executive director Kaia Sand said. “People who are surviving on the streets can be incredibly creative. They’re sort of like the stars in our galaxy. They really illuminate the way.”

'Stars in our galaxy'

Two of the stars in that galaxy are staff members Raven Drake and Gary Barker. Sand, Drake and Barker were guests this week on “Straight Talk.”

At the start of the pandemic, Drake, who has experienced homelessness herself, set up a medical tent to help take care of people on the street, and organized vendors into an action team. She was recently hired as a staff member to lead the Street Roots ambassador program.

Barker is a Street Roots vendor and also an ambassador in the program Drake leads.

“Our ambassador program is an initiative to take outreach and advocacy to the next level," Drake said. "To empower those stars in our universe. To take them to new heights. To let their voices be heard."

Barker said he’s on the street telling others about Street Roots and how they can become vendors and get paid like he does. He wants to be an example that people living on the street are much more than a stereotype.

“I am out passing on good will," Barker said. "Letting people know just because I was homeless that I am alive, still functioning.  Not all people who are homeless are drug addicts or not good for society. They need to be looked at in a different way,” he said.

'The most beautiful element of humanity and charity'

According to the 2019 point in time count, a federally mandated count of each community’s homeless population, there were more than 4,000 people experiencing homelessness in Multnomah County. The homeless crisis has become even more visible amid the COVID-19 pandemic, and economists expect it could get worse with job losses and financial hardships created by the pandemic.

Drake hopes when people look around and see all the tents and tarps throughout the city, they think about the people living inside those tents.

“If you look around, you see families taking care of each other," she said. "On display in front of you, in its rawest form, is the most beautiful element of humanity and charity. People share whatever they have so that as a group they can survive."

Sand recounted a story she wrote about in a recent column. A homeless couple, Max and Deanna, got married last April in the Street Roots office. Deanna wore purple. Max wore a fedora. Last winter, Deanna had to have her lower legs amputated after she suffered frost bite.

Max designed purple sweats for his new wife with special pockets where she could put hand warmers to protect her legs from needing to being amputated any further.

“That’s the kind of love. That’s the kind of ingenuity that’s happening all over the place," Sand said. "So, I just ask people to remember to have a little curiosity and openness about all of the people who are being really creative, and surviving, but are also incredibly poor."

“We are so proud of this,” Sand said.

The publication’s cover artwork was created by vendor Phoenix Oaks.

Customers can find locations and vendors to buy the 2020 holiday zine at streetroots.org/vendors. Sand said she thinks vendors would happily sign their work, too.

Vendors are also offering a safe, cashless system through Venmo, so customers and vendors can remain physically distant.  Customers can Venmo vendors at @streetroots using the vendor’s name and badge number.

Vendor Gary Barker has been using the Venmo system and thinks it’s convenient for vendors and customers.

Community support and a sense of purpose

Barker said he and other vendors are incredibly grateful for community support especially during the holidays.

“To me, it gives me an opportunity to have a sense of purpose in my life," he said. "I didn’t have one at all. I was just sitting on the curb, getting involved in things I didn’t need to get involved in. I’m not asking for a handout. I’m actually working to earn money to help myself."

Drake said it’s part of their mission at Street Roots to remove barriers and provide opportunities for people living in poverty.

“At Street Roots, it’s a constant mission to create income opportunities for those living on the streets and those impoverished," she explained. "We have an eye to the future to meet new people, create partnerships and create those opportunities."

How you can help

Through community support during the pandemic, Street Roots has been able to put more than half a million dollars into the pockets of people living on the streets.

Sand said those donations have helped them hire four new staff members, including Drake and Barker.

They’ve also launched an initiative “Branching Out for Street Roots.” It’s a bulk subscription for housing complexes, condos and businesses.

“Vendors will bring the subscription to you. We are finding creative ways to connect our community to vendors,” Sand said. “Ultimately, it’s about increasing income [for vendors] and it’s about making community ties across housing status.”

Barker hopes this holiday season people will remember people who are houseless aren’t that much different from them.

“The most important ingredient for me is they are human," he said. "They think the same way the housed think. They have responsibilities and bills to pay."

To donate, go to streetroots.org/donate.