"Peaceful protests, in my opinion, might not necessarily be moving the conversation forward," Iannarone said during a wide-ranging interview on KGW's Straight Talk. 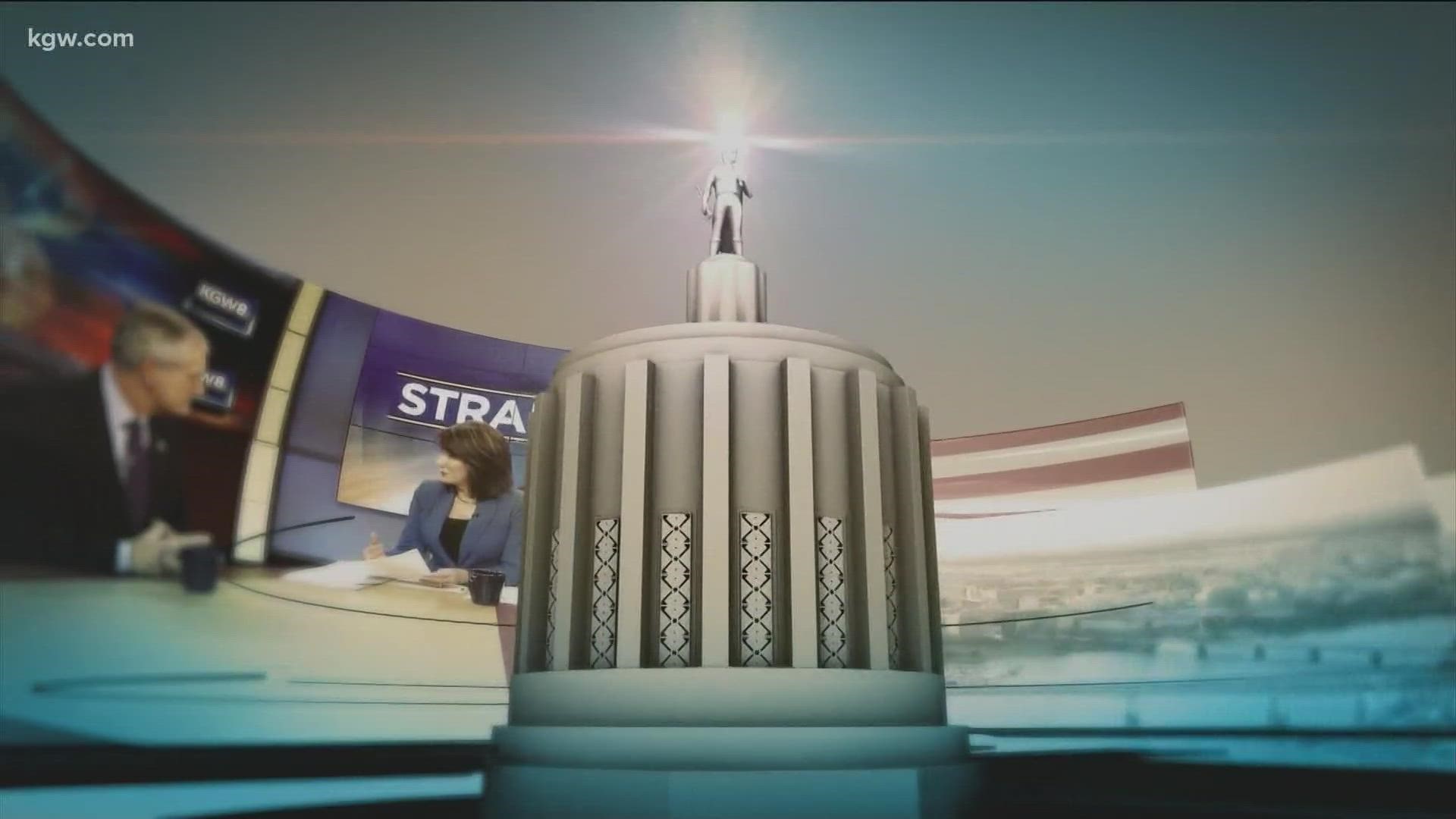 PORTLAND, Ore. — Portland mayoral candidate Sarah Iannarone positions herself as a more progressive alternative to incumbent Mayor Ted Wheeler, who is seeking his second term. She's made police accountability a major part of her platform, and has joined protesters on numerous occasions calling for racial justice and an end to police brutality.

Iannarone joined KGW for a taping of this week's episode of Straight Talk.

When asked if she would denounce the smaller group of nightly protests that have gone on for more than 70 nights and often turn destructive and violent, Iannarone declined.

"I know nobody controls a social movement," she said. "We need to understand these protests are part of a healthy democracy. Peaceful protests, in my opinion, might not necessarily be moving the conversation forward."

Iannarone's comments were made during the show's taping on Thursday. On Friday, Iannarone’s campaign sent KGW this statement on the issue:

Criminal activity is illegal, and of course I don't condone it. What I'm focused on is ensuring police do not use violence and even lethal force against people who have done nothing wrong, as we have seen nightly, and for decades. We must not take our focus off why these recent protests began, and reimagine public safety so we can save lives. I condemn arson, obviously. I also condemn the countless deaths of Black individuals at the hands of police.

Largely peaceful protests in Portland have continued nightly for 10 weeks since the killing of George Floyd on Memorial Day.

On the night of Aug. 5, a crowd gathered outside the East Precinct in Southeast Portland. Some in the crowd tried to set the building on fire while officers and others were inside, according to Mayor Wheeler.

"We have people who are intentionally planning to go out and attack precincts," Lovell said. "These senseless attempts to injure officers and destroy police facilities are reprehensible and need to stop."

"I feel that lives hang in the balance," he said.

Lovell has asked the community to denounce the violence.

When asked if she would denounce the criminal activity and the fires being set to buildings with people inside, Iannarone again side-stepped the question.

When pressed further, she said, "Here's what I have to say. Their outrage at the police is valid. And the problem of police brutality and executing Black lives in the streets is more important than petty vandalism. We can't forget that in this historic moment," she said.

Iannarone said the city won't see an end to the protests until police brutality stops and accountability is mandated. She said the Portland Police Bureau should be de-escalating, not declaring riots and using batons and tear gas.

"The police have not done a good job of policing the police. And so, for Chief Lovell to respond to protests about police brutality with police brutality undermines what we're trying to accomplish," she said.

Iannarone was quoted in an article titled “Antifa in Focus” in the December 17, 2019 issue of Playboy Magazine. In the article referring to antifa, or anti-fascism, Iannarone said, “Our society’s lack of awareness and understanding of the issue is extremely disappointing to me. Because this problem exists within the system, it’s important we use radical tactics—though I definitely think electoral politics matter, and that’s why I’m running.”

On Straight Talk, when asked what “radical tactics” she was talking about, Iannarone said what’s radical is demilitarizing the police force and investing in food pantries, and making sure families have access to universal early education. She said there are people on the right who want to make being anti-fascist negative and scary.

“These right-wing types call me an anarchist, a communist, a terrorist, because they are afraid of progressives who stand up to bullies,” she said.

Iannarone said those who support fascism shouldn’t vote for her.

She said antifa is about standing up to white nationalists and opposing racism.

“Honestly, the only bombs I’ve thrown are on my Twitter account, though I know my team wishes I wouldn’t, so that’s the most I engage in,” Iannarone said.

One of those Twitter bombs was directed at Mayor Ted Wheeler. On July 2, Iannarone said she was infuriated a community journalist had their camera equipment taken.

She blamed Portland police and Wheeler, ending her tweet with “F*ck you, Ted Wheeler, seriously.”

This is absolutely infuriating. I contributed to the crowdfunding campaign to purchase Cory's camera because he was operating where more mainstream outlets fear to tread, reporting on issues related to homelessness in important places and ways.

On Straight Talk, Iannarone defended the tweet and the tone.

Historically, the mayor of Portland has taken on the role of police commissioner overseeing the Portland Police Bureau.

Currently, Mayor Ted Wheeler is police commissioner, although Commissioner Jo Ann Hardesty, the first Black woman on the Portland City Council, has said she would like to take over that role.

Iannarone said if she's elected, she would give the police bureau to Hardesty to run. She said it's important to listen to Hardesty on this issue since she has been a leader in calling for police reform for decades.

"If she believes that she wants to do that, and she believes that's what it would take to rebuild trust with the rest of the city, where the mayor's trust is at an all-time low, I would certainly support her request in that," Iannarone said.

Although, they’ve had very public disagreements over police reform and his handling of the Portland Police Bureau, Commissioner Hardesty has endorsed Wheeler for a second term.

During her appearance on Straight Talk last month, Hardesty said Wheeler has come a long way since she first joined the council in 2018, and it takes time to finish projects and make the transformations they’re trying to make.

When asked about Hardesty’s endorsement of Wheeler, Iannarone said she respects Hardesty deeply, but she said four years seems long enough to her to get things done.

“If a mayor can’t be effective in four years, I’m not sure why we’d sign up for eight years,” she said.

Uptick in shootings in July

The month of July in Portland was the deadliest in 30 years. There were 15 homicides. There were also 99 shooting incidents compared to 35 at the same time last year.

Police Chief Lovell said the city council’s decision to disband the Gun Violence Reduction Team was a mistake. Iannarone had called for its elimination earlier in her “Rethinking Public Safety Plan.” And she thinks the council’s cuts of $15 million to the police bureau budget don’t go far enough.

If she’s elected, she said she’d push for a $50 million cut, because she said that’s what the community is asking for.

“This is an amazingly easy time to be an elected official. You’ve got community members in the street telling you what they want,” she said.

She would direct that money toward the Portland Street Response Team, a pilot program led by Commissioner Hardesty.

Instead of the Gun Violence Reduction Team, Iannarone said youth of color she’s spoken with want community peace officers or health officers who live in their neighborhoods.

Iannarone has called on Oregon Gov. Kate Brown to return to a stay-home order to respond to the uptick in coronavirus cases.

Citing the more than 330 deaths from the virus in Oregon and more than 20,000 cases, Iannarone called it a disaster of unthinkable scale.

She said she’d called for tighter social distancing restrictions and re-thinking reopening in the short term. She’d also work to make sure there was a safety net to help people economically.

“If this were an earthquake, we’d have every resource mobilized. And I don’t know that we’re mobilizing the same response to COVID, even though, it’s likewise a disaster,” she said.

She also highlighted a plan for economic recovery from the COVID-19 crisis that includes investments in a “Green New Deal,” and utilizing funds from Portland’s Clean Energy Fund, a business license surcharge passed by voters in 2018 that includes $44-$61 million for clean energy projects, homes, and jobs.

She also supports a Universal Basic Income that she said she would try to fund from day one as mayor.

Iannarone has been especially critical of Wheeler for what she calls his “shameful” progress on building affordable housing.

On the portland.gov website, Wheeler said there are 1,454 permanently affordable bond housing units built, or planned, to house an estimated 2,975 people.

“Those are housing units in the pipeline. And people don’t live in pipelines. They live in completed housing,” Innarone said.

Iannarone pledged to leave no stone unturned to use all the resources possible to get people into housing.

Iannarone said one of her most important qualifications for being Portland’s next mayor is that she’s not a career politician. She’s a working mom who doesn’t have a safety net of inherited wealth.

“This status quo is clearly not working. The incumbent is promising more of the same and I think Portlanders are tired of their biggest issues being used a political football,” she said.

She’s taken advantage of the city’s new open and accountable elections program that uses taxpayer dollars to match donations. She said she’s set to break city elections records for most number of individual donors ever.

“This is going to be an administration that has its doors open to the people, that’s leaving no idea off the table and mobilizing all of our resources to solve our most pressing issues and our biggest problems,” Iannarone said.

Read more about Iannarone’s positions on the issues on her website.