Sen. Wyden says breach of US Capitol 'was horrifying in every sense'; blames Trump for inciting violent mob

The Democratic senator from Oregon called President Trump "a clear and present danger" and said he supports efforts to remove the president from office. 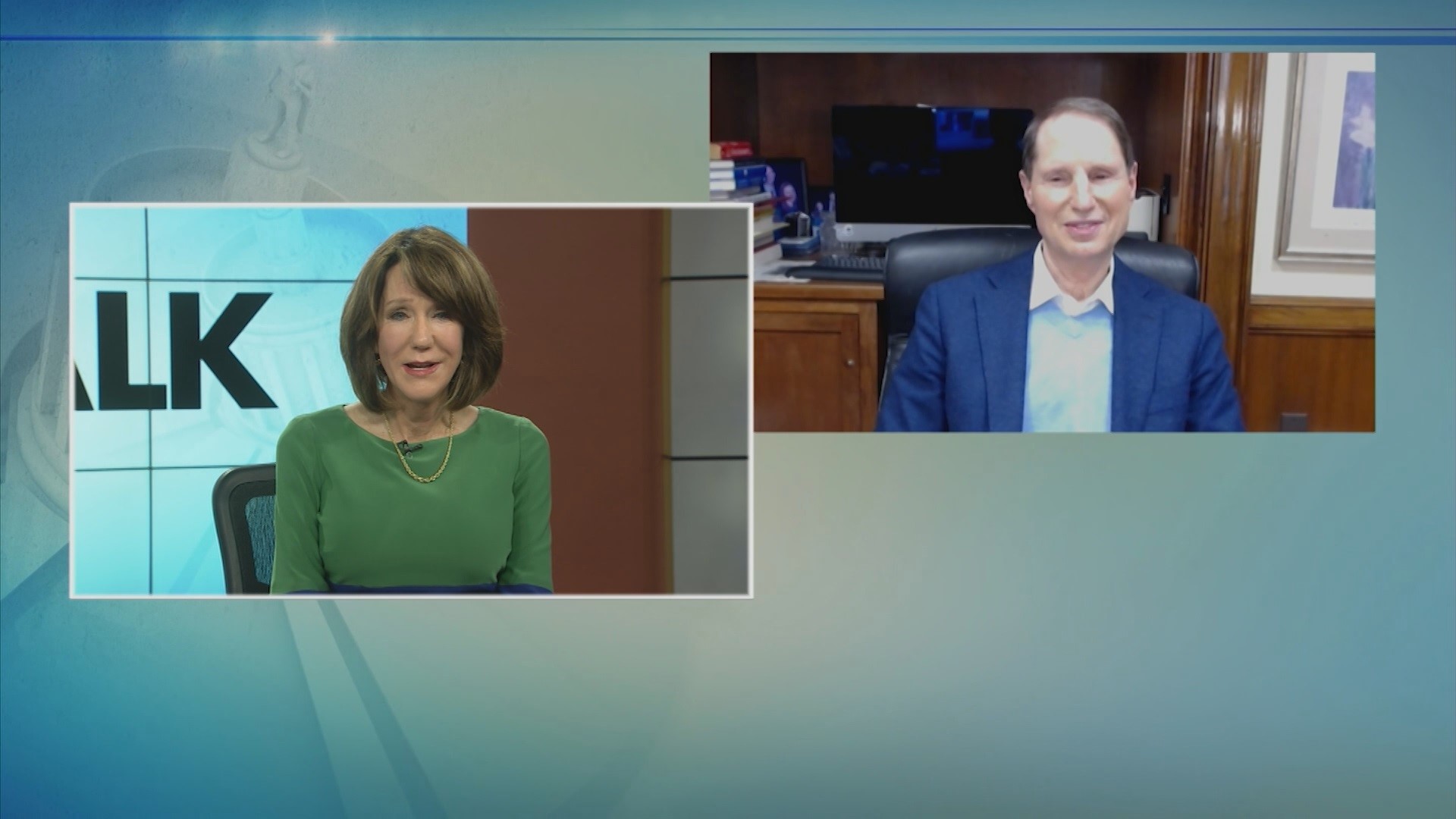 PORTLAND, Ore. — U.S. Sen. Ron Wyden (D-Ore.) was on the Senate floor when members of a violent pro-Trump mob broke into the U.S. Capitol on Jan. 6. Wyden talked about the incident on this week's episode of KGW's Straight Talk with Laural Porter.

He called the siege "a horrifying experience in every sense," and lashed out at President Donald Trump, and what he called "domestic terrorists" who stormed the Capitol.

"People have called them thugs or hooligans," Wyden said. "They're domestic terrorists, because they were trying to use intimidation to carry out a political agenda, which was to set aside the process of certifying the vote."

The mob of Trump supporters broke through police barriers and breached the Capitol building during a joint session of Congress while lawmakers were in the process of certifying President-elect Joe Biden's victory in the 2020 election. Wyden laid the blame squarely at the feet of President Trump.

"He spent weeks and weeks inciting this effort," Wyden said. "This was not just a one-time thing where he tweeted once. He kept talking about a wild, wild set of events in Washington, DC. And the reality is we faced an American carnage here. He did everything he possibly could over an extended period to promote it."

Wyden says Trump is 'a clear and present danger'

Wyden said it's critically important for the president's Cabinet to invoke the 25th Amendment. Wyden said that would be the quickest way to remove President Trump from office.

RELATED: VERIFY: Can the Vice President invoke the 25th Amendment to remove Trump?

But, he believes lawmakers should also push for impeachment.

"It's so important, you have two tracks," Wyden said. "One is the 25th amendment. The second is what Nancy Pelosi promoted today. I support both," he said.

On Friday, House Speaker Pelosi threatened the House could move toward a second impeachment of the president if he did not resign immediately. House Democrats plan to introduce an impeachment resolution on Monday.

Why wasn't the US Capitol more secure?

Americans watched the storming of the Capitol in disbelief, many wondering how the rioters could so easily breach what is supposed to be one of the most secure buildings in Washington, D.C. Wyden said that will be investigated.

"We are starting to see plans for what's called an 'after action' kind of audit," he said. "Clearly, there has to be a top to bottom fresh look at how this happened."

Wyden pointed out there have already been resignations. The head of the Capitol Police and two other senior security officials are resigning amid scathing criticism over the lack of preparedness of the police force to deal with the violent mob.

Wyden also emphasized there were many people working in the Capitol complex who are not lawmakers or part of security, including cafeteria workers and staffers who he said also need to be protected, and once again had sharp criticism for President Trump.

"And to see this citadel of liberty to be assaulted this way--and to see it being done by the President of the United States," Wyden said. "All of this was done because Donald Trump is so narcissistic that's all he was thinking about was himself and not the well-being of this country."

1 / 16
AP
Police with guns drawn watch as protesters try to break into the House Chamber at the U.S. Capitol on Wednesday, Jan. 6, 2021, in Washington. (AP Photo/J. Scott Applewhite)

Before the storming of the Capitol, the big news was the outcome of the Georgia Senate runoff elections the day before. The Democratic candidates won both races, which shifts the balance of power in the U.S. Senate. The chamber will now have a 50-50 split with Vice President-elect Kamala Harris set to be the tie-breaking vote. After the inauguration, Wyden, the ranking Democrat on the powerful Senate Finance Committee, will become chairman of the committee.

Wyden held the position briefly in 2014, when then-Chair Sen. Max Baucus of Montana was appointed ambassador to China. However, Republicans regained majority control of the Senate in the November midterm elections, and Wyden once again became the ranking Democratic member.

This time around, Wyden said he will focus on the economic issues Oregonians talk about in their kitchens and living rooms, from rural parts of the state to the metro region.

He said the race in Georgia that led to the shift in the Senate was all about economics.

"The Republican candidates there were basically for more tax breaks for multi-national corporations and the affluent, the kind of trickle-down economics," Wyden said. "We believe, and the candidates in Georgia believe, you grow the economy from the middle out."

One of his first priorities will be to pass another COVID-19 relief stimulus package, including $2,000 checks for qualified Americans and an extension of $600 weekly unemployment benefits.

"We have a lot of people in Oregon who are walking an economic tight rope." he said. "Balancing the food bill against the fuel bill against the rent bill, those $2,000 checks are going to be highly important."

"In communities of color, you often have what I call health care deserts. I want to see equal access to services," he said.

He also wants to bring down the cost of health care. He said one way to do that is by changing the laws that restrict Medicare from negotiating lower prescription drug prices.

"Insulin is basically the same insulin we had decades ago, but the prices just go up and up. I want to lift the restrictions, so Medicare can negotiate down the cost of medicine," Wyden said.

Wyden is a two-time winner of the Town Hall Project's MVP award for holding the most town halls of any U.S. senator.

To date, he's held 970 in-person town halls across the state. The pandemic put a temporary halt to his pledge to have one town hall each year in each of Oregon's 36 counties, but he's continued to listen to Oregonians through virtual town halls. He has eight of them planned in the coming week. They're slated for residents of Coos, Curry, Gilliam, Grant, Lane, Sherman, Washington and Wheeler counties. Oregonians can submit questions ahead of time and watch here.

Wyden is up for reelection in 2022. He laid to rest any speculation he might retire after his current term, saying he has too much still to do for Oregon.

For example, he's proposed a 21st century Civilian Conservation Corps he said would give thousands of young people an opportunity to work in the forest on wildfire prevention. And as chair of the Senate Finance Committee, he wants to emphasize small businesses he called the foundation of Oregon's economy, by expanding opportunities for trade and manufacturing.

"It's going to be, for me, an opportunity to bake big ideas with Oregonians that are going to give us a safer, more secure future across Oregon and create a lot of opportunities for folks to get jobs where they can make a living," he said.

Basketball and his friendship with Portland Trail Blazer Enes Kanter

Some Oregonians may not know Wyden was a star basketball player at Palo Alto High School and got a basketball scholarship to the University of California at Santa Barbara. He said he had a dream of playing in the NBA.

"It was kind of ridiculous," Wyden joked. "At 6-foot-4, I was too small and I made up for it by being really slow."

He may have gone into politics instead, but Wyden has been an avid and loyal Portland Trail Blazers fan for decades, and has developed a friendship with backup center Enes Kanter. Kanter, who grew up in Turkey, has been an outspoken critic of the authoritarian regime of Turkish president Erdogan.

Wyden talked about his friendship with Kanter on KGW's 3-on-3 Blazers podcast and was surprised when Kanter made an unexpected appearance.

The moment @EnesKanter joined the chat

Oregon Senator @RonWyden was surprised, excited to see his friend. Did you know Wyden can hoop? The conversation ranges from Obama playing, a trip to Moscow for Sabonis, Kanter running for office

"I really appreciate his leadership on human rights," Wyden said of Kanter. "He's always looking for a way to advance a human rights agenda. I appreciate him using his bully pulpit to do it."

Straight Talk airs Friday at 7 p.m., Sunday at 10 a.m. after NBC's Meet The Press, and Monday at 4:30 a.m. Straight Talk is also available as a podcast.