In defeating incumbent Chloe Eudaly, Mapps will also become part of the city's most diverse council, with a majority of minority members. 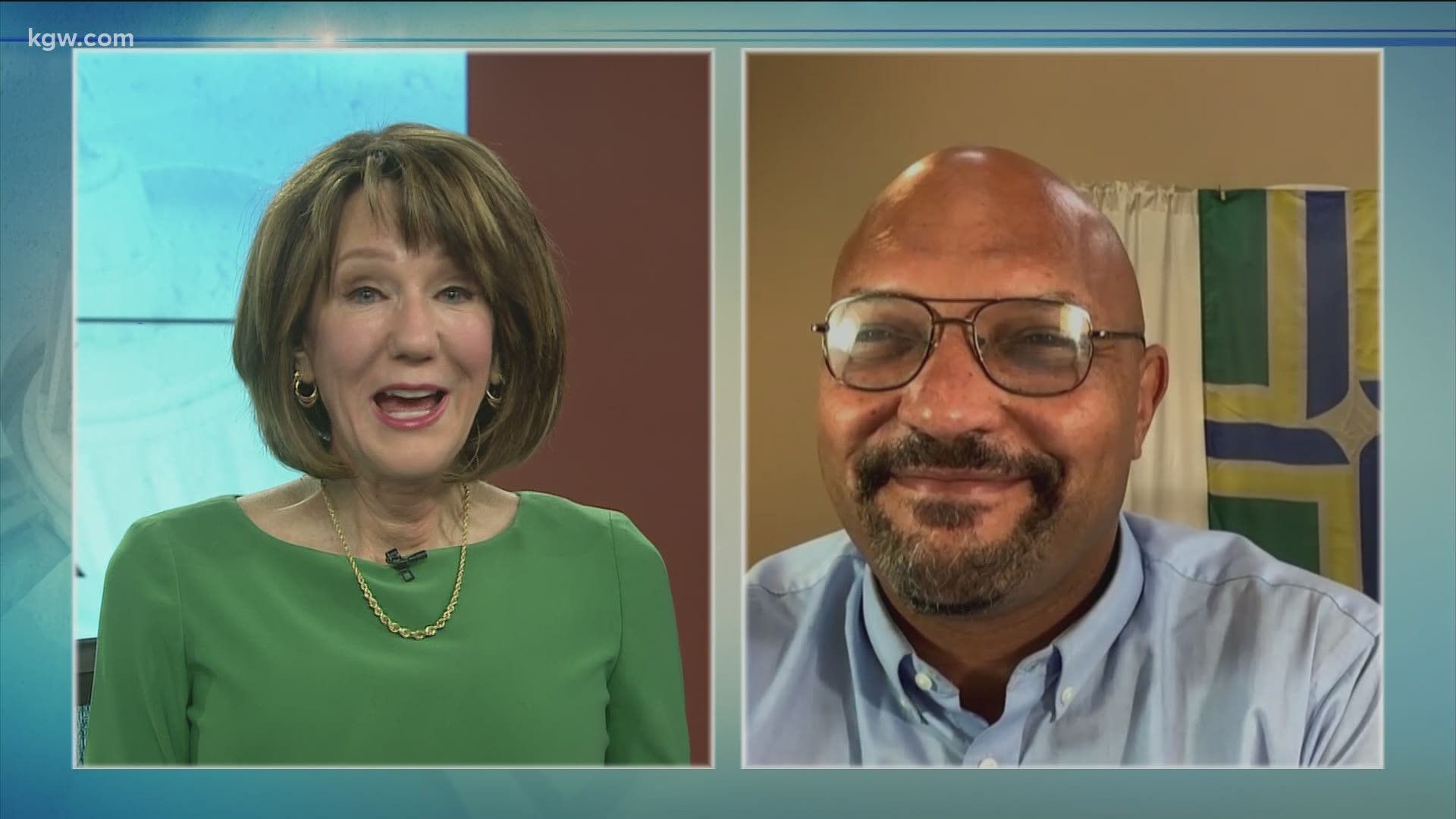 PORTLAND, Ore. — Portland voters made history on Nov. 3 by electing just the third Black man in city history to serve on city council.

In defeating incumbent Chloe Eudaly, Mingus Mapps will also become part of the city's most diverse council, with a majority of minority members. Mapps will join the first Black woman on the council, Jo Ann Hardesty, and the first Latinx member, Carmen Rubio.

Mapps follows in the footsteps of the first Black city commissioner, Charles Jordan, who spent 10 years on city council beginning in 1974. He then served 14 years as director of Portland Parks and Recreation and is credited with being a pioneer for the city's park system, implementing landmark and lasting programs, including the free annual Movies in the Park series.

Commissioner-elect Mapps was a guest this week on "Straight Talk," and called this moment in history both profound and personally humbling.

"It was less than 100 years ago Oregon repealed the last of its Black exclusion laws," Mapps explained. "Those were the laws that prevented African Americans from even just existing here in Oregon. And now I am the third African American man to serve on city council. And we have a majority of minorities on council. I am incredibly excited for this team."

Commissioner-elect Mapps' first meeting since the election with Mayor Ted Wheeler was scheduled for Friday. Mapps expected to talk about the transition to city hall and pressing issues facing the city such as the COVID-19 crisis, homelessness and police reform.

Mapps also expressed admiration for the mayor, as well as his new colleagues.

Mapps said he's been in touch with all the council members in some way, either by text, phone or social media. He said everyone at city hall has been incredibly helpful, constructive, and gracious in smoothing the way to his transition into his new commissioner's role.

In her concession speech, Commissioner Chloe Eudaly said she felt the election of Mapps was a step backward for progress in the city.

We were poised to have one of the most progressive city councils, but with the wins by Ted Wheeler and Mingus Mapps, we've taken a step back," she said.

Mapps said he recognizes elections are tough and appeared unfazed by her post-election comments.

"I want to thank Commissioner Eudaly for her service to the city," he said. "Elections are hard and election nights are particularly hard.. What I want to do is bring every Portlander to the table to address the incredible challenges we face at this moment."

Although, he won't be sworn in until January, Mapps has already jumped into action calling out people involved in violent and destructive protests. After, a small group of demonstrators vandalized Commissioner Dan Ryan's home on Nov. 5, Mapps held a video news conference with two dozen Black community leaders, and denounced what they called a "campaign of intimidation and vandalism.”

Earlier that day, Ryan had voted against a city council amendment to cut $18 million from Portland Police Bureau (PPB) budget.

On Straight Talk, Mapps said the violence and destruction makes no sense.

"It's not just Commissioner Ryan," Mapps said. "It's small businesses and everybody facing violence. A couple of days ago, the Democratic Party's headquarters in Multnomah County was vandalized. This makes no sense. This is not the Portland way. We can disagree. But, let's leave the violence, the intimidation and the arson in the past," he said.

Community activists say they're watching Mapps and the other commissioners to see what changes the council makes when it comes to police reform.

Candace Avalos, the chair of the Citizen Review Committee, told The Oregonian there's an active community pushing for transformational change.

"I will always give them a chance, but I will be keeping a very close eye. They're in the hot seat right now," Avalos told The Oregonian.

Mapps said he thinks the debate over police reform could be framed in a different way. He thinks instead of picking dollar figures of how much to cut from PPB, the discussion should be centered on the kind of public safety system the community wants.

"So, I don't know if that means a $50 million cut, or $10 million, or reallocating resources from one program to another," Mapps said. "What we really need to focus on are the outcomes we want. After that, we can figure out the budgeting."

In addition to police reform, Commissioner-elect Mapps said addressing the COVID-19 crisis is a top priority. He pleaded with citizens to wear masks, social distance, and when coming together with family and friends, to keep gatherings small.

"We really are in the darkest days of the pandemic," Mapps said. "And everyone needs to pay attention to the advice given by the governor and our health care authorities."

A third priority is finding solutions to the homelessness crisis. He said he's deeply concerned about people sleeping on the streets with COVID spreading and the rain and cold weather upon us.

"As a community, I think we should find safe places for our houseless neighbors to sleep, somewhere they can be out of danger and have access to hygiene services, and hopefully medical care, too," he said.

Mapps said he and his team are studying the mayor's plan to move houseless people off the sidewalks and into city shelters, and possibly large managed camps. He hopes to learn more in the coming weeks as he prepares to officially take his seat on the Portland City Council.

'Time to get to work'

Mapps thanked everyone who participated on Election Day, but he said now is the time to move beyond that and asked for everyone's help.

"It's time to get to work," he said. "I invite everybody to come to the table to figure out how we make progress on COVID, homelessness, and police reform. We're going to need all hands on deck all throughout the winter."