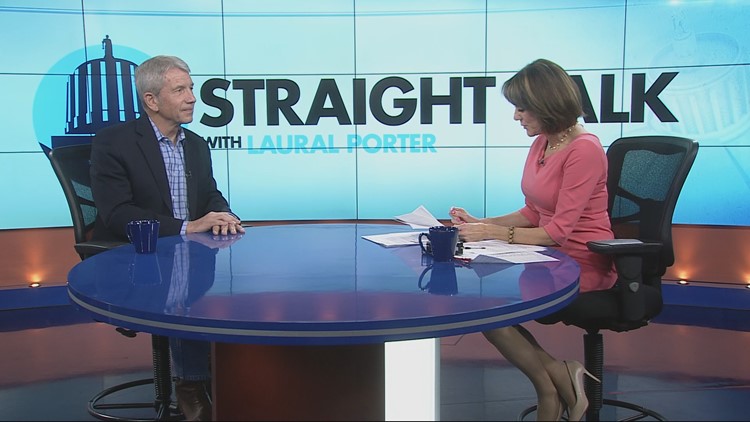 Oregon Rep. Kurt Schrader says people should be confident in US response to coronavirus

On KGW’s current affairs show Straight Talk the Democrat told host Laural Porter that Oregonians should be calm, and confident in the nation's health authorities.

"I don't want people to get overly concerned. It's good to be concerned, but if you make this into more than it is, it undermines the integrity of the system," he said.

Schrader said people should feel comfortable, listen to the Centers for Disease Control and Prevention, and reputable news channels, not social media.

He said he doesn't want to politicize the issue and pointed out that Congress, in a bipartisan deal, approved 8.3 billion dollars in emergency funding which President Trump signed.

RELATED: Trump signs $8.3B bill to combat coronavirus outbreak in US

Schrader said the funding package will make sure the CDC, and state, and local governments have the resources they need to combat the coronavirus outbreak.

Schrader, a retired veterinarian, has long been a voice in something called zoonotic diseases, where a virus starts in animals and mutates to affect humans.

It's thought COVID-19 started in animals sold in a market in Wuhan, China. Schrader has teamed up with another veterinarian, Rep. Ted Yoho (R-Fla.) to develop a framework to coordinate research between federal agencies.
It's called the "One Health Act," something he and Yoho were working on before the coronavirus outbreak.

"Vets are trained more thoroughly about zoonotic diseases, because we have to worry about pets and animals potentially transmitting diseases to their owners," Scrader said.

He said there's been a gap in coordination on the international, national, state, and local levels. He said his plan would bring together veterinarians who know these diseases inside and out, as well as environmental professionals who understand the factors that make people more susceptible, along with the medical community.

"This One Health approach is the smart thing to do. I wish we'd had it before. We could have been more coordinated and allayed a lot of people's fears," Schrader said.

Schrader is running for a seventh term in Oregon's fifth district. Some political analysts have said the May Democratic primary could be his toughest race yet, as he faces challenger Milwaukie Mayor, Mark Gamba. Gamba is running to Schrader's left as a progressive Democrat, and has made addressing climate change a central campaign theme. Gamba has described Schrader's approach to fighting climate change as "lukewarm."

"I've been working on climate change before my opponent ventured into politics, long before it was popular. I voted for a cap-and-trade bill when I first came to Congress supporting investments to get to zero emissions over a period of time," he said.

Schrader pointed to bipartisan legislation he is currently working on with Rep. David B. McKinley (R-W. Va.). He said it aims to reduce emissions in the power sector.

The legislation intends to accelerate innovation in clean energy technologies, such as carbon capture, capturing carbon dioxide waste. It aims to develop a clean energy standard to reduce carbon emissions the power sector would have 10 years to meet.

Porter said many scientists and activists say the planet doesn't have ten years to wait, and asked if his legislation takes too long to make a difference.

He said his proposed bill is the only bipartisan effort that will actually get things going right now.

"Within that time span," he said. " We can make a huge difference."

Schrader said language for the proposed climate change bill should be finalized in the next month.

Schrader also addressed his vote against raising the federal minimum wage, why he's opposed to a single-payer medical system, and his support for Joe Biden for the Democratic presidential nomination.

Straight Talk airs Saturday and Sunday March 7 and 8 at 6:30pm. It's also available as a podcast.