Under the bill, an officer involved in the death or serious injury of a civilian, a shooting, or other use of excessive force, would be entered into a database. 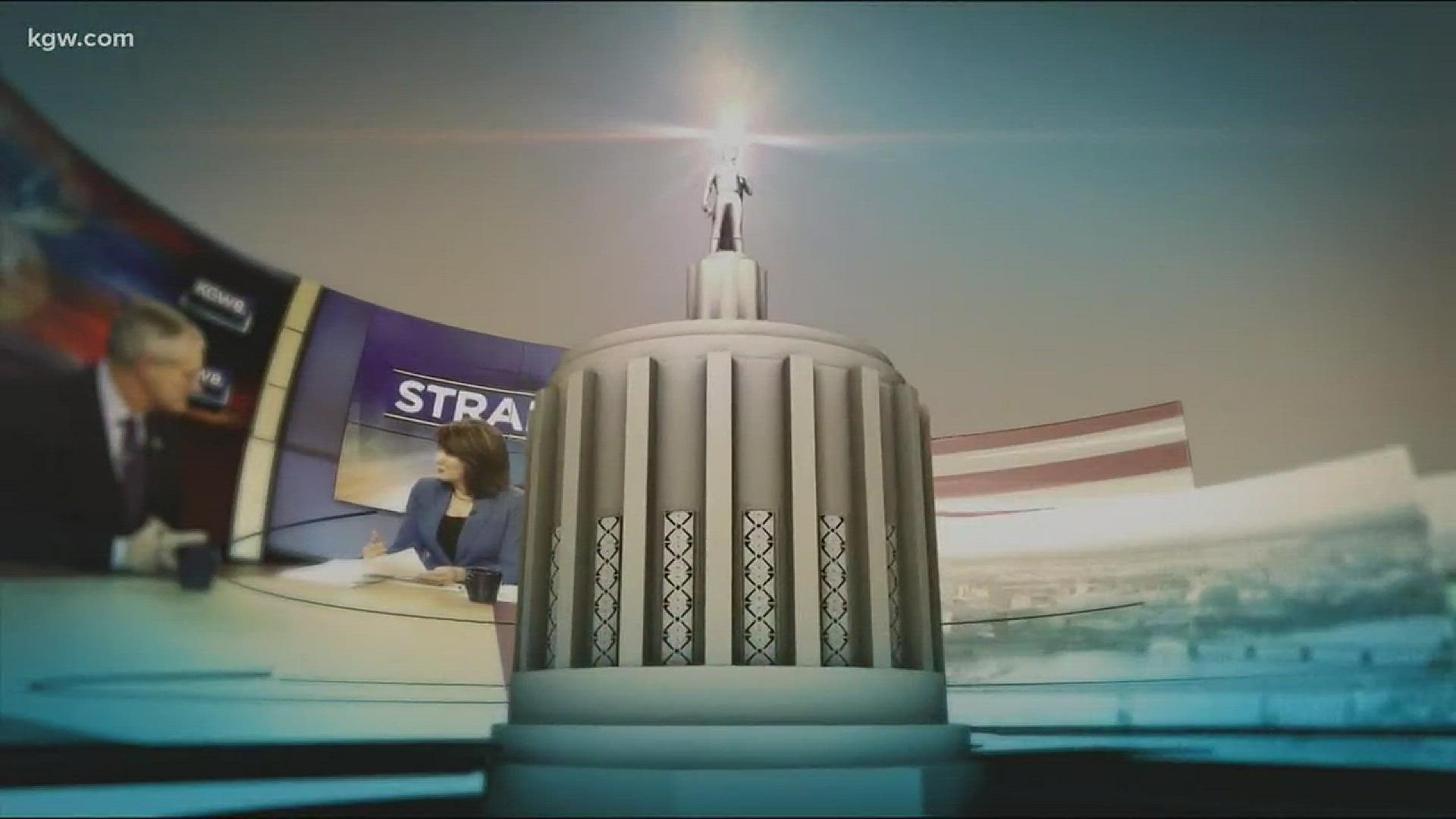 PORTLAND, Oregon — On the morning of George Floyd's memorial service in Minneapolis, Oregon Sen. Jeff Merkley and a group of Democratic senators gathered in Emancipation Hall at the U.S. Capitol Visitor Center.

They stood in silence for 8 minutes and 46 seconds, The length of time a white Minneapolis police officer kneeled on Floyd's neck before he died.

"To stay in silence that long can say a lot and really focus the mind on the tragedy, and the deeper issues that lead to tragedies like this happening one after the other," Merkley said.

Merkley said the group walked away from that solemn experience determined to not just continue the dialogue, but to pass legislation that will lead to change.

Merkley was a guest this week on KGW's current affairs program, "Straight Talk." He told host Laural Porter he was heartbroken and furious when he saw the video of now-fired Minneapolis police officer, Derek Chauvin, kneeling on the handcuffed Floyd's neck. He said the image is now seared into our collective minds.

"Here we are centuries into the dialogue of ending racism, and it seems to be alive and well as an institutional force, and we just have to do so much more to take it on," he said.

Merkley told a story of an experience he remembers when he was a young man working in Washington, D.C. He said he was on an errand with a black relative of a neighbor. They were looking for a hardware store and couldn't find it.

Merkley said he saw a sheriff's vehicle and stopped to ask directions. The black friend was in the passenger seat, and Merkley asked him to roll down the window and ask the deputy where the store was. Merkley said his friend was frozen in terror. And he knew there was no way he could engage with the deputy.

"That huge difference in how this dynamic works between police and citizens is something almost any person from a community of color can talk about. The incidents in their life where they were treated differently because of the color of their skin, and where they had less of a partnership and more fear," he said.

Merkley said he is working with Sen. Cory Booker (D-New Jersey), and Senator Kamala Harris, (D-California) on a major bill looking at many aspects of racism and police brutality and how to end it. He's focusing on one issue in particular: police brutality.

On Friday, he announced legislation called "The National Police Misconduct and Transparency in Hiring Act." He wants to make sure an officer fired for misconduct can't simply leave one department and be hired in another.

In addition, an officer involved in the death or serious injury of a civilian, a shooting, or other use of excessive force, would be entered into a national database.

"What we've found is if a horrific act is conducted, we often discover that individual did similar things in a previous police department before being let go. It's unacceptable." he said.

Merkley noted for every officer who commits a horrific act, there are hundreds of officers who are "absolutely wonderful," he said.

He said he's also working on getting other policing policy into federal law, including making use of chokeholds and other physical tactics that restrict oxygen or blood flow a civil rights violation.

He lists other issues he's working on to address racial injustice in this news release.

On the subject of the protests and President Trump's threats to use military force to put down protests across Americans cities, Merkley called it "completely inappropriate."

He said he was pleased to see Defense Secretary Mark T. Esper break with the president earlier this week, and speak out against the use of military troops to control the wave of protests.

Credit: AP
President Donald Trump holds a Bible as he visits outside St. John's Church across Lafayette Park from the White House Monday, June 1, 2020, in Washington. Park of the church was set on fire during protests on Sunday night. (AP Photo/Patrick Semansky)

However, Merkley said there's something broader he's concerned about.

"The president is not listening to the American people about underlying issues of racism and abuse that occur against citizens in our communities of color.
He is simply saying, 'I don't like protests, protests are terrible, and I'm going to suppress them with force,'" Merkley said.

Merkley was especially critical of the White House for clearing peaceful demonstrators in Lafayette Park, across from the White House, using pepper spray and other forceful measures. The president then walked across the street where he held up a bible in front of St. John's Episcopal Church in a photo op.

"That image is going to remain in my mind as a symbol of the president's absolute failure to understand the basic issues we are wrestling with, and to show any kind of leadership to bring us together to take on those issues," he said.

On the topic of the coronavirus pandemic, Sen. Merkley said he's concerned the nation doesn't have the elemental items in place to get ahead of the virus as much of the country begins to reopen. He said testing and contact tracing have to be available on a massive scale.

He's teamed up with Sen. Elizabeth Warren (D-Mass.) on a proposal to fund 100,000 contact tracers nationwide. It's part of a fourth coronavirus relief package called the "Heroes Act," which overwhelmingly passed the House, but is stalled in the Senate.

Majority Leader Sen. Mitch McConnell, has said it may be a few more weeks before the Senate considers the House Heroes Act, and he said it would be the final aid package. McConnell wants any package the Senate passes to focus on jobs and schools, and maybe include more funding for small businesses.

RELATED: Republicans look to phase out jobless aid to get Americans back to work

However, he is opposed to extending the $600 a week unemployment benefits which run out July 31, and have been a lifeline for 40 million Americans. GOP lawmakers say the additional aid would be a disincentive to return to work. Merkley favors extending the benefits.

"Those payments are what are enabling people to pay their rent and mortgage," he said.

Merkley challenged McConnell on some of the money that was included in the last relief package Congress passed.

"Mitch McConnell spent $175 billion on a tax provision for the wealthiest real estate investors. So, if he's a little worried on spending money on working people, then I suggest, we take back that $175 billion, and reuse it to assist really struggling families across America," Merkley said.

Merkley expressed frustration with how long it's taking for the Oregon Employment Department to get benefits to tens of thousands of Oregonians.

"This is just unacceptable," he said.

He sent a pointed letter last month to then-department director Kay Erickson, asking a series of questions about the hold up. Erickson has since resigned and has been replaced by an interim director.

Merkley said he understands the department has been overwhelmed with applications for benefits and that it is an exceptionally challenging situation, but he said that's no excuse.

"Exceptionally challenging situations require a massive, bold, passionate response, in terms of hiring, communication, and reworking of the database. And I'm sure they are working on this. But, it's not enough," he said.

Interim employment director David Gerstenfeld has promised better communication and transparency. He said the department would hire more staff and update Oregonians on the status of their claims

MESSAGE TO OREGONIANS ON ENDING RACISM

In closing, Merkley had a message for Oregonians about fighting racism head on in the state and encouraged dialogue with police departments and African American leaders to bring about change.