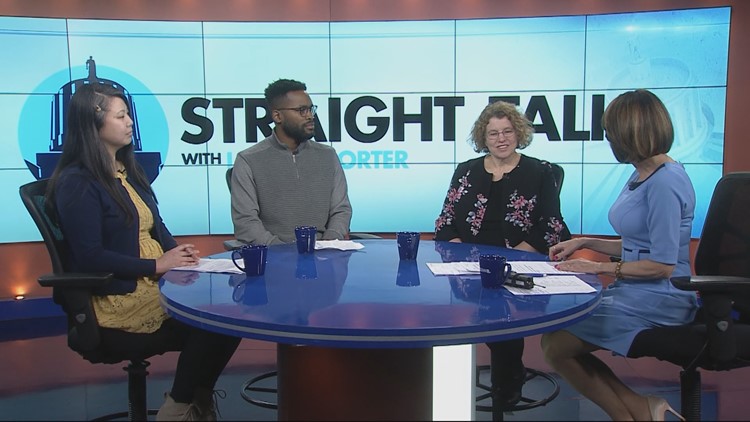 One in nine people in Oregon and Washington face food insecurity

PORTLAND, Ore. — Oregon was once called the hungriest state in the nation. That was in the late 1990s and early 2000s.

The outlook has improved somewhat, according to the chief executive officer of the Oregon Food Bank. But the good news is mixed with bad.

On KGW's current affairs show, "Straight Talk," Susannah Morgan told moderator Laural Porter hunger is at its lowest level in a decade, but the state is still back to 2007 levels.

"And the reason is, even with low unemployment, it's really about living wages, and people having enough income to support themselves and their families, particularly with the high cost of housing," she said.

According to the Oregon Food Bank, one in nine people in Oregon and Washington face food insecurity. "Food insecurity" is when someone lacks consistent access to food and it's how the US Department of Agriculture measures hunger.

Since 2004, KGW and its partners have joined the Oregon Food Bank for the annual KGW Great Food Drive.

It's something Susannah Morgan knows will go a long way to help, but she hopes one day to put herself, and the Oregon Food Bank, out of business by eliminating hunger altogether.

"I have to believe that's possible. We live in the society we create. Maybe it won't happen in my lifetime, but I think we'll get there. And we'll get there quicker if we start now," Morgan said.

The Oregon Food Bank distributes food through its 21 regional food banks and 1,200 food assistance sites throughout Oregon and Southwest Washington. But it also advocates for issues that address the root causes of hunger; poverty, unemployment, and health issues.

In addition, Morgan said, the Oregon Food Bank puts people with lived experience with hunger at the center of everything it does. She said many on her leadership team have struggled with food insecurity.

"Half of my leadership team, and a third of our board, have lived experience with hunger. We are all in this work, because we are the work. And we invite everyone to be in this work with us," she said.

Amy Powers is the regional network manager for the Oregon Food Bank.
She said she struggled to have enough nutritious food for her daughter. She said they had to make tough choices between paying rent, medical bills, and buying food.

"I still feel guilt about the types of food I could access for my daughter. I remember clearly when a coworker visited and looked in my fridge and commented how clean it was. That's because it was empty," she said.

Powers said she felt ashamed, and pointed out that her story illustrates that food insecurity can affect anyone.

"It could be our neighbors, our coworkers, it could be anybody. One medical bill could drive someone into food insecurity," said Powers.

It's also available as a podcast.