Stopping anti-Asian hate: 'It's more than a hashtag' 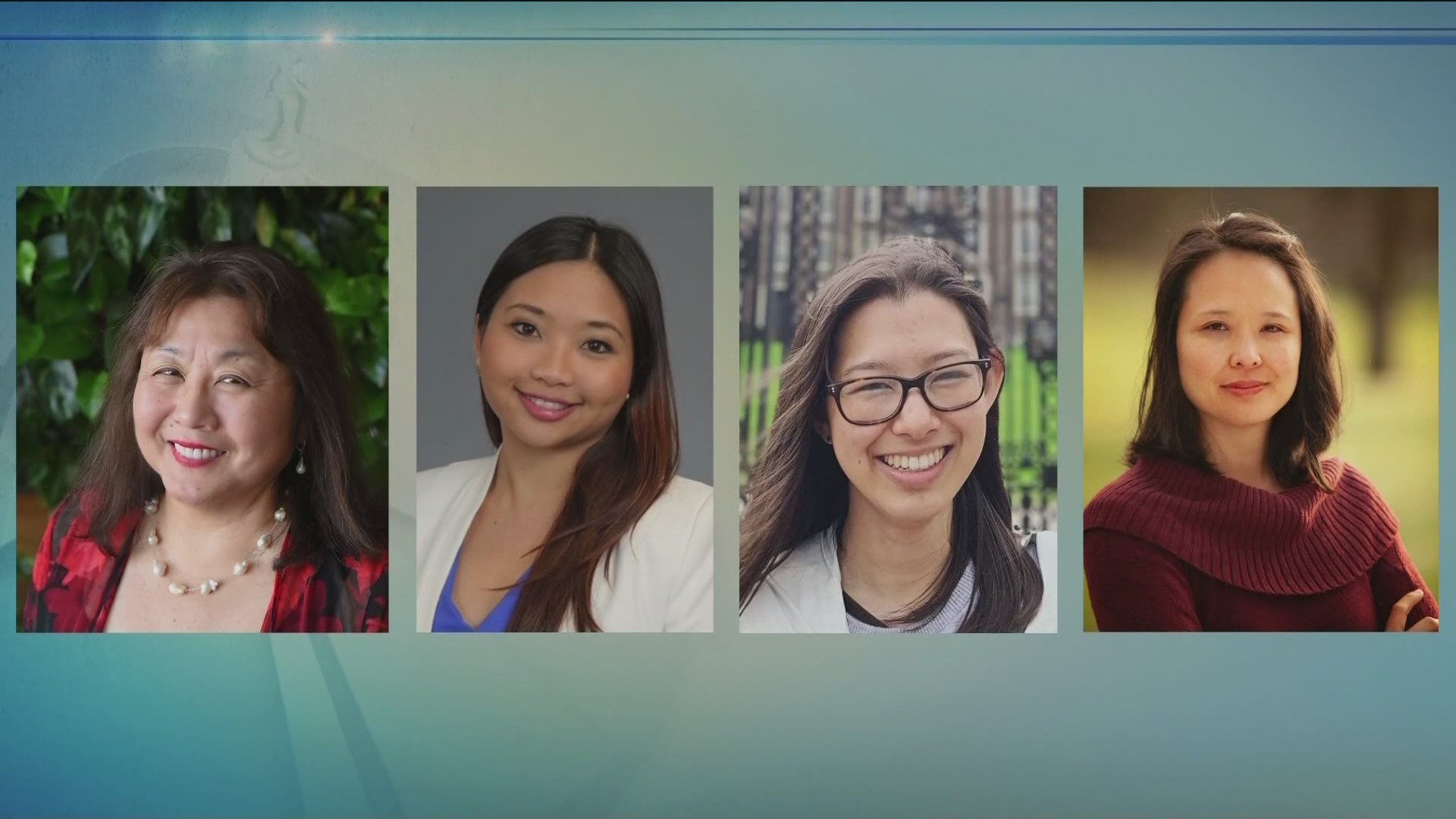 PORTLAND, Ore. — Portland attorney Peggy Nagae has made it part of her life's work to stand up to hate and racism.

Nagae was also key in helping win a Presidential Medal of Freedom posthumously for Yasui in 2015.

She was horrified by the mass shootings in Atlanta on March 16 that killed eight people, including six women of Asian descent. But she said it's an all too familiar part of this country's history of anti-Asian hate and violence.

"I've lived through this ongoing history of anti-Asian hate and disparity," she said.

Nagae's parents and grandparents were incarcerated in an internment camp during World War II.

Nagae joined three other Asian American women who are community leaders in Oregon on this week's episode of "Straight Talk" to discuss recent anti-Asian violence and how to stop it.

Kathy Wai immigrated to the US from Myanmar with her parents when she was 6 years old. She's a member of the TriMet Board and the North Clackamas School Board.

She said the anti-Asian racism has been incredibly difficult on the Asian American community and on her.

"For me personally it's been such a hard year, to deal with the health crisis and deal with the racism many of our community members have been experiencing," she said.

Wai has tried to deal with the pain by seeking community and reaching out to others in a virtual setting during the pandemic.

"I think it's important in the moment that we are taking breaks to heal, to seek community, and to share our stories," Wai said, "because sometimes sharing our stories breaks that silence."

'Another layer of concern and fear'

Allie Yee is Chinese-Japanese American. She is the development and communications director at the Asian Pacific American Network of Oregon (APANO).

In January, vandals broke windows and damaged more than a dozen mostly Asian-owned businesses in the area. Some have been hit more than once.

"I think for our communities, for our business owners, it's one more thing, another layer of fear and concern on top of everything people are dealing with in the pandemic right now," Yee said.

APANO has responded with financial help so businesses can repair the damage. She said it's a reminder of the need for investments in the community, so it can be resilient and move forward when there are incidents like vandalism.

RELATED: These are the victims of the metro Atlanta spa shootings

Oregon State Rep. Khanh Pham is Vietnamese American. She is the only Asian American in the legislature and the first Asian American Pacific Islander (AAPI) lawmaker in Salem in a generation.

She said what happened in Atlanta in the spa shootings wasn't just about racism. She said the tragedy also points to the racialized "sexual violence" Asian women face in this country and globally.

"We need to recognize that racist stereotypes about Asians, when combined with the objectification and sexualization of Asian women, puts Asian women at higher risk of experiencing discrimination and violence," Pham said.

She said the issue is compounded by low wage jobs, immigration status, and language barriers.

The bill would appoint a point person at the Department of Justice to review COVID-19-related hate crimes and also provide resources to communities to combat hate crimes.

"It's a broad brush law that would help Asian-Americans fight against this Anti-Asian hate," Nagae said.

Changing the culture: 'It's more than a hashtag'

The four women believe stopping anti-Asian hate is about more than prosecuting hate crimes, although that's an important facet.

But it requires long-term policy changes and investments in Asian American and BIPOC communities.

It's popular now to use the hashtag #StopAsianHate. But APANO's Allie Yee said real change will take a much greater commitment.

For example, Yee said the Jade District doesn't have a local park or green space. There's no public library or youth center, no place to gather within the district. Many of the streets are unsafe, including the busy 82nd Avenue.

"These are all the kinds of things that impact how neighbors connect with each other," she said. "How we build relationships, how families feel secure and thrive and help us feel seen and safe where we live.".

Rep. Pham said she’s taking a holistic approach in the legislature to supporting and protecting AAPI communities. She said it’s one that doesn’t necessarily mean more investment in police.

“But recognizing when we invest in mental health services, child care, and housing, we are investing in things people need to feel good in their community and to feel safe,” Pham said.

“Because we know housing, a stable home, is at the heart of being able to be healthy and have a stable job and for our kids to do well in school.”

Pham also wants to see investments in transportation to make the dangerous streets in her district safer.

In addition, she supports Senate Bill 778 which would create an office of Immigrant and Refugee advancement designed to lift up and serve immigrant and refugee communities in Oregon.

She warned against efforts to suppress access to voting, citing new laws being considered and passed in several states across the country.

One provision makes it a crime to offer water and snacks to people waiting in long lines to vote which often occurs in densely populated neighborhoods.

The Republican-controlled Georgia Legislature said the law is needed, further perpetuating the discredited claims of voter fraud in the presidential election.

Nagae echoed what President Biden has said, calling the laws to restrict voter access "Jim Crow in the 21st century.”

“They are about stopping, especially, communities of color from voting. And the two go hand-in-hand to undergird a condition of white supremacy in this country,” Nagae said.

Checking in with AAPI family, friends, and neighbors

“In the pandemic, a lot of people are still working from home," Wai said. "Isolation and what that can do could be compounded by what people are experiencing with anti-Asian hate."

She also encouraged people who may be struggling to reach out for help from community resources.

Wai has helped organize and attended several vigils supporting the AAPI community and spreading a message to stop the hate. She said she’s encouraged to see AAPI individuals come together to address the hate and support one another.

And she’s seen something else she feels is powerful; other communities of color joining with the AAPI community.

“I just think it’s so important in the moment to come together as people, particularly as communities that have been targeted so frequently and so historically in our country, to recognize this experience is not something completely new to us, unfortunately,” Wai said.

“Get takeout from them," she said. "Show up for them in that way."

And she called on non-Asian Americans to speak up when they hear racist slurs or jokes, or hurtful comments made casually. “Interrupt,” she said.

“We need others to speak up,” Nagae said. “White people really need to be teachers of other white people to tell them when it’s not right.”

Allie Yee and Representative Khanh Pham placed the most emphasis on making policy change and transformation.

“We’d love to see community members, our allies, our partners, to join us in supporting the policy changes we want to see and advocate for these issues,” she said.

The APANO website offers more information on ways to get involved.

Straight Talk airs Friday at 7 p.m., Saturday and Sunday at 6:30 p.m. and Monday morning at 4:30 a.m. Straight Talk is also available as a podcast.