Jordan Schnitzer and Alan Evans have partnered up to open the newly branded Bybee Lakes Hope Center. They give an update on KGW's Straight Talk with Laural Porter. 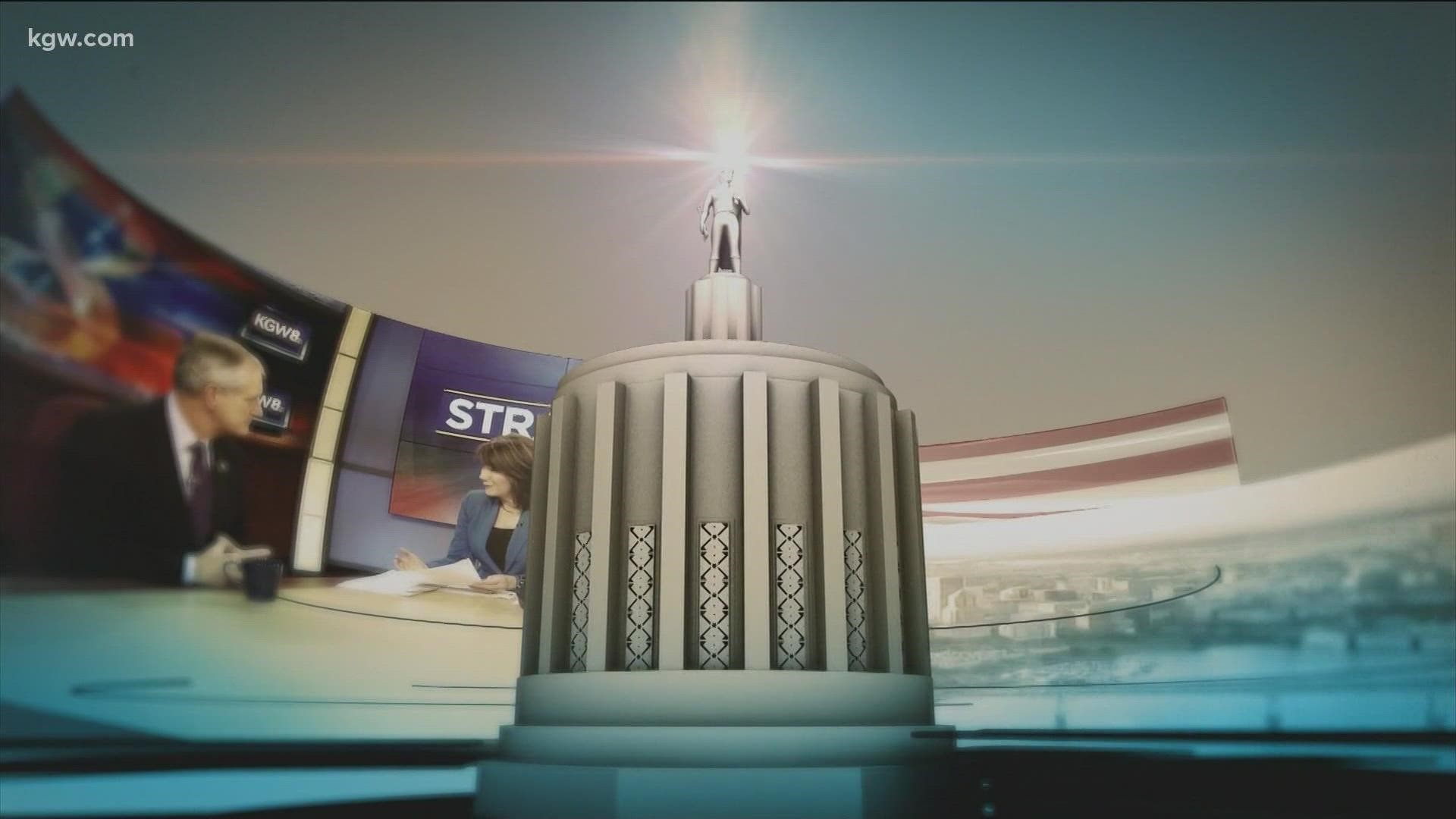 PORTLAND, Ore. — Two men. One dream. Their partnership could mean a new beginning for hundreds of people living on the streets of Portland.

The men come from very different backgrounds. One a wealthy businessman and philanthropist. The other a survivor of child abuse, a former addict who was homeless for 27 years and rebuilt his life to help others do the same.

Now, Jordan Schnitzer and Alan Evans, the CEO of the nonprofit Helping Hands, are about to do something most everyone else had given up on.

They’re on the brink of opening the never-used Wapato Jail facility in North Portland as a homeless shelter newly branded as the Bybee Lakes Hope Center.

Schnitzer and Evans shared their story this week on KGW’s Straight Talk.

'A hope and a dream fulfilled'

It will open Oct. 2 starting as an 84-bed emergency shelter. Then, in December, phase two is expected to open with 228 beds for longer-term housing and reentry programs. Next year, the number of beds will increase to 525 once all the wings are full.

“What this means is a hope and a dream fulfilled,” said Schnitzer. “And it reinforces for me never let go of your dreams. No matter the obstacles.”

And there were obstacles. Plenty of them.

Wapato was completed in 2004. It cost Multnomah County taxpayers $58 million to build. But, after unexpected budget cuts, the county didn’t have the money to open it and couldn't afford the $50,000 a month for upkeep. It was never used. And sat empty for nearly 17 years.

The county sold Wapato to the private sector for $5 million. It eventually landed in Schntizer’s hands. He had a vision of turning the sprawling facility into a homeless shelter.

The county wasn’t interested. It was 12 miles from downtown Portland. Too far, it said, from homeless services. Schnitzer looked for other partners but couldn’t find any that worked.

“I saw a dream of what could be. Everyone said this is a jail. There isn’t one cell in the 155,000 square feet. The size of the kitchen, the athletic area, the medical intake area. I called and emailed everyone I know. It just broke my heart that we couldn’t find someone to operate it,” he said.

Saved from the wrecking ball

After 18 months of searching for a partner for the shelter with no luck, Schnitzer got a demolition permit. His backup plan was to raze Wapato and build a warehouse in its place. Wapato was about to meet the wrecking ball.

That’s when he met Alan Evans at a charity event in Seaside. Schnitzer had promised all the stainless steel kitchen equipment at Wapato to state Sen. Betsy Johnson who knew Evans’ Helping Hands Reentry Outreach Centers on the coast could use it. Johnson introduced Schnitzer to Evans.

“He thanked me for the kitchen equipment and I said, ‘Tell me your story,'” Schnitzer said.

Evans said he was a bit shy when he met Schnitzer, a well-known wealthy Portland businessman. The men shook hands.

“He looked me straight in the eye and said ‘tell me your story,’ I couldn’t believe it and I realized this is a guy who truly cared and truly wanted to make a difference,” Evans said.

“He was abused as a child. He spent 27 years on the street from the time he was 14. He was a drug addict. I naively asked have you ever been to jail? He looked at me with a smile and said ‘of course,’ everyone on the street has. Probably 30-35 times. He said it was nice to get a bed and meals for a day or two,” Schnitzer said as he recalled Evans' story.

After he was caught writing a bad check, caring individuals in Seaside reached out to him and got him into a recovery house. It was the beginning of a new life for Evans.

“People would tell me you got to stop using drugs. I would tell them I can’t live with what is happening in my head. But, they couldn’t help with that piece,” Evans said.

He realized to help people like him, there needed to be a different model of treatment. One that is trauma-informed and data-driven.

That realization inspired what has now become the Helping Hands Reentry Outreach Centers. Evans now heads up 11 facilities spread across Clatsop, Tillamook, Yamhill, and Lincoln counties. The centers offer hope, help, and healing to more than 200 people a night.

And soon, Evans and Schnitzer will bring that model to the new Bybee Lakes Hope Center, named for the surrounding wetlands in North Portland.

After Schnitzer heard Evans’ story, he asked him if he’d ever been to Wapato. He had. Schnitzer asked if he could use it for a shelter and outreach center. Evans thought he could. Schnitzer gave him three days to go back and look at it and make a decision. The clock was ticking. The wrecking ball was poised for demolition.

“I drove by 400 homeless people on my way to Wapato and I couldn’t understand for the life of me why this place sat empty,” Evans said.

He told Schnitzer he was absolutely interested. Schnitzer told him he’d have to establish a Portland advisory board and raise $2 million. They did it in three weeks.

Schnitzer leased the facility to Helping Hands for five years for $1 a year.

“From a business standpoint, it wasn’t one of my better deals. From the standpoint of the lives we can help change, hopefully, we’ll get billions in good feelings that we’ve given back and helping people regain their lives,” Schnitzer said.

Now, just over a year later, they’re putting finishing touches on the interior. Bunk beds were finished this week.

And then there’s the obstacle of the COVID pandemic.

Some have questioned the wisdom of opening a shelter amid a pandemic, but Evans said they are following all safety guidelines from the Oregon Health Authority and the CDC.

“We follow a real stringent protocol in all of our facilities. We haven’t had one case in any of our 11 facilities. Safety is the most important thing; cleanliness, and making sure we get temperatures checked. Any symptomatic people are automatically sent to get tested and quarantined and we’re praying we’ll be as successful in this facility as well,” he said.

Bybee Lakes Hope Center operates on a referral basis. Partner agencies, such as the Portland Rescue Mission, Union Gospel Mission, Portland Fire and Rescue, NW American Rehabilitation Association, and NW Harbor of Hope, have gone through training on how to screen individuals for eligibility. Additional organizations, including Portland police, will go through training in October.

Bybee Lakes Hope Center does not allow sexual offenders or the use of alcohol or drugs in the facility. Some homeless advocates have criticized what they call the “high barrier, tough love” model. They said it leaves out a certain segment of the homeless population needing help.

Evans said there’s a lot of need in the community, but Bybee Lakes Hope Center is not a fix-all facility. He said the fastest growing population of people who are homeless are senior citizens and women with children.

“Those are the people we are willing to help. And we will give anybody an opportunity," Evans said. "They can use up to the day before they come to us, but when they come to us they have to be willing to go through a treatment program. But they can’t live the lifestyle they were living and be in our facility."

He said their model is to assist people who are capable and ready for a change and they’ll give everybody an opportunity. Evans said the organization and its model is built on his life experience.

“And I’ll tell you I am a success story. I am part of that. I was a guy who people said could never change their life and the best thing that happened to me was being responsible for my own actions and being given the opportunity to change my life. And we will give anybody that opportunity, but they have to follow rules. And if they don’t, they can’t be here,” he said.

Work ahead and great need

Schnitzer is excited to see the vision he had years ago for Wapato’s transformation into a homeless shelter and outreach center finally coming true. But, he knows there is a lot of work ahead.

“We’re not going to be cocky about this. The proof of the pudding is in the eating. We've got to see what happens, but I think we have the right partner. And I think we’ll show a new model in Portland,” he said.

And Evans said he’s ready to take the opportunity and make it a success. He said they’re anxious to open as they are getting calls every day from people needing placement because of the economic crisis caused by the pandemic, and now, because of the massive wildfires that have displaced thousands of Oregonians.

“There’s a need, there’s a building, there’s a guy who cares like Jordan, and he gives us this opportunity. We’re going to take that and we’re going to make this wonderful," he said.