The region's response to the pandemic with tight restrictions impacted the economy but it also saved lives, according to the latest "State of the Economy" report. 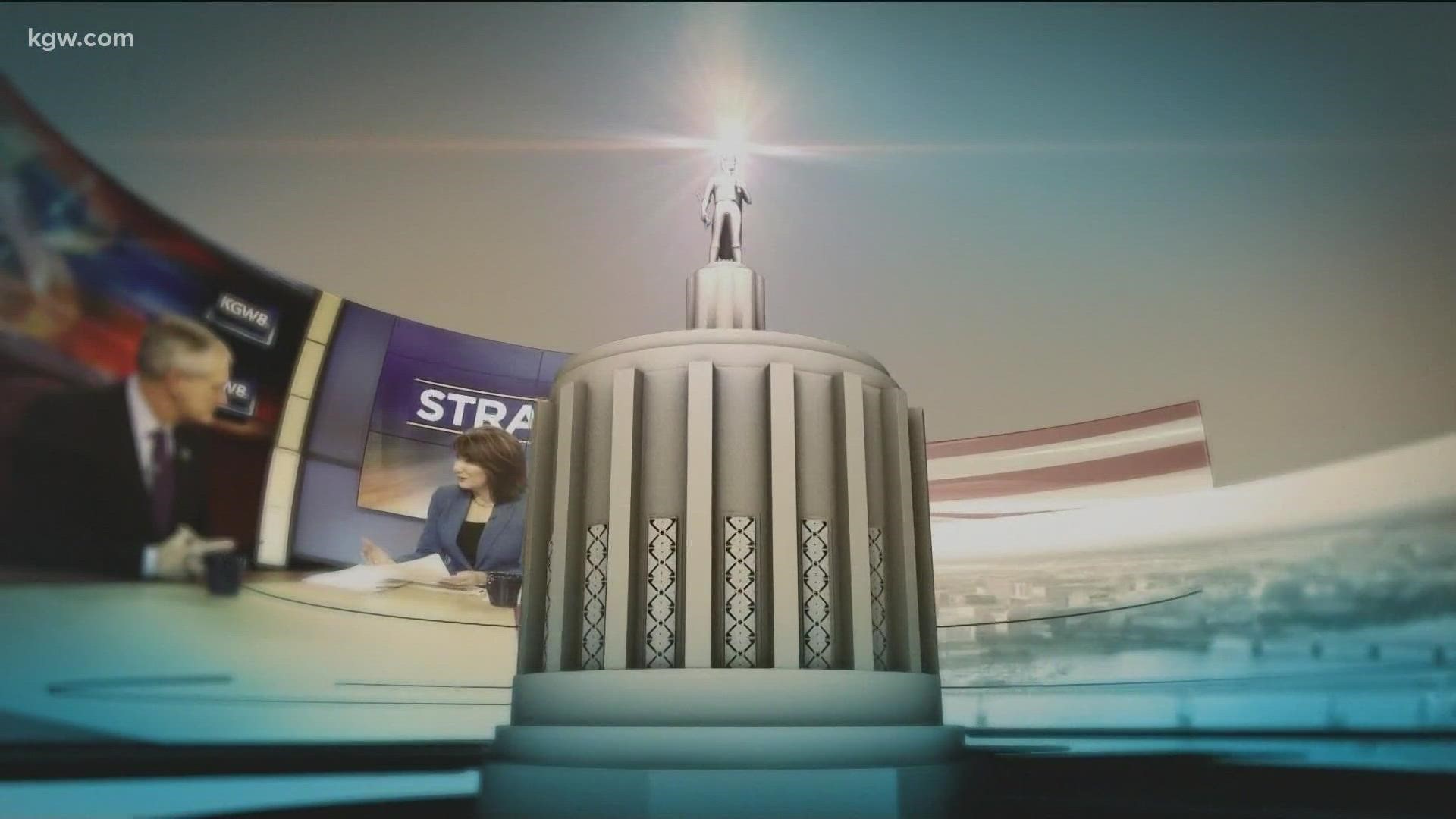 PORTLAND, Ore. — It's a tale of two very different years for the Portland metropolitan region. The start of 2020 was rosy. The region was riding a wave of the greatest economic expansion in U.S. history, one that lasted 10 years. The robust outlook was the focus of the "State of the Economy" report led by the Portland Business Alliance and the Value of Jobs Coalition. On March 13, 2020, it was the topic of an episode of KGW's current affairs show, "Straight Talk." Then, the day after the program aired, the pandemic hit, businesses began to shut down and a massive recession followed.

In addition, the police killing of George Floyd in May sparked racial justice protests around the world, and on a near nightly basis in Portland that continued for months. A year later, the economy looks much different.

This week's episode of  "Straight Talk" examines the 2021 "State of the Economy" report with guests, Andrew Hoan, CEO of the Portland Business Alliance, John Tapogna, president of ECONorthwest, and Michelle Neiss, president of DHM research.

"I would phrase this really simply as 'fire and ice,'" said Andrew Hoan. "We have had historic wildfires. We just went through historic snow and ice storms. In between it all, the pandemic, ongoing political violence, a layering of crises that has impacted the region much differently than the rest of the nation," he said.

ECONorthwest's John Tapogna described the decline in the regional economy.

"We're down 15% and it's a very unusual recession caused by something outside the economy, a public health crisis that has created tremendous inequities," he said. "It's very disproportionately impacting lower income households, small businesses and leaving other parts of the economy untouched."

The region's response to the pandemic with tight COVID-19 restrictions impacted the economy, but it also saved lives. The 2021 "State of the Economy" report said the region's response to the crisis was among the best in the nation. The infection and death rates were well below the U.S. average. The report states 2,000 lives were saved. Hoan said it's the result of the social compact made between everyday citizens, businesses and government.

He also said the consequences of the agreement and the restrictions put in place can't be ignored. But, he thinks the eventual economic rebound
for the region will be strong.

Credit: State of the Economy report
COVID-19 deaths per 100,000 people in the Portland metro area vs. the United States

DHM Research conducted a poll in December to get a pulse check on voter sentiment throughout the region. DHM's president, Michelle Neiss, said there's a lot of uncertainty about what the future holds. She said people polled are fatigued by the toll the pandemic is taking, and an increasing number of people feel the region is headed in the wrong direction.

"There's concern about the quality of life right now," Neiss said. "We did make the pact to save lives, but by December people are getting fatigued by the toll the pandemic is taking. The number of people who think we are headed in the right direction has dropped to 32%."

The poll showed 42% of respondents said the region is on the wrong track.

Credit: State of the Economy report
Trend of where people believe the direction of the region is heading

"I think it tells the story of the industries impacted and also the reality our schools have closed," Hoan said. "Children are at home. They're learning at home and we've seen a disproportionate impact on women in the economy."

Before the pandemic, during the economic growth, Black, Indigenous, Hispanic/Latinx, and Asian households did not see the same economic lift that white households did. But the gap was narrowing. The current recession has erased those gains.

"Just by the end of the record setting economic expansion, we were starting to see some improvement in median household incomes among Black, Latino, and Native American households. And this just undid a lot of that," Tapogna said.

The report showed in December 2020, nearly one-third of Black households said it was very difficult to pay usual monthly expenses. Tapogna said it can be linked to where jobs have been lost during the pandemic and the resulting shutdown. The leisure and hospitality industries have been hit hardest and he said people of color disproportionately work in those sectors.

The "State of the Economy" report also took a look at damage to Portland's reputation. It states, "national coverage of civil unrest and property destruction has taken a toll in underlying capital and insurance markets." John Tapogna pointed to what he called a "worrisome trend."

The Urban Land Institute, which surveys real estate investors, bankers and others who provide money to build housing and commercial development in the Portland area, has downgraded Portland's rating.

The report states total building permit applications in the city of Portland were down 27% from May to October 2020.

"Construction of new apartments in the pipeline appear to be in a freefall, down 37%," according to the "State of the Economy" report.

It concluded the region is entering a period of underproduction which will continue to put upward pressure on prices and rents.

However, there are hopeful signs, according to Tapogna. Recent surveys of tourists indicate positive sentiments toward Portland may be picking up. The Portland Business Alliance's Hoan agreed there's some good news.

"Our partners at Travel Portland that does external work on how we are perceived by the rest of the nation, all of it is trending back in the right direction," he said.

Hoan said whether the city can return to what he called a "new normal" will depend on confidence.

"And that confidence we establish by having the basics return. Public safety, cleanliness, the ability to serve the homeless in a compassionate way. That will send a message that we need to have which is this city functions," Hoan said.

"I remain bullish on Portland," he said.

"Homelessness has been a top concern in the tri-county area for several years. The pandemic has just elevated it," said DHM's Neiss. "We can see people who have been hit economically and don't have a place to live."

According to the DHM survey, the next three issues receiving the biggest mentions were crime, COVID-19 and the economy. In last year's survey, they were non-existent or barely mentioned.

Credit: State of the Economy report
Homelessness is biggest area of concern for people in Portland metro area

Israel: A postcard from the future

John Tapogna said vaccines are the key to the region's economic rebound. He said Israel can give us a glimpse into what may lie ahead.

A New York Times article called it the most extensive worldwide test so far, where Israel’s "robust vaccination program has had a quick and powerful impact." Cases of COVID-19 and hospitalizations dropped dramatically in Israel.

"By last count, they had up to two-thirds of their population inoculated with at least their first dose of the vaccine. So, it does become a postcard from the future," Tapogna said.

Andrew Hoan outlined what he sees as the path to the region's economic recovery. He said first and foremost, it means getting back to the basics and making sure people have confidence that basic services will be delivered.
He said there needs to be a focus on affordability and building more housing.

He also said it's critical the nation, the region, and the city of Portland seriously address racial inequities.

"We are at an inflection point," Hoan said. "We are going to rebuild. We are going to recover. But, clearly the racial inequities in our region and our nation have to be fixed. Now, is the time to do it.".

The "State of the Economy" report also put a special focus on the impact eight new local taxes are having on household budgets. The report said, "the increase of tax incidence to households, coupled with the freefall in housing construction, have set our region on a path of increasing unaffordability."

In this episode of Straight Talk, guests discussed why that matters and what policymakers should think about in the future when considering new taxes.