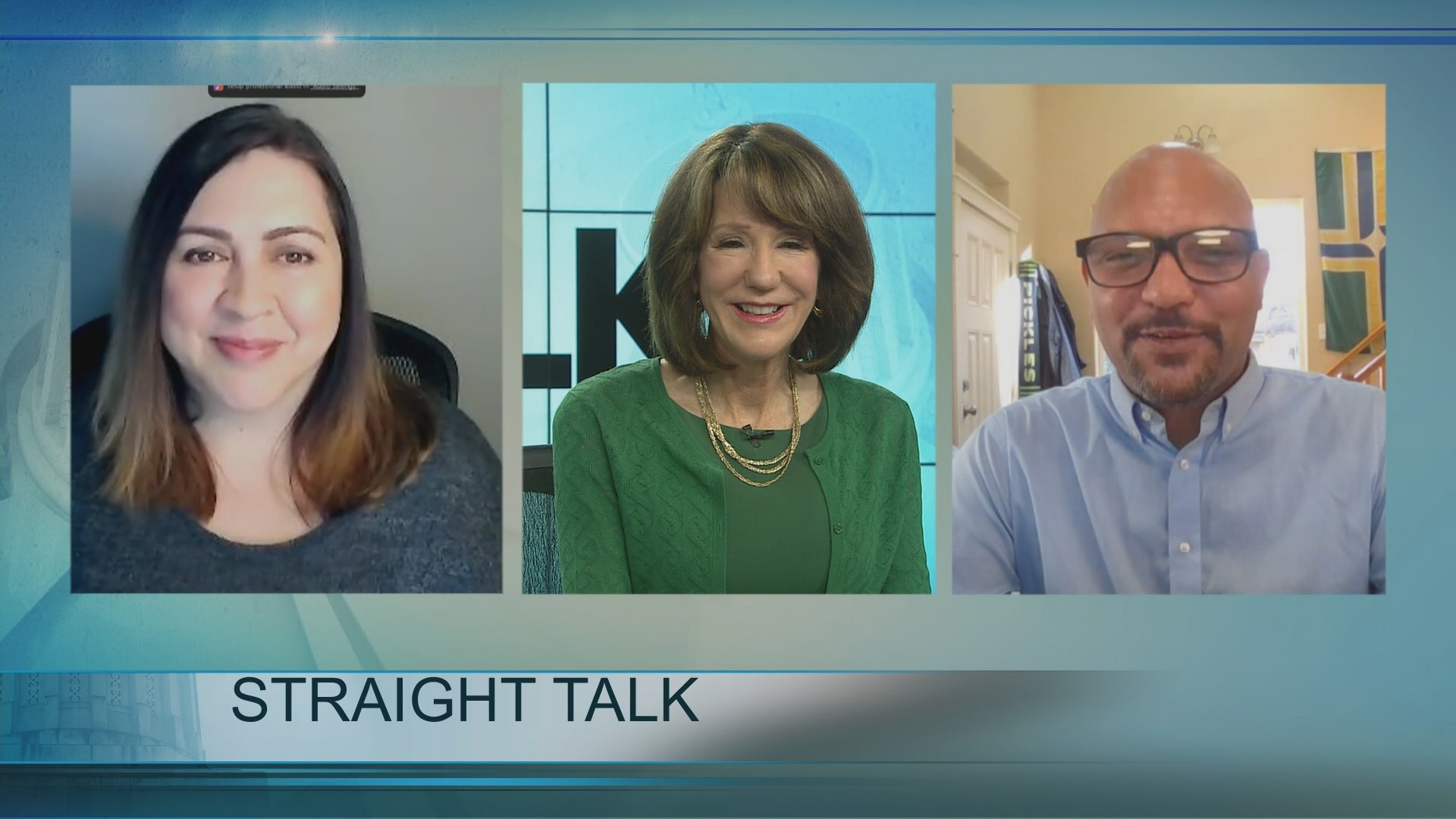 PORTLAND, Ore. — Portland's two newest city commissioners, Mingus Mapps and Carmen Rubio, were sworn into office on Jan. 1 with big plans to move the city ahead in 2021.

Days later, they watched with the rest of America as a violent mob of pro-Trump extremists stormed the U.S. Capitol in an attempt to overturn President-elect Joe Biden's win in the November election.

During a taping of KGW's Straight Talk, Both Mapps and Rubio described what happened in Washington, D.C., as shameful and called for accountability. However, they said they're not just concerned about the actions they saw in the nation's Capitol. They see violent actions closer to home that also concern them.

"It breaks my heart," said Mapps. "But I'll remind folks that it was just last month we saw something similar in our state Capitol."

Mapps also cited the violence and damage to businesses in Portland from ongoing protests against racism and police brutality.

"The property damage and violence in Portland is fundamentally unacceptable," Mapps said. “That's why I think it's important we as a city and nation come together to denounce violence. That's something to think about on this day. A couple days from now, it's Martin Luther King Jr.'s 92nd birthday."

"We have work to do at home, too," said Rubio. "We have to have hard conversations together. We are in the midst of this national reckoning and reconciliation about our nation's history of racial injustice at a state and local level."

Rubio and Mapps said there is no room for hate in Portland or in Oregon.

Rubio took the lead in writing a letter, signed by the entire Portland City Council, calling for the resignation of a newly elected commissioner in neighboring Clackamas County.

Mark Shull is under pressure to step down after it came to light he had made racist and Islamophobic posts on social media.

Rubio said there was no doubt in her mind writing the letter, calling for Shull to resign, was the right thing to do. She said the Portland City Council acted swiftly in its condemnation of Shull.

The letter read in part, "Following last week's armed insurrection attempt in Washington, D.C., this accountability is more important than ever. Our state has a long and continued history of white supremacism and there is much work to do to continue to break down its influence on our government institutions."

Rubio said it's not a matter of disagreeing over opinion. She said elected leaders are elected to serve all their constituents regardless of background, race, or religion.

"So, it's reprehensible we would have someone in office who has clearly been open about not viewing people in an inclusive manner," she said.

Reaction to assault on Mayor Wheeler

Mapps and Rubio said they were troubled by the assault last week on Mayor Ted Wheeler as he was having dinner outside at a Northwest Portland restaurant. A small crowd confronted the mayor, yelling and cursing at him, and one woman hit him in the shoulder.

The mayor wasn't hurt and said with the tenor of local and national political discourse, it's not unusual for him and other elected leaders to be confronted.
He said, "It's part of the job."

Rubio said she thinks the mayor was conveying that public criticism is to be expected and that it's their job, as elected leaders, to listen. But she said aggression and physically harming someone is not OK.

Mapps said he was horrified by what he saw in a video of the confrontation with the mayor.

"Any sort of violence designed to change our politics is outside the traditions of who we are as Portlanders and who we are as Americans," he said. "That's why I talk about the politics of peace."

Big challenges ahead with bureau assignments

Under Portland's unique form of government, Mayor Wheeler assigns a portfolio of bureaus to each commissioner to run.

Mapps said he's excited to partner with those agencies. He called the Water Bureau's task of delivering 100 million gallons of water daily to Portlanders "an incredibly complicated massive task."

"It has to work perfectly. Twenty-four hours a day, seven days a week," he said. "I am delighted to work on these challenges and with the best public servants I can possibly imagine."

The city's brand new and much anticipated program, the Portland Street Response Team, started training this week. It was delayed because of the COVID-19 hiring freeze.

It's patterned after a program that started in Eugene called CAHOOTS. Like the Eugene program, the Portland Street Response Team will take calls involving non-violent mental health crises or ones related to people who are homeless, in place of police.

RELATED: Amid calls for police reform, 'hold up in HR' blamed for delay in Portland Street Response launch

Commissioner Jo Ann Hardesty has been the biggest backer of the program, and it will mostly fall under the Bureau of Fire and Rescue, which she manages.

Commissioner Mapps' Bureau of Emergency Services, which handles 911 calls, will also be working with the team.

"When these calls come in, we need to know where and how to direct them," Mapps explained. "We are working really hard in close collaboration with the police to figure out how we get this done."

The program will begin in the Lents neighborhood and Mapps said he's looking forward to seeing it expand citywide.

Commissioner Carmen Rubio's bureau portfolio includes Parks and Recreation, the Bureau of Planning and Sustainability, the Office of Community Technology, and Arts and Culture.

Rubio said her vision for parks is much like that of her friend and mentor late Commissioner Nick Fish, who also managed the parks bureau for a time. She called expanding access to the city's parks her priority.

"I want to expand access to all families in Portland, in particular families in need, or who are under-served, Black, Indigenous, communities of color, working families, also East Portland, and people who live in park-deficient areas," Rubio said.

She called the parks levy passed by voters in November a good first step toward making that goal a reality.

Rubio described the problems she saw firsthand while working with families in her role as the executive director of the Latino Network.

"Moms of school-aged children with only one Chromebook," Rubio explained. "Or a whole family accessing the internet through just one Smartphone. We've come to understand access to the internet is a luxury, but now it's not something nice, it's a basic need for people."

She said she's eager to get to work to see what they can do to close that divide.

One of the first significant city council votes for Rubio and Mapps involved a change in an urban renewal zone to fund $67 million for affordable housing and economic development in North Portland around Legacy Emanuel Hospital.

In the 1970s, mostly Black families had their homes condemned by eminent domain to make way for an expansion of the hospital. The money approved by city council would fund affordable housing, family homes to own, and a hub for small businesses owned by Black people and other people of color. Mapps said he expects the money will translate into 350 new units.

"It's also focused on home ownership, and home ownership is a great way to reduce the wealth gap between the BIPOC community and our white neighbors," Mapps said.

He said he knows it won't solve all the problems and pain, but that it's a beginning of the healing.

"This program fights the legacy of displacement by giving preferential treatment to folks who have roots in particular neighborhoods in North and Northeast Portland," he said.

A group of Black Portlanders called the "Emanuel Displaced Persons Association 2" wants restitution for those whose homes and businesses were lost.

Rubio said she agrees with the group's call for accountability and reparations. Mapps believes the federal government bears responsibility for not holding up its end of the bargain in delivering the affordable housing promised.

"I pledge to work with those families impacted by that to help hold the federal government accountable," he said.

KGW explored the displacement of Black families in North and Northeast Portland in a 1980 documentary called "Albina."

When asked about her hopes for 2021, Commissioner Rubio said she had three main wishes. A successful vaccination deployment so everyone is protected and healthy. More housing built by the city and metro housing bonds, and meaningful movement in how the city reimagines public safety for all who live in Portland.

Commissioner Mapps agreed that making sure commissioners do everything they can to get vaccines into people's arms quickly is a top priority. He also said he's concerned about economic recovery and looks forward to getting businesses and schools back open.

And he said the record homicide rate in Portland is unacceptable.

"I'll work hard every day to help restore peace to our streets," he said.
"We've got to get back to the Portland we all know and love."