Commissioner Dan Ryan responds after protesters vandalize his home: 'We need common sense to take over and take our city back'

Ryan said the damage says little about the big picture of Portland, but a lot about a small group of people igniting more stress during a difficult time. 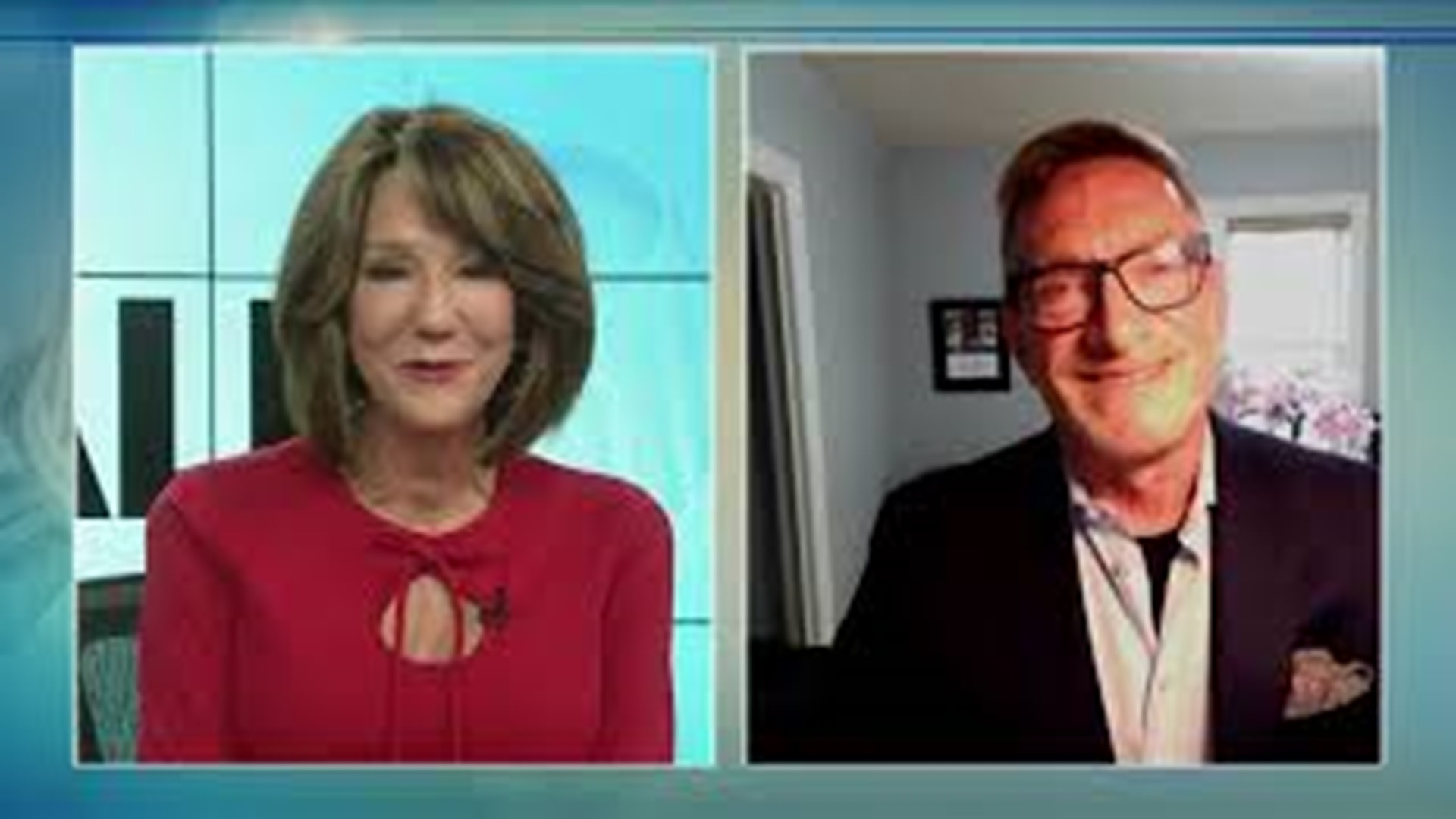 Ryan appeared on KGW's "Straight Talk" shortly after he returned home to see the mess.

"It's been difficult to look at. The sad thing is I was expecting it and was prepared," he said. "My fiancé and I were safe. And we're in communication with our amazing neighbors on the block."

The group marched to the commissioner's house late Thursday, hours after the city council, including Ryan, voted against a proposal to cut $18 million from the Portland Police Bureau (PPB) budget. During months of protests, demonstrators have demanded cutting the police budget by $50 million.

When asked what he thought the destruction and violence said about the political environment in Portland, Ryan said it’s limited to a few people who he says aren’t on message on any of the issues facing the city, and it’s time to put a stop to it.

“I think it says very little about the big picture of Portland. It says a lot about a small group of people that are taking it upon themselves to ignite more stress during a very, very difficult time in our city,” he said. “We have to call it out. We need common sense to take over and take our city back."

"Fighting for systemic change is messy and complicated, but what shouldn't be complicated is recognizing when lines have been crossed, and that's what happened last night," Hardesty said.

Not the first time protesters showed up at Ryan's house

It's not the first time protesters have shown up at Ryan's house. And Ryan thanked his neighbors for all their support over the past several days.

On Oct. 28, the night before the city council was scheduled to hear initial testimony about the budget cuts, dozens of protesters paid a surprise late night visit to Ryan's house.

"I was probably more asleep than awake and the doorbell kept ringing and ringing and we started hearing 'Dan Ryan, we know you're in there. Come out, Dan Ryan.' And my fiancé and I made a quick decision in this time of crisis, if you will. We decided to go out and de-escalate the noise," Ryan said.

Ryan said he was concerned about his neighbors, many of whom he described as elders, many who don't speak English well.

"I didn't want them to be triggered by all of this noise," he said. "So, my fiancé asked for some ground rules. And that cameras be turned off."

Controversy over handling of the press

That request caused some controversy as reporters from The Oregonian and Oregon Public Broadcasting said Ryan and his fiancé, Amo Reyes, had suppressed the First Amendment rights of the press. Ryan said he didn't realize the press was there and he doesn't feel, in the end, the First Amendment was stifled.

"I always look at what the results are, and all I know is the First Amendment was alive and well," Ryan said. "Everything was recorded and there's plenty of footage. I have a fiancé, who is fierce, and was just trying to protect the person they love."

Ryan listened to protesters' concerns for about an hour and exchanged numbers with a few people. He said his office is in touch with them.

The demonstrators' actions stem from the city council vote on an amendment proposed by Commissioner Hardesty to cut the bureau's budget by another $18 million. The council already agreed in June to cut the police budget by $15 million.

Commissioner Chloe Eudaly also supported the additional cuts and Ryan was seen as the swing vote. On Thursday, he joined Mayor Wheeler and Commissioner Fritz in voting against the amendment.

"The people have spoken. And I'm pretty sure they're just as disappointed as I am with the lack of courage in this historic moment where, just for a second, Black lives mattered in Portland," Hardesty said.

"At a time when we have unprecedented crime, and upticks, and people aren't feeling safe, it was very important not to make such a drastic cut," he said. "It didn't pencil out. It made no sense and we heard from a lot of people who didn't want this change at this time."

Ryan also said the council has already cut $27 million from the police budget in the current fiscal year and he also wants to give the new police chief, Chuck Lovell, a chance to succeed.

When asked what police reforms he wants to see, Ryan said he's looking for a culture change and more community policing.

"The community wants a police department connected to other first responders that have a guardianship component. We need more community policing to build relationships on the streets," he said.

He pointed to what's happened in his neighborhood as a result of the protests at his house.

"If there's one little micro-example of this; my neighbors are getting to know the police in the area because of these incidents. And it's the relationships that really matter," Ryan said.

Ryan was elected in a special election in August to finish the term of the late Nick Fish, who died of cancer in January.

Ryan's early days on the council have been described as a "trial by fire." He agreed it's an appropriate metaphor, but sees himself as fortunate given the challenging circumstances so many Oregonians are facing.

"I was sworn-in on a day that the air quality was so bad (from the smoke from the wildfires) that we were all locked in for over a week," Ryan recalled. "My heart goes out to those many Oregonians who are still recovering from the horrific damage. I also know Portlanders are experiencing 'trial by fire' ever since COVID hit. So, I'm pretty fortunate to be in a position, and I think it's a really good fit for me to serve the city."

In January, new faces will join the Portland City Council. Carmen Rubio was elected outright in the May primary for the seat currenlty by Commissioner Fritz, who is retiring. And Mingus Mapps defeated incumbent Chloe Eudaly in the November general election.

Ryan said he thinks they have a great team of five and hopes they can all get behind collective wisdom to focus on three top priorities: the homelessness crisis, the economic recovery and building the country's best and most successful community safety system.

Ryan is in favor of changing Portland's current commission form of government where commissioners are in charge of individual bureaus. He'd rather see that changed to one with a city manager, so commissioners can focus on the big picture.

"I want us to grapple with those issues and not get stuck in our silos of a bureau and actually stay focused on those top three issues," he said.

Surveys consistently show homelessness is the top priority for Portlanders. Ryan agreed and called the crisis out of control.

"It's sad. I want to talk about it more as a public emergency, a health emergency," he said. "It's time to compassionately relocate houseless residents off the public sidewalks, parks, and bikeways and provide humane shelter with real services. It's time to be compassionate and caring, and allow others to access our public right of ways."

Ryan said with the holidays coming, he wants to help the city to once again bustle with activity and get the currency flowing. He said he knows businesses are hurting and can relate more than ever to what they're going through.

"Our small businesses have really been suffering. I have more empathy than ever after what happened last night," he said in reference to the vandalism at his home. "We need to clean up the mess, take down the boarded up windows and open up."

Ryan sees dealing with the homelessness crisis and economic recovery dovetailing with his vision for reforms to the community safety system and the culture of the city.

"It's the excitement I have for really diving into radical reforms, not just the police, but throughout the city. It's time for us to be humble about how we can change the culture of the city," he said.

He also said it would be important to work closely with the county in the tough economic times where efficiencies are going to be important.

Tweed also looked ahead to the future of the Republican party as the Oregon GOP continues to face a Democratic super-majority in the Legislature.